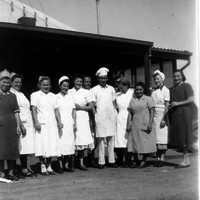 The Willaston hostel was administered by the Commonwealth Government, and housed Displaced Persons from Europe.
1952

Willaston Hostel shut and any remaining Displaced Persons in residence were moved to other hostels.
1955

When the Willaston hostel re-opened it housed British migrants.
1956

Willaston, near Gawler, operated for two distinct periods, the first housing Displaced Persons, the second British migrants. Despite some early tensions, the local township of Gawler actively welcomed migrants into the social life of the community with a variety of concerts, parties and outings.

Willaston Hostel operated from 1949 – 1952 and again in 1955 – 1956. It was located in the former Royal Australian Air Force (RAAF) camp, now the site of the Elliot Goodger Memorial Park, in Gawler. The hostel was administered by the Commonwealth Government>

Buildings from the former RAAF camp were converted for accommodation. The conversion took place in stages and was done to Commonwealth Government standards for migrant hostels. These specified everything from the minimum area for rooms (100 square feet for a two bed room) to the lining of floors with linoleum.

There were communal toilets, showers, laundries and dining. A number of migrants were employed in the kitchen, including several Polish and British migrants during both phases of the Willaston hostel’s operation. There was a recreation hall and bike shelter on site. Residents used the local Gawler hospital.

Existing buildings were timber framed with corrugated iron walls and corrugated asbestos cement roofs. New buildings were also constructed to increase the capacity of the hostel in three stages from 1949-1951. Between 300 and 500 people were housed at the Willaston hostel at any one time.

I remember it was dusty. … There was no bitumen I think I had a happy time in Gawler, because there were so many children that you could play with, and we used to have fun. Cess Batten and Judy Gowland (formerly Hasiuk), Willaston 1950-1952, interviewed 2013

From 1949 to1952 Willaston housed Displaced Persons and a smaller number of assisted migrants from Europe. When the hostel re-opened in 1955 it accommodated British migrants exclusively.

Single men were sent to the Willaston hostel first, followed by women and children in 1950. Early reports focussed on migrants from the Baltic states (Estonia, Latvia and Lithuania), though Displaced Persons came from a range of European countries.

Local newspaper reports reflect some early tensions, with one Gawler Councillor publically opposing the establishment of the ‘migrant camp’. After the Willaston hostel opened there were some disputes between residents, property damage and a fire which destroyed a building in 1950. The overwhelming response of the local population appears, however, to have been welcoming. The Good Neighbour Council, Girl Guides, Junior Red Cross, the Williamstown Ladies Bureau, and even the Sheaoak Log Bureau were among the organisations that visited the Willaston hostel and staged events and activities for residents. Migrants from the Willaston hostel also took part in performances in concerts at Gawler. In 1949 a resident of the Willaston hostel won first prize in the local talent quest for his accordion playing.

The Gawler National Trust Museum has a display about the Willaston hostel featuring photos of local residents who lived and worked at the hostel. 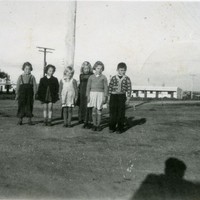 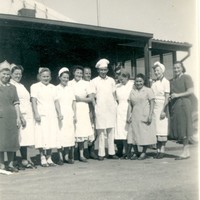 Thanks for sharing Roman,
From what I've heard your father's experience with work and transport was fairly common, bikes were an affordable option while people were saving for homes. The Gawler National Trust Museum has a display about the Willaston Hostel if you're interested.

I was a small child when we lived in the Willaston Hostel, so I have no memory of it.
I do know my father often rode his bike to his work at Kelvinator ( in Finsbury I think)