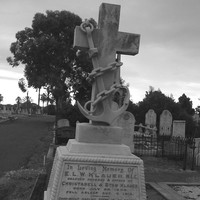 Colonel William Light’s 1837 plan for Adelaide included a 32 acre cemetery located in the southwest corner of the Adelaide parklands. The cemetery immediately became controversial, particularly in regards to its location—upwind from the city and in an area with a high water table—and on 5 August 1839 a management committee, consisting of Surveyor General Captain Charles Sturt; Colonial Secretary Robert Gouger; and the first Colonial Chaplain, Reverend Charles Beaumont Howard, created a document setting out how the cemetery would be managed. Along with allocating funds for a gardener’s lodge, fencing and pathways this document set the terms for leasing of burial plots, specifically that they would be 18 by 18 feet (5.4 metres) and could be leased for a period of ninety nine years (Muller 2006:28-29) at a cost of one shilling per superficial (board) foot with an additional annual rental fee of threepence per foot South Australian Register, 12 September 1891, p5). Additionally, 'no lessee was to be allowed to leave the colony or resign to the trustees the care of the ground held by him without paying, in advance, the amount of the annual payment for seven years'. The first lease was granted to Robert Gouger in 1839 and the first registered burial at the cemetery (James Laffan, died 2 July 1840, aged 30), then called the Adelaide Public Cemetery, occurred in mid-1840 (Muller 2006:27), although approximately five hundred people, for which there are no records, had already been unofficially interred on the site.

Early on in the cemetery’s history provision was made for the erection of monuments and chapels, although, bar the Smyth Memorial Chapel none of the later were ever applied for (South Australian Register, 12 September 1891, p5), and numerous rules were applied as to how the graves would be laid out. A number of curving roads of 14 feet (4.2 metres) in width were created to facilitate access to the site and no grave was allowed to be placed within 7 feet of the edges of these. In addition, 3 feet (0.9 metres) was to be left between each grave (Muller 2006:29). The town surveyor was ultimately in charge of where a grave would be located—although the minutes from the West Terrace Management Committee’s 3 October 1839 meeting note that people 'can select any spot in any section on application to the sexton' (GRG 38/17:4-6)—and until 1847 the desired inscription had to be cleared by the cemetery’s trustees. This initially led to some degree of censorship, as famously illustrated by the case of Captain George Martin. One of South Australia’s earliest colonists Captain Martin had fallen upon hard times and in mid-1841 was imprisoned within the Adelaide Gaol as an insolvent debtor (Southern Australian, 10 August 1841, p3). Following his release he continued to struggle financially, and on 24 February 1842, suffering from a 'depression of spirits' (Southern Australian, 25 February 1842, p3) exacerbated by the 'verdict of £20, which had been obtained against him in the Resident Magistrate’s Court on the previous day', Captain Martin committed suicide, shooting himself in the head in the agricultural produce store rooms he occupied in Currie Street. Having been left virtually destitute by his death, his widow and eight surviving children were provided with a small subscription in the aims of enabling them to commence some small business, however, their disappointment with Captain Martin and the circumstances of his death were evident in their choice of inscription: 'His death was accelerated by disappointment… They have spoken against me with a lying tongue and fought against me without a cause'(South Australian Register, 12 September 1891, p5). The headstone bearing this inscription had been erected with the consent of only two of the cemetery’s trustees and once the committee decided that the sentiments were unfit for public viewing (GRG 38/17:16-18) it was quickly removed. The issue did not end there, however, as in 1847 the trustees received a letter from a lawyer of one of Captain Martin’s relatives protesting the removal of the headstone and forcing them to replace it with another which omitted the offending inscription.

The division of the cemetery

Following the European tradition of dividing burials by religious denomination, specific, independent sections were created in the cemetery very early on. At the request of Mr. AL Montefiore, the Jewish section was the first to be separated from the general cemetery in 1843, then the Roman Catholic section in 1845, following the designation of Bishop Francis Murphy to the see of Adelaide in 1843 and his arrival in the colony in 1844. The Catholics not wishing to be subject to existing regulations were granted land outside the existing cemetery. Located to the north and initially four acres in size and with its own entrance, the Catholic section underwent multiple expansions over time to encompass some of the unused Jewish and Quaker sections and extend westwards to the railway line. The Anglican section of the cemetery was divided off in 1849 and is located mostly in the south west of the general burial ground with a smaller section surrounding the existing grave of Reverend Howard (died 1843) to the north (Muller 2006:30). The Quaker section was the last independent section to be divided in 1855. There are also smaller non-independent faith specific sections set aside within the General Cemetery including one for ‘Afghans’ (Muslims) which was formed in 1896 and expanded in 1925 and another for Druzes formed in 1928 (Peake 1984). The final section of the cemetery was not divided based on faith but on service in the Australian Imperial Forces (AIF). Using funds raised by the Cheer-up Hut Society and the Soldier's Welfare Combined Recommendation Committee, and matched by the State Government on a pound by pound basis up to £2500, in 1920 the AIF Garden of Memory Cemetery was formed. The first burial, of Private J.G.J. Hannan occurred on 23 May 1920 and the last (P.R. Inwood) in 1971 (Adelaide Park Lands Preservation Association Inc. 2015:4). Service in the First AIF was a requirement for burial in this section of the cemetery—the graves of those who served in the Second AIF are located in Centennial Park and other cemeteries—and headstones detail name, rank, unit and serial number and date of death. Names of family could be included in the inscription if required but family members of servicemen and women were not allowed to be buried within the AIF cemetery. This cemetery is now full with a total of 4155 graves surrounding a Cross of Sacrifice.

Costing nearly £500, designed by E.J. Woods (designer of the Adelaide General Post Office and Town Hall) and built as a memorial to Father John Smyth (Administrator of the Catholic Archdiocese of Adelaide and Vicar General), the Smyth Memorial Chapel was officially opened on Sunday 21 October 1871 (The South Australian Advertiser, 23 October 1871, p2). The octagonal, bluestone chapel, located in the Catholic Cemetery, is one of only a handful of mortuary chapels within major cemeteries in Australia (Adelaide Cemeteries Authority n.d.:3) and is listed on both the South Australian Heritage Register and the Register of National Estate. Both Reverend John Smyth (1824-1870) and Bishop Sheil (1815-1872) are interred there.

Although cremation was legalised in 1891, South Australia’s first modern crematorium (also the first in the southern hemisphere) did not open at West Terrace Cemetery until 1903. Built in Gothic Style with the chimney “disguised as an Italianate bell tower” (Adelaide Cemeteries Authority n.d.:4) the crematorium cost around £1700, approximately half the cost of those in the northern hemisphere (The Advertiser, 6 May 1903, p4). The first cremation was that of Bishin Singh on 4 May 1903. Unfortunately Singh’s cremation did not go exactly as planned, it was reported in The Advertiser (6 May 1903, p4) that although a temperature of 1800°F (approximately 982°C) was reached this was insufficient to fully burn the larger bones. Although the process of cremation was of immediate fascination to many South Australians, it was much slower to gain widespread acceptance and for the first twenty or so years of its operation the Adelaide Crematorium saw no more than thirty cremations a year (Adelaide Cemeteries Authority n.d.:4). People did eventually come to accept the process, however, and by the crematorium’s closure in 1959 a total of 4762 people had been cremated there. The Adelaide Crematorium was demolished in 1969.

A number of other structures stand, or have stood in the cemetery grounds. Following the continued vandalism and destruction of the original wooden fence, in 1854 approximately £6700 was budgeted to construct a stone and iron wall around the cemetery, along with new gates and a lodge for the Superintendent. This lodge was constructed in 1857 (and extended in 1863 and 1877) and replaced the original wooden Sexton’s cottage (c.1843).  In 1907 it too was replaced by the cemetery office building still in use today (Muller 2006:32–34). A 'dead house' (morgue) was also constructed in approximately 1854 and demolished in the late 1920s while a Metahar House (Jewish chapel) also once stood in the Jewish section but was replaced in 1968 by a building which was then demolished in the 1970s (Muller 2006:35–36).

A large number of South Australia’s early and prominent settlers and their descendants are buried in West Terrace Cemetery along with religious figures, businessmen and women, sporting heroes, musicians, scientists and other prominent Adelaide personalities. There are also a number of more unusual internments and headstones such as that of the Somerton Man (a man found on the beach in 1948 whose identity is an enduring mystery), a Greek Archbishop buried three metres deep sitting on his throne, a woman (Georgianna Thomasina Desvignes Poole, died 1892 aged, 84) whose inscription identifies her as the granddaughter of Count Hubert Desvignes “who with his wife was guillotined with Louis XVI King of France”, and a headstone shaped like a drum marking the grave of a musician killed in an accident at Devil’s Elbow. Many Indigenous people are also memorialised at West Terrace Cemetery including Ngarrindjeri man Poltpalingada Booboorowie (also known as Tommy Walker). Booboorowie was a popular Adelaide personality and upon his death on 4 July 1901 the Adelaide Stock Exchange raised the funds for his headstone. In 1903, however, it was discovered that Dr William Ramsay Smith, city coroner and head of the department of health, had taken Booboorowie’s remains before burial and sent them to the University of Edinburgh as an “anthropological specimen”. Smith was suspended in 1903 and charged with eighteen counts of the misuse of human remains; however, he was later exonerated, reinstated as coroner and continued to illegally collect remains both through his work and by robbing graves. A thoroughly unsavoury character Smith was also known for practicing his marksmanship on corpses, selling Indigenous artefacts for profit, plagiarising at least one of the books published under his name, and for the 182 human skulls found in his home upon his death in 1937. Poltpalingada Booboorowie’s remains were repatriated in 2000 and buried at Raukkan, an Aboriginal community on the southern shore of Lake Alexandrina.

Since 2002 the West Terrace Cemetery has been administered by the Adelaide Cemeteries Authority who also manage Cheltenham Cemetery, Enfield Memorial Park and Smithfield Memorial Park. The cemetery is open to the public every day of the year and a number of tours, both guided and self-guided are offered, including night tours and tours focused on early pioneers, criminals and law enforcers, notable women, notable sportspersons, ANZACs, and people with unusual deaths or funerals as well as the natural landscape of the cemetery and the fauna and flora found within. Burial still continues at the cemetery in the Wakefield section off of Wylde Road and a memorial rose garden for cremations has been established. 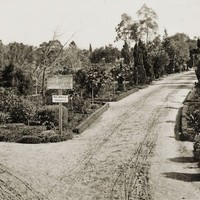 Image courtesy of the State Library of South Australia, SLSA: B9142, Public Domain 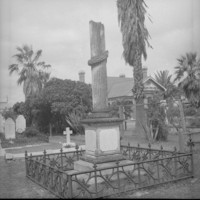 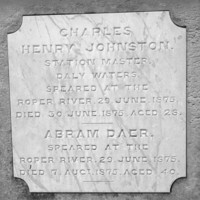 Image courtesy of the State Library of South Australia, PRG 1218/34/827b, Public Domain 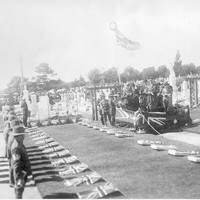 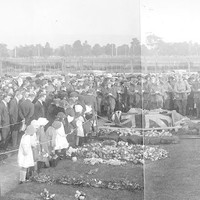 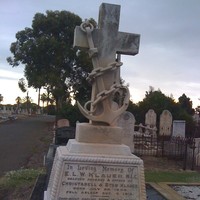 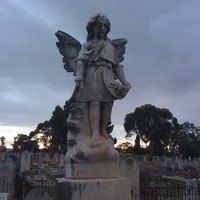