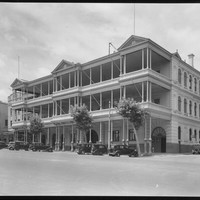 Russian-born Lewy Cotton, a irascible, autocratic head waiter, was unforgettable. Reigning supreme, he refused admittance to any male guest not wearing a tie – regardless of their social status. He retired on New Year’s Eve 1970 after 50 years service to the hotel.
1971

The hotel was closed in 1871 and later demolished in the same year.

This hotel on North Terrace was first licenced as a public house in 1878 and was closed and demolished in 1971. Some felt it was equal in nostalgic significance to Raffles’ Hotel in Singapore, but no one realised the extent of its loss until it vanished beneath the rubble. To many, ‘The South’, the city’s three-storey grand hotel, was Adelaide. During its last great era, from 1934, when Louisa O’Brien was owner and hostess, it was renowned for superb service and cuisine. In traditional grand style, she and her family descended the stairs each evening to take their place in the dining room. Her irascible, autocratic head waiter, the Russian-born Lewy Cotton, was unforgettable. Reigning supreme, he refused admittance to any male guest not wearing a tie – regardless of their social status. He retired on New Year’s Eve 1970 after 50 years service. This was the place for Adelaide’s illustrious guests to stay. Famous among them were Anna Pavlova, H G Wells, Sir Laurence Olivier and his wife, Vivien Leigh, Noel Coward, Katharine Hepburn and The Beatles. 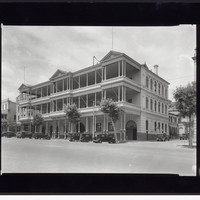 Image courtesy of the State Library of South Australia, SLSA: B 64020, public domain. 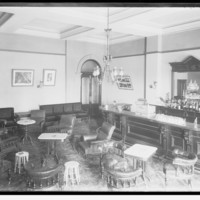 Associated with:
Breweries and beer
Pubs