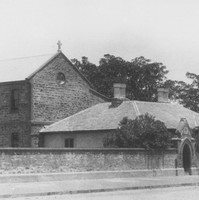 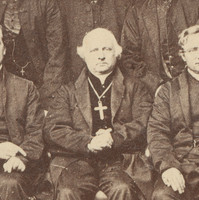 Bishop Sheil with the Catholic clergy of South Australia
1868

The Dominican sisters arrived in Adelaide from Ireland, at the invitation of Bishop Laurence Bonaventure Sheil. They established a religious community and school on Franklin Street.
1868

The foundation for Saint Mary's Convent was laid in 1868, shortly after the arrival of the Dominican sisters.
1869

Saint Mary's Dominican Convent Boarding and Day School was opened on 2 February 1869, two months after the arrival of the first Dominican sisters. 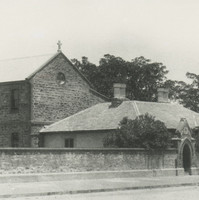 The Dominican sisters moved from their cottages on Franklin Street to the main convent building in 1871. Prior to this, the building was the home of the Sisters of Saint Joseph. 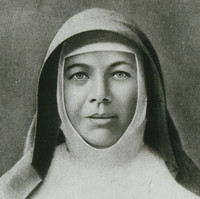 On 22 September 1871, Mary MacKillop was excommunicated for alleged insubordination by Bishop Sheil in the Chapel of Saint Mary's Convent and School.
1996

Restoration of Chapel and Schoolroom

The original chapel and schoolroom buildings designed by Edward Woods were restored in 1996.

Saint Mary's Convent and School one of several Catholic church buildings, school rooms religious community residences in the southwest of Adelaide's CBD. Along with the Archbishop's House on West Terrace, Saint Patrick's Church on Grote Street, and the Sisters of Saint Joseph's schoolrooms and cottages, the convent was closely situated to the large community of Catholics, particularly Irish immigrants, living in the South West corner of Adelaide.

The land on which Saint Mary’s Dominican Convent Boarding and Day School was built was granted to Bishop Francis Murphy by William Leigh, an English landowner who had purchased a number of town lots in Adelaide via his agent, John Morphett.  Leigh, who had converted to Catholicism in 1844, gave Bishop Murphy four acres on which to build a church and additional buildings. The convent was one of a complex of Catholic schools, churches and residences in the South West of Adelaide.

The first community of Dominican Sisters, from Cabra in Ireland, came to Adelaide in 1868 at the invitation of the new bishop of Adelaide, Laurence Bonaventure Sheil. They were assigned with the responsibility of educating middle-class girls, including girls from other religious backgrounds, whose families could afford to pay for secondary schooling. In 1876 the school offered a few free places to poor girls who displayed academic promise. Meanwhile, the Sisters of Saint Joseph of the Sacred Heart, led by Mary Mackillop, would provide primary education to children from poor families, particularly the many Irish Catholics living in the South West.

On arrival in Adelaide, the Dominican sisters lived in cottages in Franklin Street, which have since been demolished. The buildings that formed Saint Mary's convent and school were designed by Edward Woods and constructed between 1868 and 1869. The gothic revival style echoed other school buildings Woods designed, including the Teacher’s Training College at Grote Street and Sturt Street School. The two-storey building that formed Saint Mary’s School was used as a school room for 150 pupils, with a chapel and dormitories for the Sisters on the upper floor. Additional school rooms, a chapel and a boarding house for pupils were completed in 1869.

The foundation stone for Saint Mary’s Dominican Convent Boarding and Day School was laid on 30 December 1868, in a ceremony led by Bishop Sheil, and attended by clergy including the Vicar-General and the seven Dominicans. The school was opened on 2 February 1869. Pupils were taught 'grammar, history, geography, astronomy, the use of the globes, writing and arithmetic; the French, Spanish and Italian languages, and every species of plain and ornamental needlework', with additional fees charged for tuition music, drawing, dancing and singing.

Mary MacKillop and the Sisters of Saint Joseph

By 1870, MacKillop travelled to Queensland to establish a community of Jesphites in Brisbane. In her absence, the Sisters of Saint Joseph were administered by Tennison Woods. Tensions between Tennison Woods and other priests in the diocese began to emerge. As well as complaining about Tennison Woods' administration of Catholic Education and his management of the Sisters of Saint Joseph, he was also criticised for his decision not to accept state funding for the Josephite schools, which placed the financial burden of maintaining the sisters and their schools on the diocese, which was already struggling financially. Under mounting pressure, Tennison Woods resigned from his post and left to work in Bendigo.

When she returned to South Australia in 1871, MacKillop was summoned for a meeting with Bishop Sheil, who voiced complaints about some of the sisters and the living arrangements of members of the order. He ordered that the Sisters of Saint Joseph hand responsibility for the Poor School in Grote Street to the Dominican sisters, who would also be given the convent building on Franklin Street to live in (prior to this, the Dominican sisters lived in the cottages on Franklin Street).

Sheil also commissioned an examination of the lives of the sisters. The commission ended with recommendations that some of the sisters be removed from their teaching roles and made lay sisters, and that each convent submit to the leadership of their local priest. MacKillop disagreed with these changes and wrote a letter to Sheil explaining her position. Following this confrontation, Bishop Sheil excommunicated Mary MacKillop for alleged insubordination at the chapel at Saint Mary's Convent. The Sisters of Saint Joseph were almost completely disbanded and many of their schools were closed. Mary MacKillop's excommunication was lifted in 1872.

Despite the turmoil surrounding Mary MacKillop's excommunication and the death of their superior Mother Teresa Moore, the Dominican sisters remained in Adelaide and continued to teach at Saint Mary's. Other communities were established in Adelaide after the arrival of more sisters from Ireland in 1875. The addition of buildings and facilities in the late 20th century reflected ongoing expansion in the School's enrollments, curriculum and teaching expertise, particularly with the establishment of the Junior School for Reception to Year 7 students. Saint Mary’s College is now the oldest continuously running school for girls in South Australia. 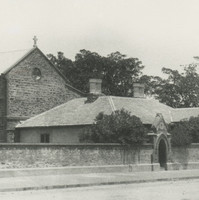 Image courtesy of the State Library of South Australia, SLSA: B 33688. Public Domain. 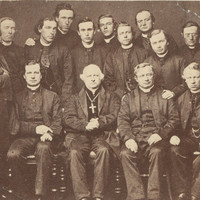 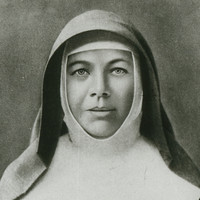 Image courtesy of the State Library of South Australia, SLSA: B23825. Public Domain.

Many thanks, Catherine. I am most grateful and I will make contact with the people you suggest.
regards
Dianne

Hi Dianne,
unfortunately we don't have those details on file, I think the best place to start would be with the Archives and Records Services of the Catholic Archdiocese of Adelaide https://adelaide.catholic.org.au/our-works-and-community/archives-and-re.... I'd also suggest talking to the wonderful team at the Mary MacKillop Museum who have done a lot of research around her work - https://explore.history.sa.gov.au/organisation/mary-mackillop-museum Best of luck with your search!

I've amended for you Dianne.

Edit to above - should read "Sister Wilfred of the Second Sorrowful Mystery" - my sincere apologies.

My great grandmother Mary Ann Hayes was Sister Wilfred of the Second Sorrowful Mystery - who was brought to South Australia from Ireland by Mary McKillop in 1874 on th S.S.St Osyth. She was secularised in 1883. I would love to know where she served during her time as a Sister and particularly from where in Ireland she came.

Kelly, Gabrielle, 'By the Light of the Light of the Cross: Cabra Dominicans in South Australia- Founding Ideals', in Gabrielle Kelly and Kevin Saunders (eds.), Towards the Intelligent Use of Liberty: Dominican Approaches in Education (Adelaide: ATF Press, 2007), pp315-28.