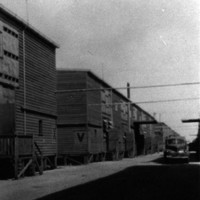 Rosewater migrant hostel closed after only a short time in operation following protests and rent strikes about conditions.
One of the worst migrant hostels in South Australia, Rosewater consisted of converted wool stores partitioned for accommodation. Stories from former residents feature the shock and disappointment at their first sight of Rosewater hostel, and some recall rats and snakes in the buildings.

Rosewater was one of several wool stores around Australia used for migrant accommodation. Nine large buildings were converted, five to sleeping quarters for residents and four as staff quarters, kitchens and messrooms. Laundries were built between existing structures.
The woolsheds were long rectangular wooden buildings, raised over a metre off the ground. Built for storage, they were very tall. Accounts suggest that the floorboards were not well sealed. Various improvements were made after the decision to accommodate British migrants, but the conditions were still basic, with soft board partitions dividing the large buildings into rooms for sleeping.
Buildings converted for accommodation were divided into ‘flats’ of three connected rooms or ‘cubicles’ for single rooms, all accessed off a long central passageway. Partitions did not meet the ceiling Rooms were covered in Seiselcraft (a paper-like material) and wire netting stretched across the top of the partitions. This went some way towards preventing pigeons from getting into individual rooms but did nothing to prevent pigeons, or sound, from travelling through the buildings.
Space was set aside for a crèche and play area after children were moved in, though only after complaints, and there were some concerns about the location of the play area near the incinerator. Interviews with past residents suggest children played on a neighbouring rubbish pile, under the raised buildings, and occasionally in pools of water around the site.
Public transport to the location of the hostel was limited, and there were concerns raised by women living at the site about the dock area of Port Adelaide residents had to walk through in order to catch a bus.

I remember sitting in the little room by the table, and I said, ‘Well, we’re not in Australia, Mum and Dad, until we get out of here!’
Bill Gordon, Rosewater hostel 1950, interviewed 2009

Originally intended to accommodate Displaced Persons from Europe, British migrants were moved to Rosewater by September 1950. There are many reports of complaints, several claiming British migrants were misled by the Australian Government about the sort of accommodation in which they would be housed. Rosewater featured frequently in The Advertiser.
Residents at Rosewater signed a petition protesting against conditions in January 1951, specifically referring to an inspection from a Mr Wheeler, from the Assisted Migration Division, who reported that complaints were exaggerated. Wheeler praised the manager, Mr O’Brien, along with the food and service.
British residents sought legal advice about false representations given by the Commonwealth Government at Australia House in London. The result of meetings on this issue and continued complaints was further investigation and a plan to start transferring migrants from Rosewater to Gepps Cross and Finsbury hostels. The Advertiser reported on 27 January 1951 that ‘intending migrants from Great Britain would in future be told the facts about accommodation and conditions before they left for Australia’.
Later in 1951, Rosewater residents joined the rent strikes, forming a protest committee the following year. Despite ongoing disputes, when it was announced in November 1952 that Rosewater would close there were letters to the editor from residents unhappy about moving when improvements had been made and everything was now ‘satisfactory’.
During the disputes, Rosewater residents were supported by the British Migrants Association. Other organisations active in the hostel took a more social role, such as the Junior Red Cross, which held children’s events. A soccer team also formed at Rosewater, playing in the local competition.
In 1980 former residents Heather McCooke and Edna Simson organised a reunion of former residents. Once again Rosewater made The Advertiser, this time with a positive focus on the new lives British migrants have forged in Australia. 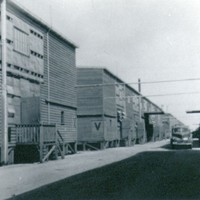 Thanks for sharing those memories Colin.

We also, (Mother, Father and younger sister) came on the Ranchi and through Bathurst. Rosewater was where I as a !2 year old, amassed a huge pile of comic books, I remember the surrounds were dried-up flood plains to look at.
At Bathurst I remember waking up in the morning to the marvelous sound of magpies.

Hi Sylvia, there are more Migrant Hostel photos here: https://www.flickr.com/groups/migranthostels/ Unfortunately there are not many images of Rosewater in our collection, but we will see if I will see if we can add any more to the Media tab of this page.

Hi Maria,
Sincere apologies for the slow reply, I think your message was posted when I was away and no one else picked up the notification. I would love to see your photos. I'll send you an e-mail to talk more.

We were there for Christmas 1950 what a shocking place. We came from Bathurst too. Came over on the Ranchi

Arrived at Rosewater in 1951 after spending a few months at Bathurst in the Blue Mountains. My mother was devastated when she saw where were going to have to live and so were a lot of the other families on the bus when we arrived. My father was one of the migrants who stopped paying rent and they hired a lawyer and took the Commonwealth Hostels to court. If you need any other info I can help you out, just send me an email. Also have some old photos of the outside of the buildings. Regards, Maria.