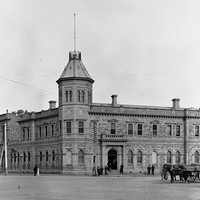 Construction of Port Adelaide’s fourth customs house commenced in 1878, following demolition of the timber customs house established on the same spot in 1840. Initially known as the ‘Government Offices’, it was designed by Colonial Architect George Thomas Light, and built on contract by Messrs. Williams & Cleave at a cost of £11 102. The two-storey building was designed in Victorian Italianate style and constructed from Dry Creek bluestone with Sydney white freestone dressings. Like its immediate predecessor, it was erected atop timber footings embedded in reclaimed land created during the 1860s. On account of its robust construction and 70-foot (21.3-metre) high observation tower, the Government Offices complex was—and continues to be—one of the most prominent public buildings in Port Adelaide.

Originally intended for use of the Mercantile Marine and Marine Board, the Government Offices instead initially accommodated the Marine Board and Customs Department. The Marine Board occupied the building’s first floor, while the customs house comprised the entire ground level. As with the 1860 customs house, the majority of the new structure consisted of a long room where customs business was transacted. In 1885, an improved long room of significantly greater size was constructed on the south side of the building adjacent to the Port Adelaide Institute.

As the amount of shipping entering Port Adelaide steadily increased during the latter half of the nineteenth century, the need arose for expansion of existing customs facilities. Consequently, a ground floor extension was added to the Government Offices building in 1890. It stretched across a former laneway between the customs house and Port Adelaide Institute and physically connected both structures. By the turn-of-the-century, a second level was added to the extension, and in 1901 the Customs Department took possession of the entire Government Offices building.

The Customs Department’s need for additional space continued unabated, however, and by the early 1950s it was renting rooms in the building of its next door neighbour, the Port Adelaide Institute. Following that organisation’s removal to new premises on St. Vincent Street in 1959, the Customs Department purchased and occupied the entirety of the old Institute building. In subsequent years, the interior of the Institute building was remodelled and internal access between it and the customs house created. The Customs Department occupied both structures until 1987, when it moved into a modern office block near the Portland Canal development. Since that time, the Government Offices building has been vacant, and has gradually fallen into disrepair. In May 2013, a 4-kilogram chunk of masonry fell from the building, prompting calls from the Port Adelaide community for its repair and restoration. Repair to the structure’s stonework and painting of its façade commenced in October 2013 as part of a State Government building restoration program. 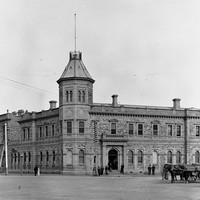 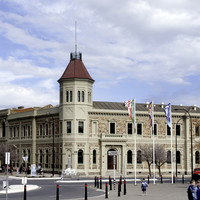 I'm not sure about that Bronwyn, it's one I'd need to do a little digging on, but there is some more information on it here - https://sahistoryhub.history.sa.gov.au/subjects/customs-houses-of-port-a... and James Hunter's sources may provide the answer.

May I ask who built the original custom house in 1840?
I have been advised that it was William Collins, my GGGrandfather.