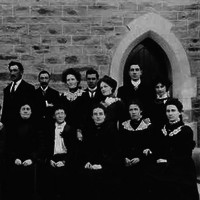 Pirie Street Methodist Church was the ‘cathedral church’ of Methodism in Adelaide. It seated 800 people downstairs and 400 in the galleries. A prominent worshipper was Sir John Langdon Bonython (1848–1939), the proprietor and editor of the Advertisernewspaper and a member of the Australian Parliament from 1901 to 1906. Bonython bequeathed a substantial sum to the church.

In 1969 Pirie Street Methodist Church merged with Flinders Street Stow Memorial Congregational Church, which backed onto it. The merger was an early step towards the creation of the Uniting Church in Australia. The church building was compulsorily acquired by the Adelaide City Council and demolished in 1972 to make way for the Colonel Light Centre. The church’s memorial plaques, stained glass windows, wood panelling from the pulpit and large organ were moved to Stow Church, to where the congregation relocated.

The Pirie Street Methodist Church Meeting Hall, now owned by the Adelaide City Council, is the only surviving remnant of the original church complex. Completed in 1862, it was situated at the southern end of the church. The Gothic style hall of Dry Creek stone with brick dressings and slate roof was designed by prominent Adelaide architect Edmund Wright. The builder was Mr Lines. The hall was used by the church and the Mutual Improvement Association as a school room and meeting hall. The hall is associated with the origins of Prince Alfred College which began in the building in 1869. After the private Wesleyan school moved to Kent Town, the hall was used for a Sunday School: some 400 students were attending by the 1870s.

The manse of Pirie Street Methodist Church was built on its eastern side in 1853 at a cost of £1200. The substantial minister’s residence was Tudor Revival style and less severe than its neighbour. The manse was demolished in 1925 by the Methodist Church to make way for the seven-storey Epworth Building.

The Epworth Building, six floors above and one below ground, was named after John Wesley’s birthplace in Lincolnshire, England. It illustrates the growth and consolidation of Methodism in South Australia. Designed by architects English & Soward in a decorative Gothic style, it still stands out amongst other buildings in the street.

Epworth Building housed the church’s administrative offices and the Methodist Book Depot, later renamed the Epworth Book Depot. The basement was used as a social centre for the church and a tearoom to raise money for missionary work. The church leased a substantial portion of the building as business premises to generate revenue. The building became one of its most lucrative assets. Additional office space was constructed at the rear of Epworth Building in the 1960s. 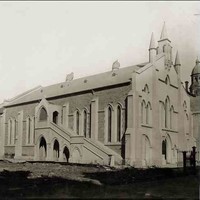 Image courtesy of the State Library of South Australia, SLSA: B2728, Public Domain 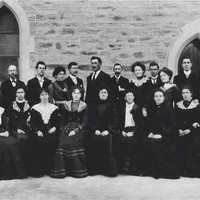 Image courtesy of the State Library of South Australia, SLSA: B32252, Public Domain 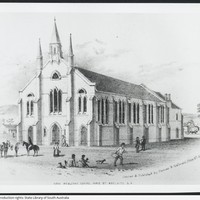 Image courtesy of the State Library of South Australia, SLSA: B34500, No known copyright restrictions