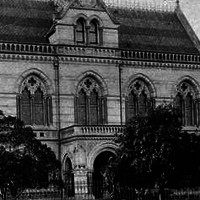 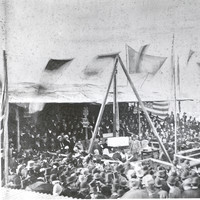 The marble foundation stone of the ‘University Building’ was laid by Governor Sir William Jervois on 30 July 1879. The ceremony was attended by over two thousand people.
1881

The partially completed building was occupied in March 1881. Classes and examinations were held there while building work continued for another year.
1882

University Building was officially opened by Governor Jervois on 5 April 1882. Speaking at the degree ceremony that accompanied the opening, Vice-Chancellor Sir Samuel Way noted that unlike Melbourne and Sydney Universities, the University of Adelaide was able to grant degrees to women and also in science. 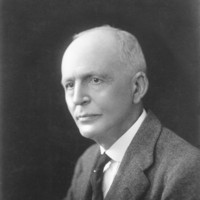 University Building was renamed the Mitchell Building in 1961 in recognition of the centenary of the birth of Sir William Mitchell, the Hughes Professor of Philosophy (and other subjects), who served on the University Council (1896-1948) and was the university's Vice-Chancellor (1916-42) and Chancellor (1942-48).

South Australia’s first university, the University of Adelaide, was established by the colonial legislature in 1874. The government set aside an area of the park lands surrounding Adelaide to accommodate it. But some time elapsed before the university moved to construct premises to house students and staff. In the meantime, classes were held in the Teachers Training School in Grote Street and at other city locations. At the beginning of 1877 the university reserve on North Terrace remained an empty block of land measuring 98m wide and about 195m deep. The western boundary ran along the path between the current Art Gallery and university, and the eastern boundary was along the western edge of what is now Bonython Hall.

In February 1877 the University Council announced South Australian architect James McGeorge as the winner of a competition to design the university's first building. However, his submission proved highly contentious. The council then approached the second prize winner, Michael Egan of Melbourne. Egan completed a design and working drawings but the council decided that it was too costly. William McMinn of Woods & McMinn architects, who acted as advisory architects to the university, was asked to review and amend the design. Despite Egan’s objections, McMinn’s amendments were accepted. He was given credit for the final design, even though it was similar to Egan’s.

The marble foundation stone of the ‘University Building’ was laid by Governor Sir William Jervois on 30 July 1879. Sir Walter Watson Hughes and Sir Thomas Elder, founding benefactors of the university, were two of the 2000 people who attended the ceremony. Parliament adjourned so that members could take part in the event, which was noted in the South Australian Register as being ‘of exceptional importance’. Special provision was made for a photographer and ‘representatives of the Press’ on a platform erected for special guests so that the event could be well reported. An attachment of cavalry escorted the governor and a guard of honour was provided by the Norwood and Hindmarsh Companies of Volunteers. A military band played the National Anthem at the commencement and the 'Song of Australia' at the end. A glass jar containing copies of the day’s Advertiser and Register; a University Calendar for the year, coins of the realm and a parchment with an inscription in Latin was sealed beneath the stone. Speeches by the university's chancellor, the Anglican bishop, the governor and the education minister emphasised the importance of further education for the colony.

The partially completed building was occupied in March 1881. Classes and examinations were held there while building work continued for another year.

University Building was officially opened by Governor Jervois on 5 April 1882. Speaking at the degree ceremony that accompanied the opening, Vice-Chancellor Sir Samuel Way noted that unlike Melbourne and Sydney Universities, the University of Adelaide was able to grant degrees to women and also in science. Enrolments numbered 74 in 1881 and 87 in 1882. Way noted that 'last year we passed the English standard of attendance at University lectures, and that we are rapidly approaching the standard in that respect in Ireland’.

The opening and degree ceremonies were held in the large first floor library, which featured an elaborately panelled and moulded ceiling, and polished shelving and furniture. All rooms had fireplaces with stone mantelpieces. They were lit by gas fittings and some by polished brass chandeliers. On the ground floor the large entrance hall was framed by three ornately carved stone arches. A grand staircase led up to a central landing, then divided into side flights to reach the first floor. Staff offices and teaching spaces were provided in a basement as well as on the ground and upper floors.

The North Terrace façade of the ‘modern Gothic’ building was of pale Sydney stone with darker horizontal bands, while the rest of the exterior walls were of Tea Tree Gully freestone. The entrance porch, with its carved stone ornamentation, stood out from the façade to provide a balcony above. The red stone pillars of the porch and first floor windows were from Dumfries, Scotland. Large wooden double doors led to the interior from the porch. The stone carving of the interior and exterior of the building were sculpted by William James Maxwell (1842-1903) who had migrated to Adelaide from Glasgow, Scotland in 1878. The high-pitched slate roof was decoratively laid in alternating bands and surmounted by decorative iron casting. An ornamental ventilating turret stood up from the roof ridge.

Space in the new building soon proved inadequate to meet demand. By the end of the 1880s the upper floor had been extended to provide for the teaching of law and chemistry. In spite of accommodation pressures, University Building accommodated all teaching in arts, science, law and music, as well as the library and administration to the end of the nineteenth century.

A bequest of £65 000 by Sir Thomas Elder on his death in 1897 enabled the university to more than double is size. Over the next 50 years less and less teaching occurred in University Building: music transferred to Elder Hall in 1900; chemistry, natural sciences and engineering relocated to the Prince of Wales Building (now demolished) in 1902; physics left in 1926; the library transferred to the Barr Smith Library in 1932; and law shifted to its own premises in 1960. By 1960 only university administration was carried out in the building. The building has been modified over time. Alterations included the conversion of the basement room in which Professor William Henry Bragg conducted research into X-Ray crystallography into a storeroom.

University Building was renamed the Mitchell Building in 1961 in recognition of the centenary of the birth of Sir William Mitchell, the Hughes Professor of Philosophy (and other subjects), who served on the University Council (1896-1948) and was the university's Vice-Chancellor (1916-42) and Chancellor (1942-48).

Mitchell Building houses four memorials. Five bronze tablets recording 535 members of the university who served in the First World War (78 of whom were killed) are located on the landing of the main stairway. A stained glass window, ‘Knowledge’, on the upper landing of the rear stairway represents science holding up a lighted torch of knowledge. Designed by Edith Lungley in 1932, the widow of Thorburn Brailsford Robertson donated it in recognition of his professorship of biochemistry and general physiology (1919-39). Two bronze plaques commemorate Sir Henry Ayers (University Treasurer 1874-86) and William Barlow (Registrar 1874-82 and Vice-Chancellor 1896-1915).

The building has been associated with dramatic events, including the occupation of a council meeting by more than 100 students during worldwide student unrest in the late 1960s and the 1970s.

Mitchell Building continues to house the administration and the governing bodies of the university. 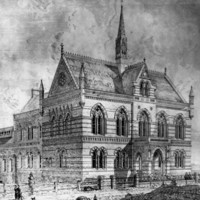 Sketch of the Mitchell Building, 1890. 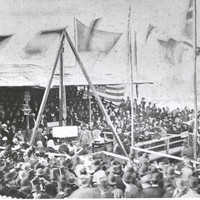 Laying the foundation stone of the Mitchell Building, the first Adelaide University building, 1879. 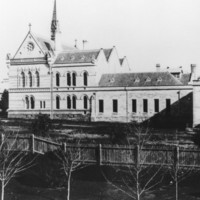 Side view of the Mitchell Building, 1898 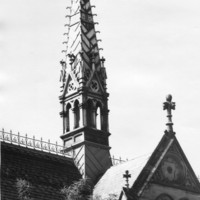 Courtesy of the University of Adelaide Archives, UAA S826, Permission to publish required. 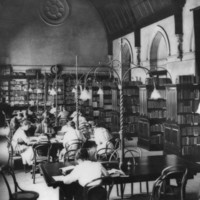 Interior of the Mitchell Building when it was the Adelaide University Library. 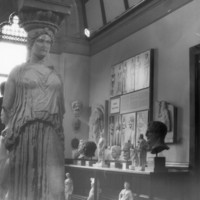 The Classics Museum inside the Mitchell Building. 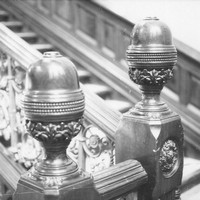 Carving on the staircase of the Mitchell Building. 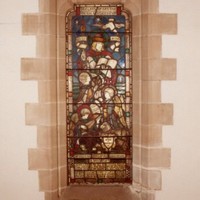 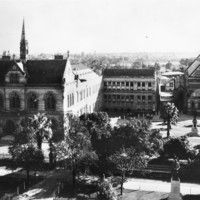 Aerial view of the Mitchell Building and Elder Hall. 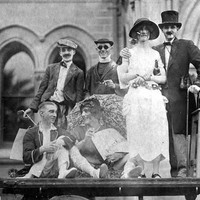 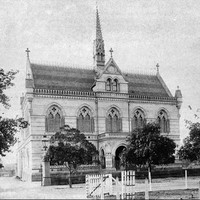 Image courtesy of the State Library of South Australia, SLSA: B 56357, Public Domain 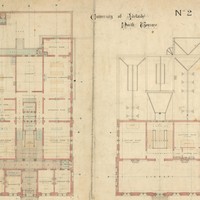 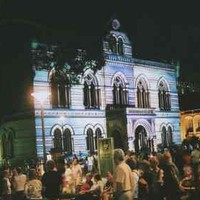 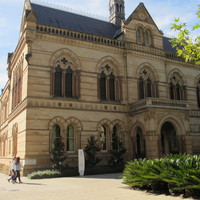 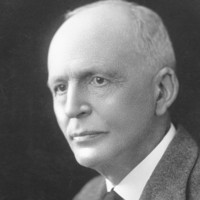