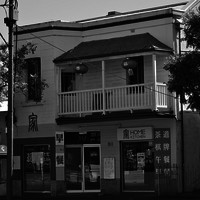 The Hellenic Club is one of several club rooms and social venues established by the Greek community in the West of the city centre. The Club adjoined a delicatessen and barber’s shop, both operated by Greek migrant business owners.

Greek migration to South Australia began in the nineteenth century. Migration from Greece increased in the 1920s and 30s following war and economic depression in Greece. Many of the Greek migrants who came to South Australia worked in the lead smelting industry at Port Pirie, as well as the fishing industry, food trades and retail. In the late 1920s, many of those who lost their jobs at the smelting works in Port Pirie made their way to Adelaide.

Greek social clubs or venues were established at various locations around the Adelaide city centre. Since the Greek community was small and dispersed, there were initially very few formal organisations. The term ‘Greek Club’ was often used broadly to describe venues where Greek community members gathered and socialised rather than a formal group or organisation, and according to one newspaper report in 1935, Adelaide had about 15 such venues. These were often associated with nearby businesses owned and operated by members of the Greek community, such as the Star Grocery on Hindley Street, which was owned by Stavros Cratsis and associated with the Hellas Club.

The growth of Adelaide’s Greek community led to the creation of more formal organisations. The first formal organisation for Greek people was the Omonoia Society, established in 1922. The Hellenic Association was formed in 1923. The Kastellorizian Brotherhood and the Apollo Society followed in 1929. By 1930, the Greek Orthodox Community of South Australia was formally established. Other groups, clubs and organisations sprang up as the Greek community increased in size in the post-war period.

The site of the Hellenic Club on Morphett Street operated as a Greek delicatessen from 1951, and was the site for the Pelepponisos Club. A hair salon operated by H. Paraskevas was also opened on the premises. The Hellenic Club, which welcomed a wider membership of people from other regions of Greece, opened in 1971 and served as a popular venue for members of the Greek community to drink coffee, socialise, play cards and play a dice game known as tavlin. 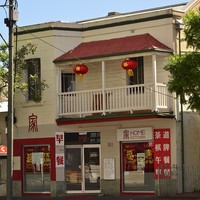 Anagnostou, Penny, ‘Greeks in South Australia’, in James Jupp (ed.) The Australian People: An Encyclopedia of the Nation, Its People and Their Origins (Cambridge: Cambridge University Press, 2001), pp401-4.