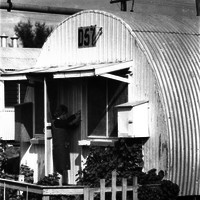 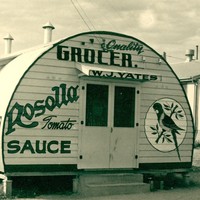 The distinctive rows of Nissen huts at Gepps Cross provided the image that springs to mind for many South Australians at the mention of migrant hostels. Gepps Cross featured frequently in the press and government promotional material, and is still remembered by many today.

At the time it operated, Gepps Cross hostel was called a 'miniature suburb'. It was ‘purpose built’ using Nissen huts, with some Quonsett huts and other buildings. The hostel was built in two stages, with a third planned stage never built. Each Nissen hut was divided into two self-contained four room flats. Staff had separate accommodation. There were communal toilets, showers, laundry and dining facilities. The kitchens were designed to feed large numbers and built with the latest appliances, including steam-heated soup cookers, pressure cookers, electric mixers, gas ovens and a heated servery. There were crèche facilities, kindergartens, a grocery shop, post office and banking facilities. There was a large recreation hall and on site hospital wards. Gepps Cross was held up as a model hostel with modern facilities and was described in The Advertiser as a 'luxury camp'. Despite this, there were complaints, and Gepps Cross residents joined Finsbury migrants in the rent strikes of 1952. Following this, and the transfer of administration to the state government, there were meetings to discuss installing kitchenettes in the Nissen huts. Residents voted overwhelmingly for the kitchenettes and installation soon began, with the first opening in 1953. Disputes over extra charges, however, continued until 1954. Nothing from the Gepps Cross hostel remains on the site.

Gepps Cross residents were predominantly British, although former residents report people from a diverse range of cultures living at the hostel. In the first year a number of British migrants were transferred from Rosewater, Finsbury and Smithfield, many in response to complaints about accommodation at those sites. By the end of 1951 Gepps Cross was recorded as having a capacity of 1,200 people.

Gepps Cross residents were part of an active, social community. As well as dances and films there were jumble sales, excursions, sporting events with hostel teams competing regularly in local competitions, and celebrations for special occasions such as Christmas and Guy Fawkes night. Residents formed a social committee which published newsletters for hostel residents, keeping them up to date with activities and changes in staff. There were many famous visitors during the life of the hostel, including Prime Minister Menzies and Governor Norrie. Many former residents remember the day Queen Elizabeth passed by the hostel.  When plans began in 1963 to close the hostel it was estimated that 2,000 families had passed through Gepps Cross. A group of former residents recorded their stories in the 2006 book Tin Huts and Memories. 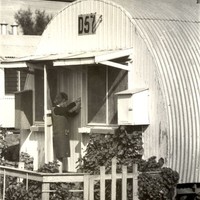 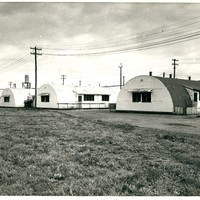 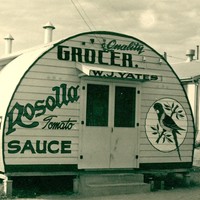 The Grocery Store at Gepps Cross painted with advertising, 1952. 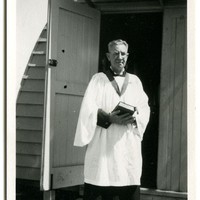 Hi Helen,
I don't think I've personally come across Christina, but if you're looking for historical records you might be able to find her in the collections at the National Archives of Australia - https://www.naa.gov.au/

Hi Ron,
Gepps Cross was run by Commonwealth Hostels Limited, which means most of the government records related to it can be found in the National Archives of Australia. Have you already tried searching there for records relating to your mother's time at Gepps Cross? If not you might like to see what you can turn up - https://recordsearch.naa.gov.au/SearchNRetrieve/Interface/SearchScreens/...

I lived there around 1961 to1964 . My mothers name was Valma Loraine Chappell nee Kirkbright if anyone knows the name or remembers her I would love to hear from you

Thanks for sharing your memories Carol.

Ouch Paul, what a painful memory!

My parents and my two brothers lived at gepps cross migrant camp in the mid 1950’s I remember me wandering from my parents hut and a push bike race was happening I was three years old and I wandered into the track when the race was going and one of the bike racers rode into me and the front mud guard on his bike hit my left arm and the guard tore my arm all the way till my elbow I run back to my parents hut screaming and my father put a package of cotton wool on my arm and I was taken to hospital and the cotton wool had dried to my servere wound and at the hospital they had to pull all the dried cotton wool of my arm before they could operate on my arm , they used no pain killers doing this and I remember the pain still. I’m now sixty three years of age

Thanks for sharing your memories Linda, and sorry to hear you had such a terrible experience.

We landed at Gepps Cross Hostel from Finsbury Hostel after my family came from England. It was a dreadful place I would not put my dog in a Nissan hut-no heating and no cooling. Dad bought me a budgie and it died of the heat. Coming from England in Nov (cold weather in the UK) how my parents must have suffered with Adelaide heat and the temps in the Nissan hut must have been in the 50'sc-it was like living in an oven. It was far from the paradise they were offered in the brochures. Hellish conditions not fit for kennels even. We were only moved 3 years later when Mum got ill, then to not much better in a Housing Trust duplex in Salisbury North. Putting migrants into sub-standard housing was not the way to endear them to Australia. It would not be tolerated nowadays.

We were there from around 1958-1960. I think we stayed for about 18months, and I started school at Northfield Primary School from Gepps Cross. I can only remember snippets as I was so young, but I do remember that we felt very safe and comfortable in a our near new Nissan Hut home. As kids we had great fun. Not sure my Mum was very happy there.
We moved from Gepps Cross Camp into a house at Clearview where we lived until I married.

Still have my copy John.

The best selling book on the history of Gepps Cross Hostel and the migrant experience in Australia ('Tin Huts & Memories'), is now on a two disc set...suitable for playing on a computer or a T.V. set. It also contains two hours of interviews with former migrants. It's available for $25 (post free to anywhere in Australia). For a preview of what it's all about, try this link: http://radioadelaide.org.au/tags/service-voices/ For further details email: ruglen@tpg.com.au or 0882631215

Thanks for sharing your memories Al, it was certainly a significant part of South Australian history.

My mother worked, as was stated earlier, that wasn't the norm in the early sixties. Again, it was a great place to be a child in. However, there was a certain cachet in being a Gepps Cross migrant camp kid at Northfield school. Prejudice wasn't exactly unknown, shall I say. Stll, I enjoyed my time there, even if my parents found it a real ordeal.

Thanks for sharing Heather. It's interesting to compare the memories of people who were children and adults in the hostels, quite often very different experiences I think!

We thought it was great to have our own "home" in 1958-64 D27B - four rooms including kitchen, a tiny front garden but shared toilet/bathroom and laundry facilities with 8 other families. Two years later my mum became Supervisor of the Child Care Centre on the Hostel so we moved to E Staff Flat - a fence off small house (still Nissan hut) but with 3 bedrooms, own laundry/bathroom etc and a large garden and garage.... real luxury Because of this we stayed 6 years on the hostel. As Michael said above we had great childhood memories. Freedom to ride on our bikes, a pet magpie,walking to Northfield Primary School, Guy Fawkes night bonfires. My brother and friends used to go to the adjoining sheep sale yards and claim they wrestled huge sheep to get the ear tags off... later I found out they picked them up from the ground. My dad and friends started the Gepps Cross Boys Club and a couple of years later mum and friends started Gepps Cross Girls Club. An athletics track was built and the Club was one of the strongest athletics clubs in Adelaide. We did gymnastics - girls did club swinging and appeared on TV a few times. It was a small village atmosphere. Most migrant dads and mums worked (not so many Aussie mums worked) so we kids had help out in the home a lot. We may not have had spare money or lots of clothes or toys but they were happy carefree days .... for us kids anyway.

Great to hear from you Michael, from all I have read conditions were difficult, but things improved over time and Gepps Cross was better than some! Glad you have some good memories.

I was there as a member of a Scottish Migrant family from (best guess0,,1954-57. Although conditions were harsh (so I'm told) I have great childhood memories of my time there.