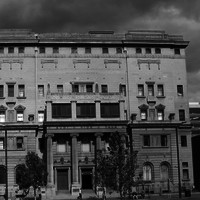 While a South Australian Freemasons lodge formed even before the colony was settled, and a Grand lodge was formed in 1884, it was not until much later that the building that houses today's Grand Lodge was constructed. The land on which the Masonic Centre stands was purchased in 1922 for £10,640. The architects were John Quinton Bruce and William H. Harral, a Freemason, who personally oversaw the work. The Grand Master officiated at the ceremony of laying the Foundation Stone on 15 April 1925. The three lodge rooms on the third and fourth floors were dedicated in April 1927, and the final payment for the building was made in February 1928. The total cost of the land, buildings and furnishings was £116,318/11/6. Originally the building was intended to be constructed from cut stone and granite, but due to costs reinforced concrete was used for much of the site.

The main entrance on North Terrace is flanked by four columns. Above the entrance are the Latin words 'Audi Vide Tace' from the Latin proverb 'Audi, Vide, Tace, si vis vivere in pace' (Hear, see, be silent, if you would live in peace). This saying was the motto of the Grand Lodge until the 1950s. 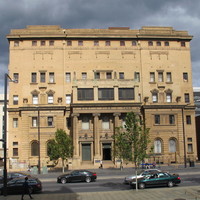 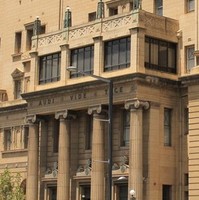