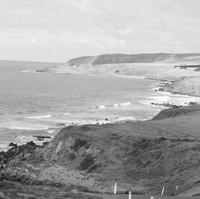 Located south of Adelaide, the Fleurieu Peninsula stretches down the coast to Cape Jervis, across the southern Mount Lofty Ranges and around part of Lake Alexandrina. This diverse region of natural vegetation, fertile farming lands and urban coastal fringe is bordered by Gulf St Vincent, the Southern Ocean and Lake Alexandrina. A Mediterranean climate of cool wet winters and hot dry summers has made the region popular for settlement, farming, tourism and recreation.

The Fleurieu region contains two of the world’s largest glacial exposures, at Hallett Cove and Selwyn’s Glacier Rock, Inman Valley, each of which is at least 500 million years old. Fossils of extinct megafauna have also been found. The Kaurna and Ngarrindjeri once shared trade and social links over the region as their Dreaming stories of Ngurunderi (Ngarrindjeri) and Tjilbruke (Kaurna) outline. Cultural reminders remain in place names such as Onkaparinga, Moana and Yankalilla.

In the later eighteenth century the area was visited by European and American smugglers, whalers and sealers, and in 1802 Matthew Flinders in the Investigator and Nicolas Baudin in La Géographe met in what Flinders named Encounter Bay, site of the later Victor Harbor. Flinders charted the coastline, naming Cape Jervis and other points. Baudin called the peninsula ‘Fleurieu’ in honour of the French navigator and minister of marine, Charles, Count of Fleurieu, but this name was not formally adopted until 1913. Overland expeditions commenced in the 1830s, with Charles Sturt exploring the River Murray and the Lakes areas, and Collet Barker exploring the eastern coast of Gulf St Vincent to Encounter Bay and the Murray Mouth.

William Light, accompanied by assistant surveyor Boyle Travers Finniss and Dr John Woodforde, stepped ashore on 8 September 1836 at Rapid Bay, at the toe of the Fleurieu Peninsula. In 1837 Governor John Hindmarsh proposed Encounter Bay as the site for the colonial capital. However, there being no safe harbour, the idea and the man were soon dismissed.

Prior to the completion of the country surveys in 1839, Encounter Bay was one of the most important settlements, thanks to its whaling stations. These employed, among others, approximately 12 Ngarrindjeri people full time with some 150 working in a peripheral capacity, boiling down blubber, collecting bones and fetching water. In 1840 the Lutheran pastor HAE Meyer established a school in the area to assist the assimilation of Aboriginal people into colonial society, but after smallpox and venereal disease decimated pupil numbers the school closed in 1846.

The first commercial vineyard in the colony was planted by John Reynell in 1838 at Reynella. Today, despite encroaching suburbanisation, McLaren Vale is home to the prime Southern Vales wine area. Early farming on the Fleurieu produced wheat, potatoes and sheep, commodities later much in demand on the Victorian goldfields. Spirits, distilled from potatoes and spring water, were shipped from Myponga Beach (1841) mainly to Victoria, while Willunga slate went from Aldinga and Port Willunga to Melbourne and overseas markets. The inland port of Goolwa catered for the River Murray trade, goods being carried from here to the coastal ports or overland to Port Adelaide for shipment to other colonies and further afield.

In 1854 the first public iron railway in Australia was opened, linking Port Elliot to Goolwa, while the colony’s first reticulated water supply serviced both ocean port and railway. The railway line, extended to Port Victor in 1861 and Strathalbyn in 1869, ceased commercial operation in 1980, but then became the longest volunteer-manned tourist railway in the world. The colony’s first viaduct was constructed at Currency Creek with materials shipped from England. Because frequent storms from the Southern Ocean lashed the coast and made anchorage difficult, a breakwater with a 630m causeway was built off Granite Island in Encounter Bay in 1882.

Mining commenced in 1844 with hand-picked silver–lead–copper ore at Rapid Bay, and by the 1860s many mines were being worked along the coast from Rapid Bay to Sellicks Hill. Gold and arsenic were also mined at Fishery Beach, uranium was extracted in the 1950s at Myponga and sand mining continues today.

Urban development expanded southwards, necessitating reservoirs: Happy Valley, Adelaide’s third reservoir, was completed in 1897, Mount Bold Reservoir was opened in 1938 and its size doubled in 1962, the same year that Myponga Reservoir was opened. Barrages over the Murray, affording water for irrigation as well as potable water for Adelaide, were completed in 1940; a new regional shopping complex at Noarlunga Centre dates from 1976 and the Southern Expressway was opened in December 1997. The Port Stanvac oil refinery, with its deep tanker berth, was the only major port in the region but since its closure the site has been converted to a major water desalination plant to supplement Adelaide’s water supply in adverse conditions.

The Fleurieu Peninsula has always attracted summer visitors, and its popular coastal/lake fringe areas remain much sought after for holiday and retirement accommodation. Tourist experiences include Goolwa’s Signal Point River Murray Interpretive Centre and Granite Island’s penguins and horse-drawn tram. The region also includes the final stages of the 1200km Heysen Trail and holds many festivals including Australia’s only cow race, the Compass Cup. Olives have become a major crop in recent decades, while plantations of almonds have been flattened to make way for housing and grape vines. The most politically divisive issue has been that of the Hindmarsh Island (Kumarangk) Bridge development, which focused attention on Ngarrindjeri survivors and divisions within and between white and black communities.

The region is the gateway to Kangaroo Island, the Coorong, the Murray Region and the Adelaide Hills. While creeping suburbanisation is altering the rural character of the region, for the present the Fleurieu Peninsula remains a unique example of the state’s social, cultural and economic history.

This is a revised version of an entry first published in The Wakefield companion to South Australian history, edited by Wilfrid Prest, Kerrie Round and Carol Fort (Adelaide: Wakefield Press, 2001). Revised by Bernard O’Neil. Edited lightly. Uploaded 7 April 2014. 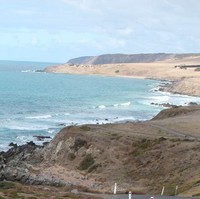 Bell, D, Ngarrindjeri Wurruwarrin: a world that is, was and will be (Melbourne: Spinifex Press, 1998)

Gibbs, RM, A history of South Australia: from colonial days to the present (Adelaide: Southern Heritage, 1999)