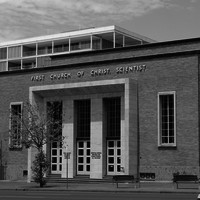 The First Church of Christ, Scientist literally stands on Congregational foundations. Apart from the fact that the denomination’s founder, Mary Baker Eddy, was born into a Congregational family, the current building is sited on what was originally intended to be a new church for the Independents worshipping in Hindmarsh Square. Building work was stopped due to a legal challenge. The unfinished building remained derelict for some years before the First Church of Christ, Scientist, which had been occupying premises in Wakefield Street, Adelaide purchased it in 1939. It was 1953 before they were able to begin building a structure far less expensive than the original design.

The building cost £75 000 and was designed by Louis Laybourne Smith to hold 360 people with a Sunday school in the basement capable of holding 300. A marble porch and a 21.3m long foyer formed an impressive entrance to the new church. A reading room had a separate entrance from Tavistock Street (later renamed Frome Road). 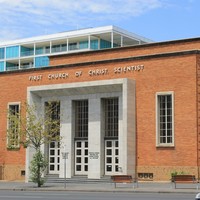 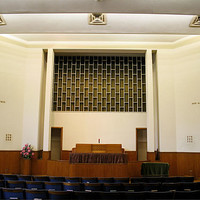 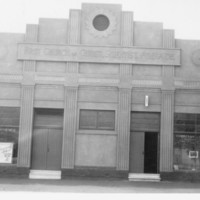