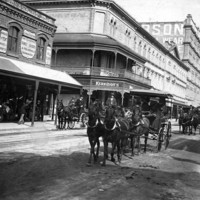 Constructed from east to west in January 1880, Adelaide’s most distinctive commercial complex of14 shops and hotel, heading west along Rundle Street, was built for The South Australian Company. They were designed by William McMinn who was architect of the Governor’s former summer residence, Marble Hill.

It was known first as Cohen’s Family Hotel and became the Austral in 1898. McMinn’s original design was later modified by adding a tiered balcony/veranda with detailed ironwork. The terraced shops were completed in about 1883. The section of shops occupied at the turn of the century by Malcolm Reid & Co. was altered at shop front level and at the rear in 1909. The Austral Hotel was a well-known place for illegal betting in the 1950s.

The basis for this information was first published in the East End Cultural and Historical Walk pamphlet. It is reproduced here courtesy of the East End Coordination Group. 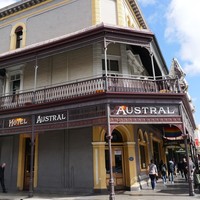 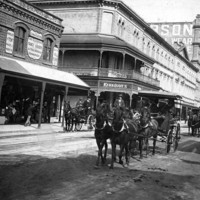