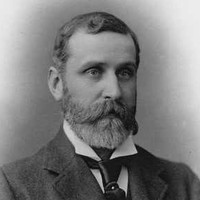 William Antsey Giles was born in Adelaide, South Australia. He was one of 78 grandchildren of William Giles, who served as the Manager of the South Australian Company from 1841 until 1861 and was a prominent Parliamentarian and magistrate.
1878 - 1884

After graduating from the Clifton School in Bristol, England, Giles commenced his medical studies at the University of Edinburgh. He spent two additional years as a post-graduate student in Vienna studying diseases of the eye, ear, nose and throat.
1885

Giles returned to Adelaide, and was subsequently registered by the State's Medical Board. His return coincided with the establishment of the Adelaide Medical School.
1886

The University of Adelaide appointed Giles a Lecturer of Otology. He was made a Lecturer in Clinical Surgery in 1892.
1888

Giles initially restricted his medical practice to diseases of the eye, ear, nose and throat, but extended his activity into general surgery. He was appointed Honorary Assistant Surgeon (1888-1890), Honorary Surgeon (1891-1908) and Honorary Surgeon to the Ear Department (1891-1896) at the Adelaide Hospital.
1892

Following his retirement from medical practice, Giles played golf daily and was a foundation member and life member of the Royal Adelaide Golf Club.
1927

Giles was appointed a foundation Fellow of the Royal Australasian College of Surgeons, and was the first Chairman of the College's South Australian section.
1944

William Anstey Giles came from pioneering stock. He was born in Adelaide on 29th June 1860, one of the 78 grandchildren of William Giles, who had arrived in the province in 1837, succeeded David McLaren as Manager of the South Australian Company, managed the company for twenty years, and was a Member of Parliament, a magistrate and an active churchman. William Anstey’s father was a public figure and prominent grazier, and his mother Mary was the daughter of Captain W. L. O’Halloran, Auditor-General of South Australia.

Anstey Giles’ parents sent him to England for his education at Clifton School in Bristol. In 1878 he began his studies in medicine at the University of Edinburgh, graduating in 1882. He captained the university cricket team and once played for an Australian eleven against the gentlemen of Scotland.

After graduation Anstey Giles spent two post-graduate years studying diseases of the eye, ear, nose and throat in Vienna where one of his teachers was Dr. Politzer, regarded as the father of modern otology (the study of the ear). He returned in 1885 to Adelaide, where on 3rd June  he was registered by the Medical Board as No. 369. His return coincided with the foundation of the Adelaide Medical School.

Giles initially restricted his practice to diseases of the ear, nose and throat, and in 1886 the University of Adelaide appointed him Lecturer in Otology. He extended his activity into general surgery, in association with Dr. William Gardner, and was appointed Honorary Assistant Surgeon (1888-1890), then Honorary Surgeon (1891-1908), to the Adelaide Hospital. He was also Lecturer in Clinical Surgery (1892) and Honorary Surgeon to the ear department (1891-1896).

Sir Henry Newland, who was his dresser in 1894, wrote that Giles loved a good horse, but with the advent of the internal combustion engine he switched from a buggy to a little 6 h.p. de Dion motor car, which Newland later owned. On one occasion, it is said, Giles succeeded in running over the same person three times --- first on a forward run, then by backing over him as he lay on the ground, and then running over him as he recovered. Sir Henry Newland added that, owing to its light weight, the little car was not very lethal and apparently the man was no worse for the episode.

Anstey Giles was prominent in medical administration. He was Dean of the Faculty of Medicine at the University of Adelaide (1895, 1902-1904) and secretary to the Medical Board (1890-96). He was a member of the Adelaide Hospital board of management, which the government dismissed in 1896 during the ‘Hospital Row’ and actively participated in that affair. He was a foundation Fellow of the Royal Australasian College of Surgeons, established in 1927, and the first Chairman of the South Australian section. Giles contributed frequently to medical literature on a wide range of topics, including diseases of the knee joint, parital laryngectomy, laminectomy for fractured spine, enlarged prostate, congenital pyloric stenosis, carcinoma of the siginoid colon, and neurectomy for spasmodic torticollis.

He retired from practice in 1920, played golf daily and was a foundation member and life member of the Royal Adelaide Golf Club. Giles was a man of fine physique, quick to flare up and equally quick to forget. He was remembered as a kind man who loved to entertain, especially in the Adelaide Club.

Anstey Giles married Rita Jones and their only child died, aged two days, in 1892. Rita died in 1907 and Anstey Giles died on 7th May 1944. He was buried with his mother at North Road Cemetery. At the instigation of the South Australian State Committee of the Royal Australasian College of Surgeons, an annual Anstey Giles Lecture was established in 1953. 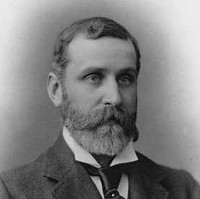 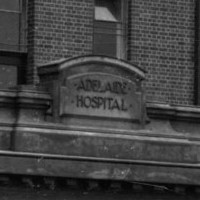 The entrance to Adelaide Hospital, 25 June 1935. William Antsey Giles served on the hospital's management board in the 1890s