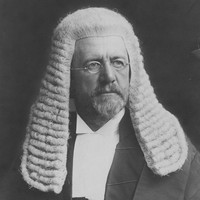 Samuel James Way was born in Portsmouth, Hampshire, England, on 11th April 1836, the son of a poor Bible Christian preacher, James Way, and his wife Jane (née Willis). He was educated in Devon and Kent and in 1853 joined his family in Adelaide, whence they had emigrated three years before. In 1856 he was articled to Alfred Aktinson, who was declared insane just before Way’s admission to practice in 1861 and died soon afterwards --- the first of four deaths that abetted great natural abilities to catapult Way to the top of colonial society. Way rebuilt the firm with James Brook until the latter’s untimely death in 1872 left Way with a strong practice all his own.

He had taken silk in 1871 and was soon earning over £6,000 a year. In 1875 he was elected to the House of Assembly as the member for Sturt. Barely four months later he was Attorney-General in the Boucaut Ministry and, nine months on, exercised the Attorney’s prerogative of appointing himself to the Chief Justiceship, left vacant by Sir Richard Hanson’s demise. He took his seat on the bench of the Supreme Court on 27th March 1876 and dominated it for almost forty years.

Indeed, after 1876 Way came to dominate almost every important cultural, educational, artistic, scientific and charitable body in the colony and sat several times as a Royal Commissioner. Already Vice-Chancellor of the University of Adelaide, Way succeeded Chancellor Short when he died in 1883. As Chief Justice, he was the obvious choice as Acting Governor, serving in that role so often that in 1890 he was made Lieutenant-Governor for life, placing him next after the Governor in colonial precedence. In 1896 he was made a Privy Councillor, with imperial status next after the royal family, and during 1897 sat as Australia’s only representative on the Judicial Committee of the Privy Council. No wonder local wags dubbed him a ‘Pooh-Bah’. Meanwhile, he turned down at least four offers of knighthood, holding out for an hereditary honour, perhaps a peerage, though he had no lawful heirs. On 11th April 1898, his 62nd birthday, he married the 44-year-old widow, Katherine Blue (née Gordon) and the following year accepted a baronetcy ‘to please Mrs. Way’.

Polished, cultured and proud, Way was a jumble of aspirations and contradictions. Wearing judicial robes at University events covered his lack of a degree and he appears this way in the bronze statue that stands in front of the University of Adelaide. His residence ‘Montefiore’ at North Adelaide, set in an exotic if miniature garden, was a monument to his hospitality, bibliophilia and the arts and crafts movement. He also had two country properties for relaxation, income and scientific experiment.

Way knew both joy and regret. Behind the glory lurked the secret life of a devoted family man --- with a difference. From about 1868 Way passed his summers in Tasmania with former chambermaid Susannah Gooding (1842-88). He was the father of at least five of her six children, all named after his parents, siblings and associates, and each christened with his own surname. He set the family up at good addresses in Hobart and then in Melbourne. When he presented his commission as Chief Justice in Adelaide, he adjourned the court for a fortnight to attend the christening of his fifth child in Hobart. Susannah’s death provoked a breakdown in Way, explained as being due to pressure of work, and he undertook a world tour for a year.

Way supported Federation but not a High Court unless he could be its Chief Justice. When he failed to achieve this, his star began to fall. After 1907 he was occasionally appealed against and once over-ruled by his own Full Court. In 1914 he had his left arm amputated in Sydney, due to cancer, but he nevertheless succumbed on 8th January 1916. A State funeral was held three days later and he was buried at West Terrace Cemetery, Adelaide. 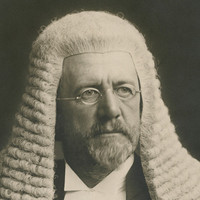 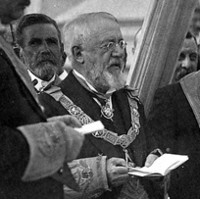 Samuel Way married my great-aunt, Lady Katherine Way. She was otherwise known as Kitty Gollan Blue, nee Gordon, who was the sister of my great-grandfather.
I have collected a great deal of information about Samuel's life - about his fascinating personal life and family history rather than his impressive public life. I have started a website and I am collaborating with others so it would be great if others would join in, especially any descendants.
Thus I was excited to see the note on the SA History Hub two years ago from Lorin. She said that Sir Samuel James Way is her 4xgreat grandfather. Lorin said that she is wanting to make contact with Samuel's descendants.
Would it be possible for you to pass this message on to Lorin, who can then contact me through the website, www.samuelway.info

That's fantastic Don, we can add your website to the Links section of the page too.

My great-great-grandfather, John Carter, was granted his practicing certificate as a barrister and solicitor in the Supreme Court of SA by Sir Charles Cooper before joining the practice of Alfred Atkinson in the mid 1850s. He was the conveyancy manager when the young James Way entered the firm as articled clerk to Atkinson. Following two court cases found against Carter for assault, Atkinson advised in the press that John Carter was no longer practicing in the firm. John Carter then established his own practice at 47 King William St, a short distance down the street. (this building was demolished to build the ornate structure later to house the Birth Deaths and Marriages).

John Carter wound up his affairs and returned to England in 1859, leaving his son John (my great-grandfather in SA). He returned to Australia (Queensland) where he took up a land grant in 1873. He died in Brisbane in 1894 leaving his estate to grandsons and to Sir Samuel Way, Chief Justice of SA, for "services rendered in time of need".

The above story is the subject of personal research for a book. If there are resources that should be consulted, please let me know.

That's an amazing story John,
We'd love to hear more of your family history when you've finished researching. The sources for any of the articles on this website can all be found at the bottom of the articles under the 'sources' tab. They in turn should point to other source of information. Best of luck with your research!

That's quite some family history Lorin.

Parkinson, A., ‘The regret of Sir Samuel Way’, Australian Journal of Legal History, 1995.