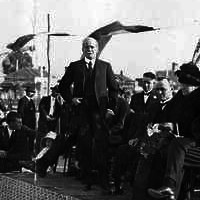 Staunch capitalist George Brookman was born in Glasgow, Scotland, on 15th April 1850, the son of printer Benjamin Brookman and his wife Jane (née Wilson). He emigrated with his family in 1852 and was educated at private schools in Adelaide. He then entered the grocery trade, in which he worked for many years, first for D. & J. Fowler Limited and then in partnership with William Finlayson in a large business in King William Street.

From the days of the Burra Burra mine in the 1840s, Adelaide’s commercial men had been mining speculators. In the 1880s depressed times in South Australia and the marvels of the Broken Hill boom turned them again towards speculation and syndicates. Brookman invested in Charters Towers gold mining and in 1890 bought a seat in the Stock Exchange of Adelaide, in which mining shares were the familiar currency. Paddy Hannan’s find of gold beyond Coolgardie in 1893 spurred a Brookman syndicate, the Adelaide Prospecting Party, to dispatch George’s brother William and the prospector Samuel Pearce to Western Australia. At Hannan’s Find they pegged leases over ironstone outcrops. What was derided as ‘Brookman’s sheep-run’ proved to have gold which, ‘living at depth’, became the heart of Kalgoorlie’s Golden Mile. The resulting mines were hungry for capital, which Brookman and his associates battled to secure in Adelaide, Melbourne and London. Adelaide enjoyed many fruits from the golden west, and Brookman’s mining interests enriched him.

Brookman sold his Stock Exchange seat in 1896 and from 1900 his involvement in mining was less direct. His wealth was reflected in his Gilberton mansion ‘Ivanhoe’, his substantial Brookman Buildings in Grenfell Street and his gift of £15,000 to help found the South Australian School of Mines and Industries. He reconstructed the company which became the Adelaide Electric Supply Co., with himself as Chairman. He was also a Director of the Bank of Adelaide and a council member of the University of Adelaide. He supported patriotic causes, contributing to the Bushmen’s Contingent for South Africa and to First World War efforts. Observing the principle of quiet philanthropy common among Adelaide’s wealthy Scots, Brookman also donated to the Adelaide and the Children’s Hospitals and the Red Cross. Himself an art collector, he assisted the Art Gallery of South Australia and gave the outstanding Morris & Co. stained-glass window for the Stock Exchange building.

Brookman served several terms on the Walkerville Council, thrice as Chairman. As a Legislative Councillor from 1901 to 1910, he revealed an essential conservatism and a suspicion of ‘socialistic legislation’. He favoured restricted public spending, including that for education --- ‘No child should go to school before it was seven’. He saw progress in practical terms, such as the electrification of the tramways and railways, but preferred private rather than public initiatives. Certain public works, such as developing Outer Harbour and, above all, the better conserving of water, especially for irrigation from the River Murray, were among his consistent themes.

Brookman, appointed K.B.E. in 1920, was praised for his war and repatriation services, including his roles as part-originator of the Soldiers’ Fund and chairman of the Repatriation Board. He had married Eliza Martha Marshall in Melbourne on 13th February 1878 and she, with their daughter and two sons, survived him at his death on 20th June 1927. He was buried at North Road Cemetery.

Alert and courteous, but of a quiet disposition, Brookman earned much respect for being public-spirited. He never lost his concern for material progress and his belief in the rewards to be had from personal industry. His mining achievements were his greatest legacy. Through application and shrewdness he had mastered the company promoter’s art, so that the benefits of the Golden Mile flowed to him and many others. All this required hard work and a certain hardness of spirit. ‘Hard but fair’ was the judgement of him by one of his own descendants 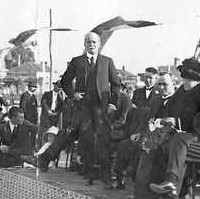 Sir George Brookman (standing) addresses spectators at the opening of a children’s playground in Walkerville, 17 June 1922 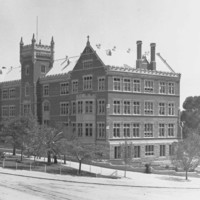 South Australian School of Mines and Industries, 1903. The building was named for benefactor Sir George Brookman 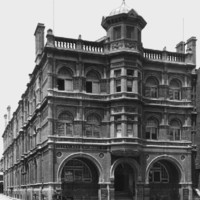 Image courtesy of the State Library of South Australia: SLSA B 2983. Public domain

Name given to:
Brookman Building