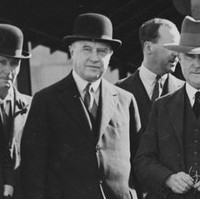 Edward Wheewall Holden was born on 14th August 1885 at College Town, South Australia, the son of saddler and carriage builder Henry Holden and his wife Mary Ann (née Wheewall). He was educated at Prince Alfred College and the University of Adelaide, where he graduated with a B.Sc. in 1905. He then joined the family business, Holden and Frost, and on 18th March 1908 married Hilda May Lavis. They had three children, Margaret, Nancy (who, in 1955, as Nancy Buttfield, became South Australia’s first woman to enter the Australian Parliament) and John.

Edward Holden was eager to diversify the family business and, in a shed at the rear of the firm’s premises in Grenfell Street, extended the operations to include the repairing and maintaining of motor cars imported into the state. Before long, Holden and Frost were building sidecars for motor cycles. From 1917, when the government restricted the import-ation of complete cars into Australia, the firm custom-built car bodies.

Henry and Edward Holden formed a new company, Holden’s Motor Body Builders, in 1919 and established workshops at 400 King William Street. As managing director, Edward Holden forged links with General Motors Corporation (U.S.A.) in 1923 when he visited its headquarters as part of an overseas tour to study vehicle production methods. The signing of an agreement between General Motors and Holden’s on 10th December of that year for the manufacture of car bodies at Holden’s new Woodville plant laid the foundation for what ultimately became one of Australia’s largest secondary industries. Edward Holden introduced automated mass production methods to the company and output rose spectacularly. The business experienced difficulties during the Depression and in March 1931 Holden’s Motor Body Builders merged with General Motors (Aust.). Holden was appointed Managing Director and Executive Chairman of Directors of the new public company, General Motors-Holden’s. He was replaced as Managing Director in 1934 but remained Chairman for the rest of his life.

He served for three years as a councillor and alderman on the Adelaide City Council. In December 1935 he was elected to the Legislative Council as a Liberal and Country League member and was a strong supporter of Thomas Playford in his endeavours to industrialize South Australia.

He continued to play a prominent role in business, serving as foundation Director and first Chairman of the South Australian Industries Assistance Corporation, a member of the Council for Scientific and Industrial Research and President of the Adelaide Chamber of Commerce (1929-1930) and the South Australian Chamber of Manufactures (1936-1939). He also held directorships in many Adelaide companies, was President of the National Safety Council and was a member of the Council of the University of Adelaide from 1925 to 1931.

During World War II he was appointed comptroller-general of the Australian Army Canteen, supervising its stores throughout Australia and overseas. The canteen returned a profit but Holden was sued for damages and taking bribes. The charges were never proved and the case lapsed. Other charges were made that General Motors-Holden’s had sabotaged the war effort but these too were found to be groundless when a federal committee of inquiry revealed that the company had helped materially by providing munitions for the armed forces.

Edward Holden was recognized for his services to business and community affairs when he was knighted in 1946. He died on 17th June 1947 and was cremated, unaware that the first car to be wholly built in Australia by General Motors-Holden’s would be given his family name. 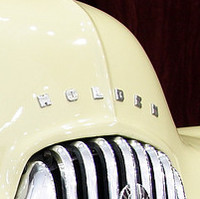 1949 Holden 48-215 sedan at the 2009 Melbourne International Motor Show. The 48-215 was the first car named for Edward Holden
Courtesy of/Photographer:Peter Zyczynski 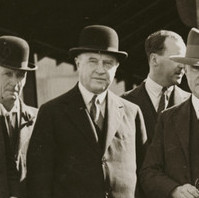 Buttfield, N., So great a change: The story of the Holden family in Australia (Sydney: Ure Smith, 1979).

O’Neil, B., J. Raftery and K. Round, eds., Playford’s South Australia: Essays on the history of South Australia 1933-1968 (Adelaide: Association of Professional Historians, 1996).