Gibb attained a scholarship and studied mechanical and electrical engineering at the South Australian School of Mines and Industries.
1917

Gibb joined the Australian Flying Corps as an air mechanic and served in France during the First World War. He was commissioned a pilot in February 1919.
1920 - 1923

Gibb was appointed Senior Research Assistant to Professor Robert Chapman at the University of Adelaide.
1925

While in Europe during the First World War, Gibb met his future wife, Margaret Harris. They were married in Devon, England.
1929

Gibb returned to England in 1924 and joined the firm C.A. Parsons & Co., which specialised in turbo-generators for power stations. He quickly rose through the ranks and was appointed Director and Chief Engineer by the company's founder, Sir Charles Parsons.
1940 - 1943

Director-General of Weapons and Instruments Production

During the Second World War, Gibb was employed by Great Britain's Ministry of Supply, and ultimately was designated its Director-General of Weapons and Instruments Production. His contribution to the Allied success at the Battle of El Alamein was acknowledged by Prime Minister Winston Churchill.
1943 - 1945

In this role, Gibb oversaw the development of the Centurion tank, as well as the 'seventeen pounder' stabilised gun. The latter was installed on Sherman tanks towards the end of the Second World War, and helped turn the tide of the conflict.
1945

In addition to his role as Vice-President, Gibb also twice received the Institution's Thomas Hawksley medal. He was also awarded Honorary Doctorates from the University of London and University of Durham, and elected a Fellow of the Royal Society.
1956

Gibb suffered a severe coronary thrombosis in 1948, and two others in 1953. He collapsed and died at Newark Airport in the United States, likely as a consequence of existing health problems.

Claude Dixon Gibb was a man whose prodigious energy, flair for publicity and wide experience brought him many honours and numerous chairmanships. He was knighted in 1945, elected a Fellow of the Royal Society in 1946 and made Knight Commander of the British Empire in 1956. From 1945 to 1951 he was Vice-President of the Institution of Mechanical Engineers, London, and twice received its Thomas Hawksley medal. Yet, in spite of all this, one of his most admired qualities was the pleasure he took in meeting and mixing with people on the shop floor. He was inclined to irascibility but was ready to express his opinions to all and to listen in return.

He was born at Alberton, South Australia, on 29th June 1898, the son of carrier John Gilbert Gibb and his wife, Caroline Elizabeth (née Dixon). He was educated at Alberton Primary School and Lefevre High School and his self-confidence, pugnacity and love of speed were evident early in his life. He said that he was ‘riding horses at the age of three, motor-cycling at fourteen, driving a car at sixteen and flying at nineteen’. From 1914 to 1917 a scholarship had taken him to the South Australian School of Mines and Industries, where he studied mechanical engineering. In 1917 he joined the Australian Flying Corps, became a pilot and served in France. It was during this time that he met Margaret Harris whom he married in Devon, England, on 26th December 1925.

After the war Gibb was appointed senior research assistant to Professor Robert Chapman at the University of Adelaide and found time for further study. At that time the opportunities for obtaining broad engineering experience in Australia were limited so he joined the firm of C.A. Parsons & Co. in England, which specialized in turbo-generators for power stations. Gibb quickly attracted notice and by 1929 Sir Charles Parsons made him a director of the firm and chief engineer.

During the Second World War his career took another turn. In 1940 he was employed at the Ministry of Supply and the following year was made Director-General of Weapons and Instruments Production. His immediate superior, Sir Harold Brown, wrote of him that he ‘became a leading member of the team, and with his outstanding drive and energy infused fresh life into the organization and helped to produce results which, without him, would have been almost impossible’. After the battle of El Alamein, the British Prime Minister, Sir Winston Churchill, acknowledged Gibb’s contribution to the ultimate success of the battle.

In 1943 Gibb became Director-General of Armoured Fighting Vehicles. He decided that his department would take full responsibility for design, a decision which was not altogether palatable to others, but the result was the Centurion tank, probably the outstanding tank of the war. Besides this, he designed the stabilized gun, the ‘seventeen pounder’ fitted to the Sherman tanks which provided support at a critical time. He also designed special tank developments for wading and for infantry support.

At the end of the war, Gibb returned to Parsons & Co. and was appointed Chairman and Managing Director. He also, in 1949, became Chairman of the Board of Reyrolle & Co. Ltd., an electricity supply company. When it was decided that industrial nuclear power plants were practical, the responsibility for their design and construction fell to Gibb. He brought together a consortium of eight firms and formed them into the Nuclear Power Plant Company. He was also the Chairman of Savage & Parsons Ltd. which supplied the turbo-alternators and gas-circulating blowers at Calder Hall. 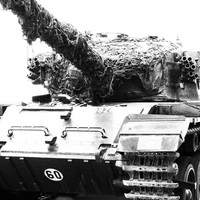