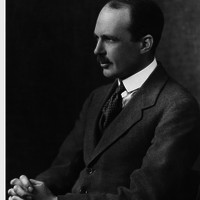 Lawrence Bragg jointly won the 1915 Nobel Prize for Physics with his father, William Bragg for their work in X-Ray Crystallography. As a student at Cambridge he discovered the famous Bragg Law which enabled both him and his father and their co-workers to solve many crystal structures including diamond, proteins and DNA . The work has proved foundational in much of 20th century physics and has led to breakthroughs in understanding living cells and the human genome.

Lawrence was born in Adelaide in 1890, the first child of William and Gwendolyn Bragg – he had a younger brother Robert and a sister Gwendolyn. Both boys attended St Peter’s College.

Lawrence excelled academically and studied physics, chemistry and mathematics under his father at the University of Adelaide where he graduated in 1908 then went to the UK when his parents returned there in 1909. He studied at the Cavendish Laboratories in Cambridge graduating with first class honours in 1911.

Together with his father, he researched X-ray crystallography for which they were jointly awarded the 1915 Nobel Prize in Physics. Lawrence was notified of this honour whilst serving on the Western Front in the First World War where he developed sound-ranging to locate enemy heavy guns. For his gallantry, he was awarded the Military Cross and an OBE.

Sadly, Lawrence’s brother Robert was killed at Gallipoli in 1915 a few weeks prior to the announcement of the Nobel Prize. His name is listed in the nearby War Memorial.

Long in his father’s shadow, his scientific genius and contributions were eventually recognised when Lawrence was made a Fellow of the Royal Society in 1921, and was appointed Head of the Cavendish Laboratory at Cambridge where Crick and Watson discovered the DNA “double helix” in 1953. He received many International awards and was knighted in 1965. He was made the Director of The Royal Institution in London in that year, following his father’s footsteps. He visited Adelaide in 1960. Lawrence and his wife Alice had 4 children. He died in 1971 and is buried at Trinity College, Cambridge. 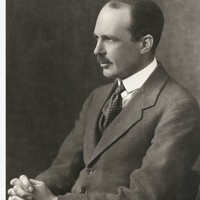 Image Courtesy of the State Library of South Australia, SLSA: B 4012, Public Domain 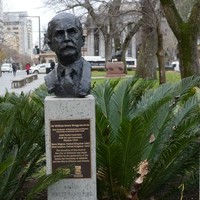