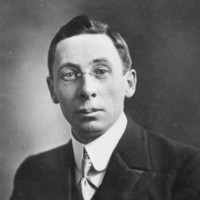 Upon completion of his schooling, Flynn trained for the ministry by working as a student lay pastor in the Victorian bush for the Presbyterian Church.
1910

While serving as a lay pastor in remote areas, Flynn developed a keen understanding of the isolation felt by people who lived in the bush, and began writing about them and their lives.
1911

Flynn completed studies for ordination with the Presbyterian Church, and immediately volunteered for service at the Smith of Dunesk Mission in South Australia's northern Flinders Ranges.
1912

Impressed with Flynn's reports of conditions in remote areas of the Northern Territory, the Presbyterian General Assembly designated him Superintendent of its newly-established Australian Inland Mission.
1928

After 17 years of effort, Flynn achieved a 'Mantle of Safety' for remote Australian communities through the establishment of the A.I.M. Aerial Medical Service at Cloncurry, Queensland. This organisation would later become the Royal Flying Doctor Service.
1932

Flynn married the A.I.M. secretary of the Sydney office, Jean Baird, when he was 51 years old.
1933

Flynn served as the Moderator-General of the Presbyterian Church of Australia.
1940 - 1941

John Flynn was born on 25th November 1880 at Moliagul, Victoria, the son of Thomas Eugene Flynn, a state school headmaster, and his wife Rosetta Forsyth (née Lester). He was raised a Presbyterian and educated at Snake Valley, Sunshine and Braybrook Primary Schools, taking his secondary schooling at the University High School, Carlton. He was a pupil-teacher from 1898 to 1902 before working as a home missionary for the Presbyterian Church in the Victorian bush. During the period to 1910 he studied theology at Melbourne University. Seeing scattered graves in remote areas brought home to him the isolation of bush folk and he began writing articles about the ‘Dread of Isolation’, using photographs, maps and statistics. By 1910 he had published his Bushman’s Companion and for many years edited periodicals, notably the Inlander, on the outback theme.

Ordained in 1911, Flynn was sent to Beltana and was based there until 1913. His parish stretched north to Oodnadatta where the church had already placed a nursing sister. He set himself to writing a comprehensive report on the needs of isolated people, presenting it to the 1912 Presbyterian General Assembly. This led to the formation of the Australian Inland Mission, which provided itinerant padres as well as outback hospitals. Flynn was the first superintendent, responsible for the northern half of the continent, with an initial establishment of one nursing hostel, one nursing sister, one padre and five camels. He was to carry this responsibility for 38 years, almost until his death.

He worked for many years to achieve his ‘Mantle of Safety’ through medicine, aviation and radio, covering thousands of miles in his specially equipped Dodge Buckboard. He disseminated information, lobbied for support and assembled a network of experienced people. In 1928 the A.I.M. Aerial Medical Service (later the Royal Flying Doctor Service) opened its first base at Cloncurry, Queensland, with radio contact starting the following year. The Service consisted of patrol padres, nursing sisters, welfare workers, flying doctors and radio operators. Key people that he enlisted included Hudson Fysh in aviation, Ernest Fisk and Alfred Traeger in radio, various parliamentarians for government support and Hugh Victor McKay whose bequest funded the Cloncurry base.

John Flynn was described by Fred McKay, his succesor at the A.I.M., as ‘a practical man with a restless, sensitive spirit’. He was a skilful photographer, using his pictures in promotional work. He learnt first aid and studied radio procedures, becoming a member of the Wireless Institute of Australia. He was also innovative, providing for ducted air cooling in his 1920 plans for the Alice Springs hostel.

Despite Australia’s hot climate, Flynn always wore a dark suit and waistcoat. He did not marry until he was 51, when Jean Baird, the A.I.M. secretary in the Sydney office, became his wife on 7th May 1932. His practical approach to Christian ministry meant that no churches were built. Instead, his patrol padres on camel or horseback ministered to people on their home ground. Flynn had a dry sense of humour, was compassionate, a good listener, and ecumenical in his faith. Understandab1y, he amassed a remarkable range of friendships. His honours included an O.B.E. in 1933 and Honorary Doctorates of Divinity from Toronto (1940) and McGill Universities (1941). He was Moderator-General of the Presbyterian Church of Australia from 1939 to 1942.

John Flynn died on 5th May 1951 in Sydney. His ashes were interred at Mt. Gillen, near Alice Springs, and the site became a small national reserve with a granite monument. In the same year a commemorative cairn was placed 27 kilometres north of Tennant Creek and in 1956 the John Flynn Memorial Church was opened in Alice Springs. Flynn is also honoured on Australia’s $20 note. His ‘Mantle of Safety’ is of national importance today as the Royal Flying Doctor Service continues to provide both routine and emergency health services to the whole of Australia’s isolated areas. 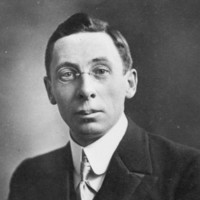 Photographic portrait of Reverend John Flynn during his tenure as Presbyterian Minister at Beltana, c. 1912

Image courtesy of the State Library of South Australia, SLSA: B 61867, Public Domain 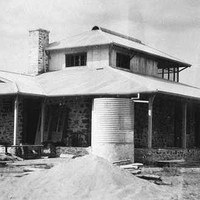 The original Alice Springs Hospital in 1926. It was designed and built by John Flynn as part of the Australian Inland Mission