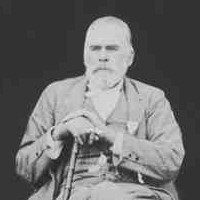 Inventor, politician, philanthropist and founder of a famous engineering firm, James Martin was outstanding among the remarkable individuals who established Gawler’s renown in the latter half of the nineteenth century as a thriving industrial and cultural centre. He was also pre-eminent among the thousands of Cornish immigrants who, attracted by South Australia’s mining activities, made a distinctive contribution to the character of the colony.

Mining and inventive engineering were in Martin’s blood. His grandfather had set up a foundry that gave its name, Foundry, to a village in Cornwall, England, where James was born on 23rd April 1821. Apprenticed to a millwright, the young man had little formal education, but his prodigious talent for innovation was first shown by his involvement in the invention of a ‘man engine’ (lift) which was widely adopted and must have saved the lives of hundreds of workers in the hazardous mine shafts.

Martin arrived in South Australia on the Belle Alliance in July 1847, seeking better opportunities and relief from asthma. He was employed for a time by John Ridley but, as local legend has it, moved north to Gawler in June 1848 in a dray carrying his wife, his furniture and his tools. He felled a red gum by Galton Street and made his first lathe. As a blacksmith, he could turn his hand to anything and was soon noted for the quality of his work. He expanded into the manufacture of farm implements, bullock drays and iron work, and James Martin & Co. was soon operating in other towns such as Quorn and Gladstone. In 1874 he went into partnership with Frederick May and began making mining machinery.

Martin reached the summit of his engineering success when he moved into railway rolling stock and rode the railways boom. In 1888 he won a government contract of £167,000 for the construction of 52 locomotives. He was to build a great many more and his beautifully designed trains steamed all over Australia. A special branch line was built to his Phoenix Foundry in the heart of Gawler, which, at its peak in 1898, covered 18 acres and employed 700 workers. Only fragments remain of this manufacturing centre, which amounted to an industrial inner city. Competition came from other foundries, such as that of the May Brothers, but the Phoenix was the largest.

Martin built himself a fine villa, ‘Trévu’ (which still stands) and, as was expected of captains of industry, he moved into public affairs. He was elected Mayor of Gawler several times. He represented Barossa in the House of Assembly in 1865-68 and North-Eastern Province in the Legislative Council in 1885-99. He is best remembered as a parliamentarian for bringing about the construction of the Barossa Reservoir, which began to supply Gawler and the district in 1902.

He died on 27th December 1899, to ‘much mourning’, and was buried at the Willaston Cemetery. The local newspaper, the Bunyip, printed a long and sincere tribute to Gawler’s great benefactor, who had provided industrial pride, economic spin-offs and steady work for many people. James Martin was thrice a widower, having married Christiana Fox on 28th March 1848 (she bore him two children), Ann Lock on 6th March 1853 and Charlotte Bradley on 2nd August 1858.

He left an estate of £27,000, of which the landed property went to his son John, a farmer, and the business to a nephew, John Felix Martin. After the turn of the century, James Martin & Co. declined amid changing economic circumstances and was eventually absorbed by Perry Engineering.

James Martin can be seen as a bright exemplar of the kind of repectable, hard working, politically aware people that George Fife Angas wanted to attract to the ‘Paradise of Dissent’. He is still warmly remembered in the Gawler folk memory as a likeable and loyal Gawlerite. By the river there stands a statue of this fine engineer, who was popularly hailed as ‘The Father of Gawler’.

This entry was first published in S.A.’s Greats: The men and women of the North Terrace plaques, edited by John Healey (Historical Society of South Australia Inc., 2001) 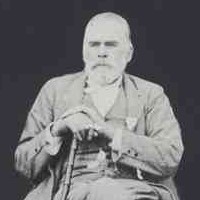 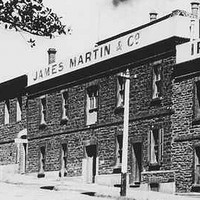 Whitelock, D., Gawler, Colonel Light’s country town: A history of Gawler and its region (Gawler: Corporation of the Town of Gawler, 1989).

Associate of:
Frederick May