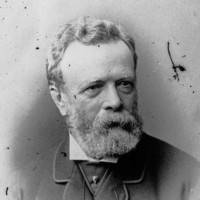 George Woodroffe Goyder was born in London, England, in 1826, the eldest son of physician and preacher David George Goyder and his wife Sarah (née Etherington). When the family moved to Glasgow, George joined an engineering firm and studied surveying. He emigrated to Sydney in 1848 and three years later joined the South Australian civil service as a draftsman. On 10th December 1851 he married Frances Mary Smith and they had nine children. In July 1853 he became chief clerk in the Lands and Survey Department. Four years later he was appointed Assistant Surveyor-General and in 1861 Surveyor-General, a position he held until 1893.

For more than forty years Goyder offered advice and made far-reaching decisions on almost every aspect of surveying, railway construction, valuations, forestry, conservation, mining and many other matters. He often went into the field checking surveyors and taking over the actual survey work from incompetent men. During this time he wrote thousands of letters every year though he is mainly remembered for his famous ‘line of rainfall’. As Inspector of Mines, he visited many of the newly discovered sites and became known as ‘Little Energy’.

As early as 1858 Goyder became involved in the selection and survey of government towns. By the 1860s the government surveyed towns in agricultural areas and it was here that Goyder’s ideas were followed and town designs changed. During the severe drought of 1863-1866, he went north to re-assess pastoral properties. His line of travel, which amounted to nearly 5,000 kilometres on horseback, marked off a line indicating the limit of reliable annual rainfall. It separated lands suitable for agriculture from those fit only for pastoral use. Not all agreed with his line and some even called it ‘God’s line’ or ‘Goyder’s line of foolery’. Although it was disregarded by the Government in the 1870s, in less than ten years the Surveyor-General was proved right. Goyder was also active in the Northern Territory. In 1869 he and his men surveyed over 600,000 acres at the Top End, recommended Palmerston (now Darwin) as the site for the capital and selected land suitable for growing tropical produce.

The 1860s were a difficult decade for Goyder as he supervised town surveys and the leasing of pastoral land. While he was away on one of his many trips in 1863, his wife, who had already raised seven children, gave birth to twins who did not live. She never recovered from this loss and the loneliness she felt when Goyder was away. During a holiday in England she took an overdose of sleeping pills and died on 8th April 1870. On 20th November 1871 Goyder married her sister, Ellen Priscilla and they had three children.

As the first Chairman of the Forest Board from 1875 to 1883, he was keen to conserve and manage timber and water resources. Most of all he strongly rejected the view that ‘rain would follow the plough’ or that rainfall would increase when more trees were planted. In 1875 Goyder was also appointed Chairman of the Railway Commission which was to look into building a railway to the Yudanamutana district.

As an administrator Goyder was a strict disciplinarian but always fair to his men. Despite complaints by graziers, farmers and miners, his decisions were accepted because of his sound reputation. Several family members found work in his department and some said that he had turned it into ‘a kind of family Joint Stock Company’. He was created C.M.G. in 1889 and when he retired in 1894 was given a purse of 1,000 sovereigns. He died on 2nd November 1898 and was buried at Stirling East Cemetery. His name is commemorated by Goyder’s Lagoon on the Birdsville Track, the electoral division of Goyder and by Mount Woodroffe, the highest mountain in South Australia. 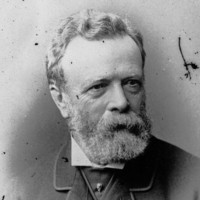 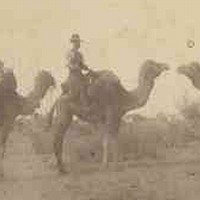 George Woodroffe Goyder with a camel team on an assessment trip during his tenure as Government Assayer, 1888