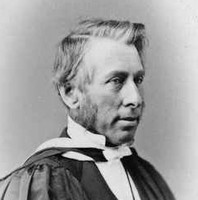 After attending Cambridge University, Farr was ordained a priest and served several parishes in Cornwall.
1846

While in Cornwall, Farr met Julia Warren Ord. They were subsequently married at Woolwich.
1854

Due to his wife's poor health, and dissatisfaction with the Church of England, Farr answered an advertisement to serve as headmaster of Adelaide's Collegiate School of St. Peter. He and his family arrived in South Australia aboard the vessel 'Daylesford'.
1869 - 1886

When Farr retired as headmaster of St. Peter's, the school had gained the prestige of having trained the majority of South Australian boys who had gone on to study at British universities.
1883

Farr was awarded a Doctorate of Laws from Cambridge University; his thesis explored the Real Property Act of South Australia.
1887 - 1893

Vice-Chancellor of University of Adelaide

George Farr was born in London, England, on 2nd July 1819, the son of linen merchant George Farr and his wife Eleanora (née Goodall). After Cambridge studies, he was ordained in 1845 and served in several parishes in Cornwall. He married Julia Warren Ord in 1846. It was her poor health and their doctor’s advice to seek a drier environment that led Farr to respond to the advertisement of Bishop Short for a headmaster for the relatively new Church of England Collegiate School of St. Peter in Adelaide. In July 1854 the couple arrived in South Australia aboard the Daylesford.

Farr found the secondary school of 65 boys in a precarious financial position and suffering a decline in public esteem. When he retired 24 years later, he had given the school stability and a distinctive ethos. He adapted the English school model to the needs of colonial society, the traditional courses in classics and Euclid being complemented by ‘practical education’. He admitted in 1878 that he had always been unashamedly influenced by the educational philosophy of Thomas Arnold of Rugby School. All boys were not expected to turn out as scholars but they were expected to be gentlemen, with a striving for some form of public service. In 1890 this ideal was enshrined in the motto of the College, ‘Pro deo et patria’ --- ‘For God and country’.

Farr’s other main concern was to maintain a spirit of religious tolerance in the school which, though an Anglican institution, had a constitution that forbade any religious test for entry. Farr later conceded that his oft-repeated emphasis on ‘Christian gentlemen’ was offensive to Jewish parents. He used the Sunday sermon to mould the moral character of his students. Extempore preaching, a Methodist style of worship with which he had experimented in his Cornish parishes, was well suited to a congregation consisting largely of boys. The diminutive new headmaster was not without humour, the text for his first sermon at the school being ‘But the Lord said unto Samuel, Look not on his countenance, or on the height of his stature.’

Farr began his first day as a classroom teacher by caning three boys in error. Corporal punishment, however, was seldom used in his early days and Farr was hardly a strict disciplinarian, though he once had to punish the Bishop’s son, who had confessed to stealing wine from the headmaster’s cellar. Farr used his experience and expertise from his university days as a reporter for prize fights to deal with the problem he had inherited of a prevalence of fighting amongst the boys. He offered to act as umpire for any fight between boys who were unable to resolve their differences peacefully. Few accepted the offer and discipline was soon restored. He once said, ‘I judge character not only by the scrapes boys get into, but also by the way they get out of them.’

By the 1870s St. Peter’s College had the prestige of having trained most of the boys in South Australia who had gone on to study at British universities. There they had demonstrated that they could compete successfully with their British contemporaries.

After his retirement in 1878, Farr was active in service to the church and to the community. He was the incumbent of several suburban parishes, was Vice-Chancellor of the University of Adelaide from 1887 to 1893 and Chairman of the Public Library, Museum and Art Gallery from 1869 to 1886. During a visit to England in 1883, he was awarded a Doctorate of Laws from Cambridge University for a thesis on the Real Property Act of South Australia.

Farr never really burned with creative energy or fierce ambition but his leadership established St. Peter’s as South Australia’s leading school. He oversaw the early promotion of science in the curriculum, which also included ‘modern’ and eventually ‘commercial’ subjects. He strove at all times to inculcate the Arnoldian concepts of gentlemanly behaviour, honesty and good sportsmanship.

Dr. Farr died in Adelaide on 7th February 1904 and was buried at North Road Cemetery. 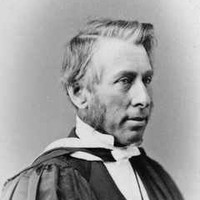 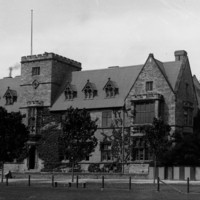