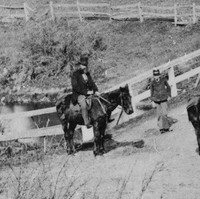 George William Hannaford was born on 4 January 1852, the son of farmer George Williams Hannaford and his wife Ann (née Cornish) of ‘Hatchlands’ in Hartley Vale, near Gumeracha, South Australia. His parents had both emigrated from Devon, England, with their families, aboard the Brightman in 1840 and were married a few years later. The Hannaford family made a prominent contribution to local affairs and to the horticultural industry around Gumeracha and Cudlee Creek. George Williams Hannaford was one of the pioneer apple growers of the colony and also planted a vineyard, grew wheat and grazed cattle. He is reputed to have built the first wheat stack in South Australia.

Young George and his siblings attended the school at Tungkillo, boarding in the town during the week. Their father would drive them there each Monday and at the end of the week they would walk home, a distance of fourteen miles. George Hannaford actively assisted his father in his apple growing and farming activities. In his early years he also helped his brother Samuel to move cattle during a drought and from 1865 worked on the family farm ‘Wattle Vale’ at Riverton.

In 1873 he obtained farming land on Yorke Peninsula and took a prominent role in the formation of a local branch of the Agricultural and Horticultural Society. He was also appointed a Justice of the Peace and served on the local Board of Advice and Main Roads Board on the Peninsula. He identified himself with a number of progressive movements in the state and frequently contributed to the press. He was a wide reader and an effective public speaker, serving for some years as a lay preacher for the Baptist Church.

Following the establishment of the North-East Experimental Farm at Mannahill, Hannaford was appointed overseer there. He frequently held a police court and also acted as coroner. On 3 February 1876 he married a widow, Bertha Hayler Whibly (née Linfield), and they had three sons and three daughters.

With the farm’s closure in 1880 he resettled at ‘Dingo Vale’ near Cudlee Creek, where he planted apples and pears and engaged in fruit export, forestry, hop growing, wattle cultivation and bee-keeping. He planted more than 100 acres of orchards and in 1896 successfully exported apples to England, Germany and South Africa. They were packed by his sons and on arrival at the overseas markets brought high prices.

At the same time as pursuing apple growing, Hannaford established his ‘Gipsy Apiary’ which comprised several hundred bee-hives housing queen bees imported from Italy. He thus pioneered the production of honey in the Adelaide hills.

In 1907 he retired to Kent Town and died there on 7 November 1927. He was buried in the family vault at Cudlee Creek.

His son, Ernest Hayler Hannaford (1879-1955), took over ‘The Briars’ at Millbrook, where he developed an orchard of fifty acres, growing apples, pears and plums, and exporting several varieties of apple. He also kept 360 colonies of bees, which produced ten tons of honey per year. He grew wattles for bark tanning and was responsible for planting the pine forest around the Millbrook Reservoir. He served as the Mayor of St Peter’s for a total of seven years and in 1927-30 held the seat of Murray in the House of Assembly. 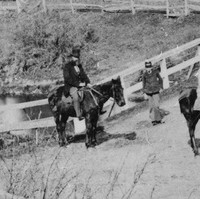 Image courtesy of the State Library of South Australia, SLSA: B 10854, Public Domain