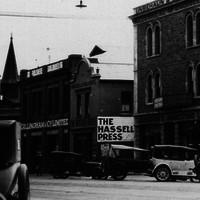 George Frederick Hassell was born on 22nd February 1869 at Leicester, England, the son of printer George Hassell and his wife Emma (née Buckley). When fourteen years old, George junior showed an interest in ‘the embellishment of books’, persuading his father to buy some decorative types for a small volume of verse. The family came to Adelaide in 1883 and in 1885 the printing business G. Hassell & Son was opened in Victoria Square. Within two years the business moved to larger premises at 4 Franklin Street, next to the General Post Office. George senior retired in 1900 and handed the business to George junior and his brother Frank.

Under George senior the business had produced mainly job printing and small newspapers but under his sons the quality and variety of the output improved enormously. In 1904 the firm began printing for the University of Adelaide and ceased only in 1953. The brothers studied the work of the best modern presses in England and America, and began to acquire a variety of type faces and papers to suit a range of needs. In 1910 an increase in business led them to move to 104 Currie Street, where their best works were printed. At this time the name ‘The Hassell Press’ was adopted. The brothers’ partnership was dissolved in 1922 when Frank Hassell retired and George’s son, Frederick W. Hassell, whose wife was also a printer, joined him in the business. In 1926 and 1936 George Hassell returned to England to study at first hand developments in typography.

The elegantly produced books and pamphlets of the Hassell Press set a standard of printing never before reached or even attempted in South Australia. As Douglas Dunstan, himself Australia’s leading typographer and head of the Griffin Press in its heyday, wrote, at the Hassell Press ‘quality of design and excellence of presswork were of the utmost importance’. Three landmark works were The Feast of Adonis (1910) by Theocritus, translated by Hassell’s close friend R.J.M. Clucas, probably the first book to use Greek type in Australia and the first to contain the Greek text and its English translation on facing pages; and two small works by Henry Lawson, Joseph’s Dreams and The Auld Shop and the New, both printed in 1923 for Angus & Robertson in editions limited to 75 copies. They prompted publisher George Robertson to predict that ‘collectors of the next century will hunt for Hassell’s books just as they do nowadays for Foulis’ and Baskerville’s’ (two influential eighteenth-century British printing houses).

Other works among the great variety of titles printed included Crossing the Dead Heart (1946) by C.T. Madigan, Shrubs and Trees for Australian Gardens (1948) by Ernest Lord, the magazine Desiderata and several private school magazines. Hassell also printed works by Sir Douglas Mawson, William Muirden, Paris Nesbit and Archibald Grenfell Price. Among publishers for whom he printed books or pamphlets were the distinguished Adelaide firm of booksellers F.W. Preece, and Lothian (Melbourne). Unusually, as well as printing books, the Hassell Press published them. Their list included Fred Johns’ A Journalist’s Jottings (1922), Who’s Who in Australia 1927-8 and the very handsome Art and Letters: Hassell’s Australian Miscellany (1921). The firm also published works by Sir William Mitchell, Adolf Schulz and Simpson Newland.

George Hassell married Agnes Anna McLeish on 12th November 1890 and they had two sons. Agnes Hassell died in 1933 and on 1st June 1940 George married Ida Frances Cordon. Described as one of the best-read men in Adelaide, he was a man of great personal charm and sincerity of character. He was also a lover of classical music and owned over 1,200 recordings.

George Hassell died on 2nd November 1945 and was buried at West Terrace Cemetery. His son Frederick carried on the business, maintaining his father’s high standards, until 1955 when, at his own request, the Hassell Press merged with Griffin Press Ltd. Image courtesty of the State Library of South Australia, SLSA: B 10333, Public Domain 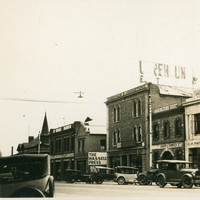