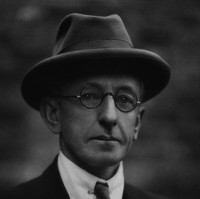 Clarence Michael James Dennis was born in Auburn, South Australia to parents James and Katherine (Kate) Dennis. He was the oldest of three sons.
1881

Dennis commenced his education at Gladstone Primary School, where he edited and contributed to the school paper the 'Weary Weekly'.
1898

First experience as a professional journalist

Dennis spent a year as a contributing writer for the 'Critic' before returning to South Australia's mid-north and then Broken Hill.
1903

Following another stint with the 'Critic', Dennis published his first poem in the 'Bulletin'.
1906

Dennis co-founded the Adelaide-based 'Gadfly' and over the next 21 months contributed approximately 200 pieces of prose or verse, either under his own name or several pseudonyms.
1907

Due to financial issues, Dennis left the staff of the 'Gadfly' and moved to Melbourne. He subsequently moved to Toolangi, near Healesville, and lived there for most of the rest of his life.
1908

One of Dennis' best-known verses, 'The Australaise' was published in the 'Bulletin' and won a special prize in a national songwriting competition.
1913

Dennis met Robert Croll, who would greatly influence his life as both a friend and critic. Notably, Croll introduced Dennis to John Roberts, who provided Dennis with accommodation, financial help and encouragement. Dennis would come to regard Roberts and his wife as surrogate family.
1913

Dennis published his first book 'Backblock Ballads and Other Verses', as well as the first appearance (in book form) of parts of 'The Songs of a Sentimental Bloke' and the first version of his glossary of Australian slang.
1915

Publishes 'The Songs of a Sentimental Bloke'

Dennis' most successful work, 'The Songs of a Sentimental Bloke' was published by Angus & Robertson, and featured illustrations by Hal Gye. It went to 15 editions in three years and remains the best-selling book of Australian poetry ever published.
1916 - 1935

Clarence Michael James Dennis was born at the Auburn Hotel, South Australia, on 7 September 1876. His father, James Dennis, a retired master mariner, came to Australia from Ireland and became a hotel licensee in Burra before taking over the hotel at Auburn. After the death of his first wife in 1874 he married Katherine (Kate) Tobin and C.J. Dennis was the first of their three sons.

Dennis began his education in September 1881 at Gladstone Primary School, where he edited and contributed to the Weary Weekly, of which no extant copies are known. He attended St. Aloysius College, Sevenhill, before becoming a boarder at Christian Brothers’ College, Adelaide, from 1890 to 1892. He left school at the age of seventeen to work as a clerk but was discharged for reading a Rider Haggard novel during working hours. His first experience of journalism came in 1898 when he spent a year with the Critic before returning to the mid-north and then Broken Hill. After a further stint with the Critic he achieved the ambition of all writers of the day when he had his first verse published in the Bulletin on 19 November 1903. He co-founded the Adelaide satirical paper the Gadfly in February 1906 and over the next 21 months contributed to it some 200 pieces in prose or verse under his own name as well as several pseudonyms.

For financial reasons Dennis left the Gadfly in 1907 and went to Melbourne. In 1908 he moved to Toolangi, near Healesville, and lived there, first in a tent with the artist Hal Waugh and later in a small wooden hut. Dennis lived in the area for most of the rest of his life and in the 1920s built his house ‘Arden’ there. One of his best-known verses, ‘The Australaise’, was published in the Bulletin in 1908, winning a special prize in a national song competition.

The year 1913 was a watershed for Dennis. He met Robert Croll, who was to have a major influence on his life as a friend and critic. Croll introduced him to John Garibaldi (Garry) Roberts and his wife, who had a holiday home at nearby Kallista. Roberts, who knew many of Melbourne’s artists and writers, was a generous man who provided Dennis with accommodation, financial help and encouragement. Dennis regarded Mr. and Mrs. Roberts almost as his family. Also in 1913 Dennis published his first book, Backblock Ballads and Other Verses. Despite containing the first appearance in book form of parts of The Songs of a Sentimental Bloke and the first version of Dennis’s glossary of Australian slang (an important feature of most of his later books), it was not a success.

The Songs of a Sentimental Bloke, illustrated by Hal Gye, was published by Angus & Robertson in October 1915 and signalled the beginning of an enduring collaboration. The simple, humorous story of down-to-earth people, told in rhyming verse rich in Australian slang, was an immediate success. It went to fifteen editions in three years and remains the best-selling book of Australian poetry ever published. Dennis said that he had ‘tried to tell a common but very beautiful story in coarse language, to prove --- amongst other things --- that life and love can be just as real and splendid to the “common” bloke as to the “cultured” ’. It was followed by The Moods of Ginger Mick (1916), Doreen (1917), The Glugs of Gosh (1917), Digger Smith (1918), A Book for Kids (1921), Rose of Spadgers (1924) and The Singing Garden (1935). In addition, Dennis wrote a column almost continuously for the Melbourne Herald from 1922 until his death. None of his other writings or characters achieved the success of ‘The Bloke’.

On 28 June 1917 Dennis married Olive Herron, also a writer. ‘The Laureate of the Larrikin’, as he was known, died on 22 June 1938 and was buried at Box Hill Cemetery. There are memorials to him in Melbourne, and in Auburn where a Dennis festival is held each September. 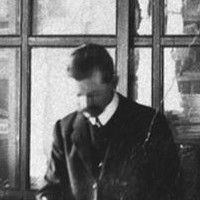 Image courtesy of the State Library of South Australia, SLSA: B 61934, Public Domain 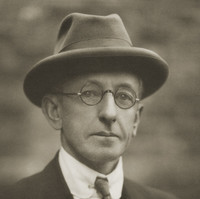 McLaren, IF, C.J. Dennis: A comprehensive bibliography (Adelaide: Libraries Board of South Australia, 1979).