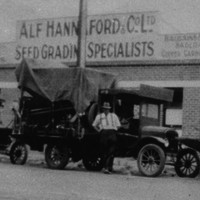 Alfred Hannaford was born on the 23rd June 1890 at ‘Wattle Vale’ near Riverton, South Australia, the son of farmer John Hannaford and his wife Elizabeth (née Shearer), and the nephew of George Hannaford. He attended Riverton Public School until the sixth grade and then began his working life on the family farm. On 2nd April 1913 he married Ivy Hill and they had five children, who all worked in their father’s company at various times.

In 1914, while attending a farmer’s conference, Hannaford saw a machine for the treatment of seed wheat against the parasitic fungal diseases flag smut and take-all. This treatment involved soaking the grain in a solution of either copper sulphate or formaldehyde to kill adhering fungal spores, then draining the seed for sowing the next day. This method was very labour intensive and, although the principle of the machine was an improvement on previous techniques, Hannaford declared, ‘If I can’t make a better one, I’ll eat my hat!’ In the farm smithy, he devised the first mechanical wet pickling machine, fashioned in part from a railway sleeper, which agitated the seed in a formalin solution at the rate of some fifteen bags per hour. A drought the same year forced him to move to Adelaide where he refined and patented the design. In 1915 he formed Alf Hannaford and Company and, with the assistance of J.E. Swan, production of the machines began. The picklers immediately proved popular. Although demand for them multiplied, Hannaford took a job with the H.V. McKay Harvester Company for two years to accumulate business experience.

At about this time Dr. D. Smith of the New South Wales Department of Agriculture found that while the chemicals copper sulphate and formaldehyde affected the germination capacity of the seed, dry copper carbonate powder did not. With this information, Hannaford, in 1923, invented a combined seed grader and dry pickling machine which could work at rates of up to forty bushels per hour. In 1927, in another Australian first, the company began producing its machines in steel instead of the earlier wood. The following year saw the formation of Alf Hannaford and Company Limited, with the factory at Woodville manufacturing up to 600 units per year.

During the Depression farmers were unable to buy Hannaford’s products, so he mounted his machines on trucks and sent them travelling around the state, preparing the seed on a contract basis. By 1933 two hundred of these trucks were on the road and in 1937 branches of the company were opened in Victoria and Western Australia. In the same year Hannaford developed a clover seed harvester and extensive harvesting of ‘Barrel Clover’ seed began. This was later renamed ‘Hannaford Barrel Medic’ in his honour. In 1944 there were 11,000 farmers having their grain cleaned, chemically dusted and freed of foreign matter by the Hannaford On-Farm Grading Service and even twenty years after the Depression 16,000 farmers were using the service. By 1955 the company was manufacturing centrifugal header-screeners which could be fitted to most makes of harvesters.

Alfred Hannaford retired as Managing Director in 1960 and in the same year he was appointed M.B.E. for his services to agriculture. Throughout his life he travelled widely, particularly in Europe and South Africa. He was an active Rotarian and a Methodist lay preacher. He died in Adelaide on the 25th August 1969 and was cremated. He bequeathed $372,000 to the Waite Agricultural Research Institute to support research into pasture improvement and to fund lectures, seminars and visiting fellows. The Hannaford Building at the Institute is named in his honour.

After his death the company was taken over by other firms and in 1987 was renamed Hannaford Seedmaster Services. Its core business is still the mobile grading fleet which operates in essentially the same manner as Alfred Hannaford intended in 1929. 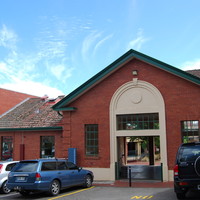 The Hannaford Building at the Waite Agricultural Institute, 26 February 2010. It is named in honour of Alfred Hannaford
Courtesy of/Photographer:Phaedrus Fleurieu 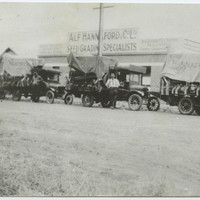