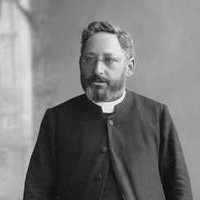 Abraham Boas was born on 25th November 1842 in Amsterdam, Holland, the son of Rabbi Tobias Boas and Eva Salomon (née Linse). Coming from a family of distinguished Jewish scholars and ministers, he trained at the Amsterdam Theological Seminary and did further study in England before being appointed minister at the Southampton Synagogue. Here, in 1868, observers noted that ‘he might be sent to Adelaide, where a great field is open for the cultivation of the talent of such a promising young man’. Boas set sail on the Tamesa in November 1869.

The stoutly-built ship lost most of her masts, rigging and sails in a cyclone 500 miles east of the Cape of Good Hope but survived to arrive at Semaphore in February 1870. The young minister was met by several members of the local Jewish congregation, who accompanied him on the walk to Adelaide. Within a year of Boas’ arrival, a new synagogue with accommodation for 350 worshippers was consecrated in Rundle Street, Adelaide, replacing an earlier one nearby. It was in the new synagogue that Boas married Elizabeth Solomon on 15th May 1873. They had ten children.

Short and thick-set, with greying hair and piercing eyes behind his steel-rimmed glasses, Boas’ interests were wide-ranging and his sonorous voice made him a popular speaker. His sermons and correspondence had great vitality, to which was added a tolerant outlook and a belief in the sacredness of human personality.

The influence of Abraham Tobias Boas was greater and wider than his role as minister to the Jewish community of Adelaide might suggest. He addressed gatherings in Sydney, Melbourne, Hobart and Launceston, and made pastoral visits to the west, opening schools and synagogues in Perth, Fremantle and Coolgardie.

His standing in wider society was demonstrated at Easter 1899 when he intervened in a bitter controversy raging between Adelaide’s Protestants and Roman Catholics. He reminded the protagonists of the futility of mutual recriminations and urged them to find a common point of contact. ‘In this utilitarian age,’ he wrote, ‘when the race for wealth is slowly thrusting away the concerns of religious life and spiritual environments, it behoves the clergy of all churches and synagogues to gather their strength . . . and to stimulate the indifferent and wavering with the beauties of religion, instead of spending it in what, to my mind, is a useless disputation . . . which can only engender a feeling of shame in the breast of the intelligent thinker.’ This moved the Roman Catholic Archbishop to declare that Boas was ‘the best Christian in Adelaide’.

He was esteemed as a student of English literature and drama, particularly Shakespeare, and was a foundation member of the District Trained Nursing Society, in which capacity he was several times called upon to act as a midwife. He was Chairman of the board of the James Brown Memorial Trust for housing indigent tuberculosis patients, President of the Jewish Literary Society and first Chairman of the Jewish Choristers’ Club. He headed the Synagogue’s Sabbath School, helped to found the Jewish Burial Society and was on the board of the Home for Incurables (now the Julia Farr Centre).

Boas not only attended to the religious and social needs of Adelaide’s Jewish community during a half-century of ministry but was also a teacher and friend to many beyond his congregation. He was so active in the spiritual, social and intellectual life of the community that he did not take a holiday in 40 years. However, his activity was much curtailed by a stroke in 1918, two years after the death of his wife. In 1921 he was given the status of Rabbi in recognition of more than 50 years’ service to the Adelaide congregation.

He died at his North Adelaide home on 20th February 1923 and was buried at West Terrace Cemetery. 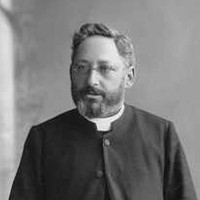 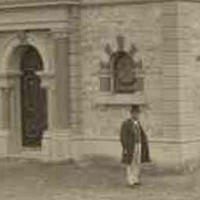 A man (possibly Rabbi Abraham Boas) standing next to the recently-completed new Synagogue in Adelaide, c. 1871