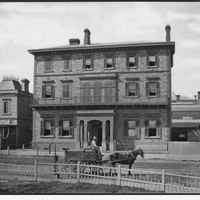 In 1863 14 prominent colonists, including John Baker, John Morphett and Arthur Blyth, determined to raise £4000 in £50 debentures to finance a club and build a clubhouse.
1864

The Club purchased land on North Terrace opposite Government House, and moved into premises designed by a foundation member, Edward Angus Hamilton, in 1864.

Modelled on the gentlemen’s clubs that proliferated in London from the eighteenth century, the Adelaide Club resembles bodies established at about the same time in the capital cities of the other Australian colonies.

After the failure of several clubs, in 1863 14 prominent colonists, including John Baker, John Morphett and Arthur Blyth, determined to raise £4000 in £50 debentures to finance a club and build a clubhouse. By October 1864, 120 members had been admitted without election. Virtually all were leaders in the colony, such as George Fife and John Howard Angas, Henry Ayers, Robert Barr Smith, Thomas Elder, James Hurtle Fisher, Walter Watson Hughes and George Mayo. By far the largest group were pastoralists, followed by businessmen, with lawyers and government officials also prominent. Many who joined served in the legislature, including six past, present or future premiers. The majority of members were Anglicans, a few Presbyterian or Nonconformist, with one or two Roman Catholics and Jews. The Club adopted the Grass Tree as its crest, purchased land on North Terrace opposite Government House, and moved into premises designed by a foundation member, Edward Angus Hamilton, in 1864.

By July 1865 membership had reached 125 and in 1920 was 288. This membership reflected the colony’s economy; pastoralists were dominant until World War I, when an increasing number of manufacturers, warehousemen, newspaper proprietors and later businessmen joined them. Numbers steadily grew and in 2001 the Club has some 900 members, some the fifth or even sixth generation of their families to belong. There are also many who have made or are currently making a significant contribution to the state.

The Adelaide Club is unique in Australia. While for a brief period (1877–c. 1900) the Austral Club functioned in Pirie Street in the city, when it closed many of its members, mainly businessmen, joined the Adelaide Club. Thus there has never been a rival club in Adelaide, reflecting the unity of South Australia’s elite. For many years a perception has persisted that the Adelaide Club is not only the upholder of Victorian values and traditions but that it is also the real source of power in the state. The former allegation is frivolous, the latter is untrue. 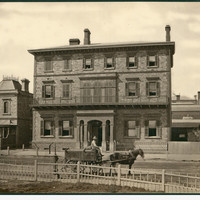 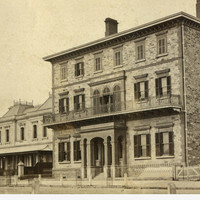 Image courtesy of the State Library of South Australia, SLSA: B 1917, public domain

Hi George,
We don't hold any of the records ourselves, but the State Library has quite a significant collection related to the Adelaide Club. You might start with - 'The Adelaide Club: myth and reality (research paper) Playford, John, 1935-2003, which I suspect will have references to membership records. You can search the State Library catalogue here: https://www.catalog.slsa.sa.gov.au/

If there are records, can you tell me if my great-grandfather, George Spencer, was a member of The Adelaide Club? Not sure of the exact date, but maybe circa late 1800's or early 1900's. I'm trying to build a family history. He was an English emigrant/remittance man. I understand he also rode in the Adelaide Hunt. Any information about him and his activities/interests within and outside the club would be appreciated. Sincerely, George Spencer.