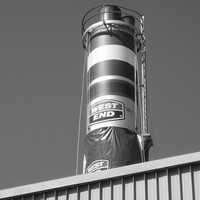 First annual display of Christmas decorations on the southern bank of the River Torrens below the brewery, 1959.

The brewery which became part of the South Australian Brewing Co. Ltd had its beginning in a rather problematic way. William Henry Clark who had established a brewery on Halifax Street, Adelaide in the 1840s eventually became insolvent. With financial backing from businessman and pastoralist John Haimes, Clark built a brewery on town acre 66, at the western end of Hindley Street, in 1859. He named this ‘West End’. However, Clark still had to face the Insolvency Court and to avoid that he went to Melbourne in early 1860 – at the time there were no extradition agreements between the colonies.

William Knox Simms had entered into a partnership with Clark in the Halifax Brewery in 1856 but ended the arrangement early in 1857 when Clark failed to repay even the interest on money Simms had loaned him. This placed Simms in a difficult financial situation and he became insolvent himself. As Clark had left South Australia, Haimes, an old friend of Simms, invited him to manage the West End Brewery. This time Simms was successful and gradually he developed the brewery, owning it in partnership with Edgar Chapman by 1866.

In 1876 Edwin Smith built a large brewery complete with malting facilities at Kent Town. He and Simms decided to amalgamate their breweries in 1888 and together with wine and spirit merchants, Rounsevell & Simms (Alfred Simms, WK Simms’ son), they formed The South Australian Brewing, Malting & Wine & Spirit Co. Ltd. All brewing was carried out at West End and the Kent Town complex was used for malting only. In 1893 the board decided to dispose of the wine and spirit business to two Adelaide wine merchants, AE & F Tolley and Milne & Co., and change the company name to The South Australian Brewing Co. Ltd (SABCo). At the time of this merger the company owned 44 hotels and leased 65. The ‘tied house’ system then in operation confined licensees of these hotels to dispense only the hotel owner’s/leaseholder’s products; this continued until the federal Trade Practices Act 1974.

During these formative years, Robert Stock, Smith’s brother-in-law and manager of the Kent Town Brewery, was influential in arrangements for amalgamating the two breweries. He became chairman of the board and general manager of SABCo; he died in 1904. Samuel Jacobs, who was appointed to the board in 1888, became chairman on the death of Stock and held this position until 1937. With the formation of the company, the board immediately began to extend SABCo’s interests and purchased a brewery in Broken Hill, New South Wales in 1888; it was a profitable branch for over 30 years. SABCo also purchased the breweries in Port Augusta and Laura in 1893 but closed them in 1893 and 1898 respectively. The Port Augusta brewery was used as a depot for the distribution of SABCo’s beers in northern areas and later for the manufacture of aerated waters and cordials.

From the time of European settlement, all beer brewed in South Australia was top-fermented ale, porter and stout. These beers were unfiltered and unpasteurised and ale had a cloudy appearance due to the secondary fermentation in the bottle or cask. A major development by SABCo in the early 1900s was the installation of equipment for brewing lager beer. This was the first time in South Australia that this type of bottom-fermentation brewing was undertaken. Lager production requires refrigeration, pressurised beer tanks and cold cellars for storage. Initial interest in this new German-style beer, named Konig (‘King’) Lager, was not maintained as drinkers went back to their traditional ales and lager production declined. With the advent of World War One in 1914 SABCo changed the name to Adelaide Lager, but this failed to revive interest and brewing of lager virtually ceased. However, during 1912–14, Thomas Nation, SABCo’s head brewer, had developed an alternative beer. He used the normal wort and top-fermentation ale yeast, but fermentation and maturation was carried out in cold cellarage in the same way as lager. The beer was filtered and carbonated before bottling then pasteurised. This process made the beer clearer than the old ales and, labelled Bitter Beer, it proved to be more popular than lager. SABCo installed additional plant and increased production and over time the new beer gradually replaced traditional ale.

The main competitor of SABCo during the early twentieth century was the Walkerville Co-operative Brewing Co. Ltd. The Co-op moved from its small, inadequate brewery on Fuller Street, Walkerville to Torrenside Brewery, Thebarton in 1898 when the group purchased this bigger brewery which had been established by William and Thomas Ware in 1886. With a growing number of members, the Co-op developed the brewery and increased their trade. In the 1920s the Co-op board decided to brew lager beer and in 1926 the Nathan system, fully imported from Zurich, Switzerland was installed. As SABCo had found with their lager beer, the Co-op’s WB Lager was not popular and they introduced a bitter beer similar to West End’s.

The Great Depression of the 1930s, which resulted in considerable unemployment and hardship, inevitably led to a downturn in beer consumption and reduced profits in the industry. By 1938 Walkerville Co-op’s decline, following the unsuccessful lager venture, was the opportunity for SABCo to purchase the brewery at Thebarton. With this acquisition SABCo not only gained a brewery but also the trade of the many hotels supplied by Walkerville. With only Springfield Brewery Ltd at Mitcham and Coopers & Sons Ltd at Leabrook still operating, SABCo was the largest brewing enterprise in the state and supplied all hotels with bottled and draught beers.

SABCo brewed at both the West End and Thebarton breweries, renaming the latter ‘Nathan’: the beers produced there were labelled accordingly. During World War Two the federal government imposed a quota system on beer production with the ‘Control of Liquor Order’ which reduced beer sales through retail outlets to two-thirds of pre-war volumes; a percentage of production went to the armed services. Although the order was rescinded in 1946, shortages of materials – malt, hops, sugar and bottles – continued to plague the breweries. In 1948 (Sir) Roland Jacobs, son of Samuel Jacobs, was appointed to the board and became managing director; he was elected chairman in 1951 and retained this position until 1967.

From the early 1950s the situation regarding materials, both for brewing and building purposes, began to improve. The influx of migrants from all parts of war-torn Europe saw a surge in population and SABCo resumed plans for development to cope with an expected increase in production. In 1951 the Nathan Brewery’s name was changed – to Southwark – and the bottled and draught beers produced there were sold under the Southwark name. A major change came in 1955 when the board decided all bottling would be done at Southwark and West End would produce all bulk beer; this conversion was achieved by 1957. In this decade the company also sold older, less profitable public houses and built modern hotels in expanding suburbs. With the demise of Springfield in 1954, Cooper & Sons Ltd was the only other brewery in the state, but Coopers then only produced bottled traditional ale and stout and did not own or lease hotels. However, Coopers supplied all hotels, including SABCo’s tied houses, as their ale and stout were different from the major brewer’s products.

From this period until the 1980s SABCo continued to thrive, but the West End Brewery came to an end in 1980 when, with problems associated with traffic on Hindley Street and an aging and inefficient plant, it was decided all production would be done at Southwark. The West End site was sold and the complex demolished. In subsequent years SABCo diversified into areas other than brewing, with investments in maltings, wineries and packaging companies.

The tradition of painting the top of the tall chimney at the West End Brewery in the colours of the premiers and runners-up in the SA National Football League began in October 1954. Clarrie Cannon, a West Adelaide player and a West End employee, had the idea and on the morning of the painting Fos Williams, Port Adelaide’s captain-coach, suggested adding a red stripe for West Adelaide, the losing team, to the black band beneath Port’s colours. When that brewery closed, the unveiling ceremony moved to the Southwark Brewery where the annual ritual signifies the end of the local Australian Rules football season.

Another tradition began in 1959 – the annual display of Christmas decorations on the southern bank of the River Torrens below the brewery. Work on rehabilitating and beautifying the neglected river bank with landscaping and tree planting took more than a year, as did the construction of the large models and decorations for the display, many of which were made at the brewery. Many changes and additions have enhanced this first-class exhibition which is enjoyed by thousands of people over the Christmas period.

The most significant event after the centenary of the company in 1988 occurred in 1993 when Lion Nathan Ltd purchased SABCo. The brewery at Thebarton continues as part of the Lion Group, but is now known as West End, perpetuating the name given to the Hindley Street brewery in 1859.

This entry was commissioned by History SA. Uploaded 12 December 2013. 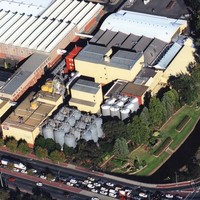 Associated with:
Breweries and beer