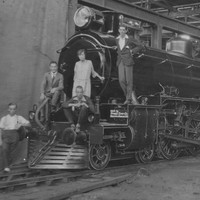 Samuel Perry (1865–1930), a Shropshire-born engineer moved his Adelaide workshop to Mile End in 1912 and from 1915–27 also owned a plant at Gawler to the north of Adelaide, which produced locomotives and rolling stock. During the Second World War, the firm took a major role in manufacturing munitions components and established a reputation as a defence manufacturer.

Expansion continued after the war, both at Mile End and at a new heavy steel fabricating plant at Whyalla on Eyre Peninsula. Merging with Johns and Waygood in 1966, during the 1980s and 1990s the company had several owners, including Boral and Pope Electrical, and became a non-core company in their portfolios. Much weakened, Perry’s continued producing significant components for engineering, mining and defence interests, but was placed in receivership in May 2000. 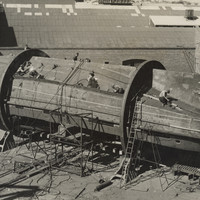 Image courtesy of the State Library of South Australia, SLSA: B 70617/1, Public Domain 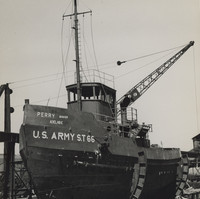 Image courtesy of the State Library of South Australia, SLSA: B 70617/2, Public Domain 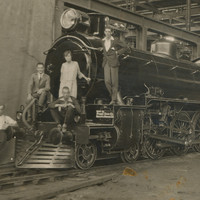 Image courtesy of the State Library of South Australia, SLSA: B 14460, Public Domain

Hi Martin - we can forward your details to David in case he does turn something up.

Hi David. If you find any mention of my grandfather during your research, please let me know. He was a machinist & driller in 1942, and later a Moulder in their foundry at Mile End I believe. His name was Edgar (Eddie) King.

Hi Roy,
Unfortunately the author of this article did not provide sources, but I know you can find more at the State Library of South Australia - https://catalog.slsa.sa.gov.au/record=b1961481 and that there are quite a few references to Perry Engineering if you search the newspapers in Trove - https://trove.nla.gov.au/ I hope that helps.

I'd be interested to know more about the writing of the history of Perry Engineering. I worked there from 1984 as an apprentice Boilermaker and left in 1997. I met my wife there and my father-in-law worked there his whole life. We still have monthly catch up lunches in the city with some of the ex-employees.

Shelley,
I am a professional engineer looking to write a history of Perry Engineering.
What happened to the photo album ? I am very interested.
Regards
David Jehan
Professional Engineer/Author

Dear Dr McKellar,
I am a professional engineer doing research into the manufacturing firms of James Martin/Perry Engineering.
I was interested in your comment on L.C.Leslie, he was chief designer at Perry's and designed many items including the highly successful series of steam locomotives built for sugar mills.
I am looking to write a history of this engineering organisation in the future and would be very interested in any information you can add to the story in regard to L.C.Leslie as he is pivotal to the story.
Regards
David Jehan
Professional Engineer/Author
Sydney

Again we don't hold anything here I'm afraid, but you may find some leads in the State Library of South Australia records: https://www.catalog.slsa.sa.gov.au/

My maternal grandfather, Leslie Cecil Leslie was an engineer at Perry's. Any information - stories, photos of Leslie, would be much appreciated. i have just returned from Adelaide and my mother's family home at Glenelg.

I'm not sure about that Kay, but I believe the State Library of South Australia holds some related records, which may give you further leads. You can search their catalogue online: https://www.catalog.slsa.sa.gov.au/

Cam across this photo of the Perry Engineering name on a ball mill at Adelaide Brighton Cement - may be good historical data.

Thanks for that generous offer Shelley,
I'll pass on your details to our acquisition committee.

I'm currently in possession of a photo album from the Perry Engineering Company Limited entitled "75' Steel Tugs 1944-5". It has a complete printed paper document outlining steel tug construction with reference to the photos. I acquired it back in the early 1980's and have decided that the album should be returned to South Australia if it proves to be of historical value. Anyway, if you are interested I can send you some images of the album cover, the first page of the document, and a shot of the photographic content so you can get a better idea of what this item is. If you are still interested after that, I can organise to get it down to you (I'm in Brisbane, QLD).