One of Australia’s great winemaking companies had its beginnings in 1844 with the arrival in South Australia of the English medical practitioner Christopher Rawson Penfold, his wife, Mary, and their daughter Georgina. In the tradition of doctors with a belief in the medicinal properties of wine, Penfold brought English and French vine cuttings which he planted on land in the village of Magill to the east of Adelaide, producing mainly fortified red wines.

Mary, assisted by their servant Ellen Timbrell, played an important role in the growth of the vineyard, especially after Christopher’s death in 1870. By 1881 Penfolds produced 486 432L of wine, one-third of South Australia’s total. Georgina’s husband, Thomas Hyland, oversaw expansion of the Penfolds company into Victoria in the 1880s, New South Wales in the early 1900s, and to McLaren Vale on the Fleurieu Peninsula and Nuriootpa in the Barossa Valley by 1911. In 1952 Max Schubert, chief winemaker at Magill, released the first Grange Hermitage vintage. Despite early criticism, it has come to be regarded as the greatest Australian red wine. In 1956 John Davoren, manager of Auldana Cellars (acquired in 1943), created a contrasting lighter unwooded red, St Henri Claret.

By the 1970s the company had become the nation’s largest wine producer. Family ownership continued until New South Wales brewer Tooth and Co. Ltd purchased Penfolds in 1976 following financial and management problems. The company’s Grange Hermitage has continued to grow in stature and as befits a legend it now attracts an international audience.

This is a revised version of an entry first published in The Wakefield Companion to South Australian History edited by Wilfrid Prest, Kerrie Round and Carol Fort (Adelaide: Wakefield Press, 2001). Revised by Bernard O’Neil with permission of the author. Uploaded 12 December 2013. 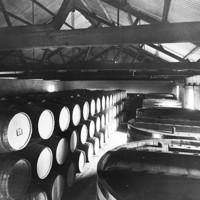 Penfolds winery with the city of Adelaide in the background, c.1900 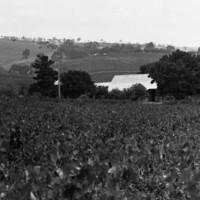 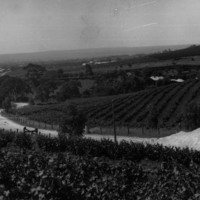 Bishop, Geoffrey C, The vineyards of Adelaide: A history of the grapegrowers and wine-makers of the Adelaide area (Blackwood: Linton Publications, 1977).