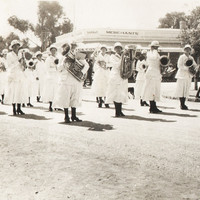 First welcome by BCLB at Burra Station of returning soldier

They played at the Cheer-Up Hut, in the street procession, at the memorial service and in the evening at the concert in the Exhibition Building. 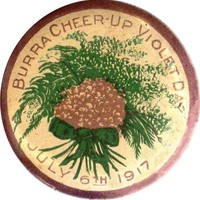 The BCLB participated in the festivities, providing entertainment.
1917

BCLB play at the Commercial Travellers' Day festivities in Adelaide

Marched and performed on a platform in Rundle Street
1918

A large crowd gathered in Market Square when news reached Burra that Germany had offered to accept peace terms. Amongst speeches, the BCLB provided musical entertainment in combination with the Men's Band (who had apparently been able to reform by mid-1918 when sufficient able men returned from war). 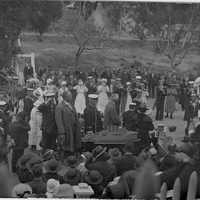 The BCLB was joined by the Navy Band and performed selections.
c. 1919

The BCLB were the main band for the ceremonies, playing at the Anzac Arch and in a parade to Bowman's Building. At this event the girls also received service badges, which comprised a pair of wings in blue on a white background and a stripe for each year of service.
1920

Final performance of the BCLB

The band marked its dissolution with a social evening in St Mary's Parish Hall, in Burra.

In May 1915, the South Australian Cheer-up Society established its Burra Branch, to grant local departing soldiers an adequate and social send-off to the Great War. While this branch, in and of itself, greatly influenced South Australian history, one of their more significant enterprises was the foundation of the Burra Cheer-up Ladies’ Band (BCLB).

Formation of the BCLB

The BCLB was formed in 1916 as a replacement for the Burra Coronation Band (BCB), which had dissolved that same year due to approximately sixteen of its members enlisting. According to newspapers, on Tuesday 7 November 1916, the Burra Cheer-up Society met to formally establish the band, to ‘render assistance at all [of Burra’s] patriotic gatherings’, including welcoming returning soldiers at the local train station. Resident music teacher, Mr James ‘Jim’ Bentley - cousin to Miss Beatrice ‘Trix’ Pearce, Hon. Secretary of the Burra Cheer-up Society and band organiser – was recruited as the ensemble’s conductor, a gargantuan task considering many of the women could not read music or were unfamiliar with the instruments they intended to play. While the list of members present at the band’s formation is unknown, according to Eric Fuss of the Burra History Group, a Burra Record newspaper for March 1917 states the band consisted of:

Another photo from the Burra History Group, dated as 1914 - even though newspaper records and an article by Trix Pearce’s nephew infer the BCLB and Burra Cheer-up Society did not exist at that stage - details a much larger group:

The band’s first rehearsal was on 9 November 1916, having been given permission by the Town Council to use the BCB’s instruments. However, the BCLB’s beginning proved troublesome, as ‘the majority of the instruments, refused to do what was required of them, and [the band] had to retire beaten’ until new instruments could be purchased through subscriptions and donations; funds repeatedly asked for through the Burra Record. According to the Burra Cheer-up Society’s Annual Report, by June 1917 the BCLB possessed new equipment in the form of seven cornets, four tenor horns, two baritones, one euphonium, twelve music stands, and four acetylene gas lamps.

The BCLB’s first public appearance was on 19 February 1917, at the Exhibition Concert Party, after which point they rapidly gained renown as a proficient musical group. While their primary role was welcoming returning soldiers, a task they completed over 175 times, the band received ‘invitations to play at functions in Adelaide and in country towns… more often than could be accommodated’. As such the band played at many events of varying importance throughout 1917, 1918 and 1919, including Anzac Day celebrations, Violet Days, local shows, Navy Day, Red Cross events, and Australia Day festivals.

The intention had been to disband the group and the Burra Cheer-up Society branch when the last Burra soldier came home; Walter Lee on the 15 March 1920. However, in July 1920 the BCLB was asked to participate in the Royal Visit and Reception of the Prince of Wales to South Australia; their penultimate musical performance before officially dissolving at a social evening at St Mary’s Parish Hall in early August 1920. The royal reception took place at the Adelaide Town Hall, where ‘a platform, prettily decorated with wattle foliage, had been erected’ for them to play on, alternating with the Glenelg Band who had also been asked to play at the event. The festivities progressed well until:

‘…just as the Prince was stepping from his car, an overzealous camera fiend mounted on the frail protection overhead and a crowd… rushed the platform (made to carry 30 people) and the consequence was that the whole structure collapsed with a crash just as the last note of “God Bless the Prince of Wales” was reached.’

Despite this disaster, none of the girls nor their instruments appeared to be seriously injured and they ‘pulled themselves together, quickly enough in fact to witness the civic welcome and the presentation of the address’. Later, having been so pleased with their work and commitment, the Prince requested that Trix Pearce be presented to him. After asking certain questions about the group’s history he and Pearce shook hands and then he congratulated her on the band’s splendid accomplishment. Thereafter the band's members dispersed, though ‘there could hardly have been a more brilliant finale’. Considering that, like the majority of the people, Conductor Bentley thought the girls were joking when they first proposed the band to him, it is testament to the ensemble’s persistence and talent ‘that their last public appearance would be made so memorable with words of approbation, personally spoken by His Royal Highness the Prince of Wales’. 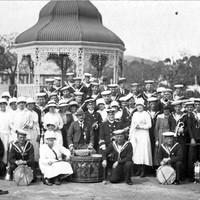