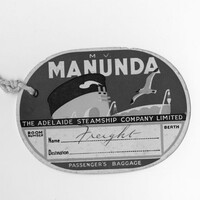 Registered as a company 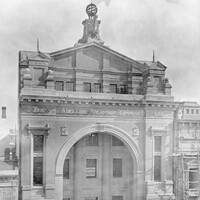 A sculpture of a ship's prow, symbol of the company, topped the building.
1964

In 1964 the company merged with McIlwraith McEacharn Ltd to form Associated Steamships Ltd.
1986

The building which housed the offices of the Adelaide Steamship Company was demolished to make way for the atrium of the State Bank.

The Adelaide Steamship Company was Australia’s largest shipping company and one of South Australia’s most successful business ventures. Founded in 1875 the company can trace its history through the themes of colonial enterprise, wartime and defence, work and culture, cruising and pleasure. Wool, wheat and minerals were making South Australia rich in the 19th century. Cargoes were booming but South Australian shipping was frustrated by small companies and inter-colonial rivals. In 1875 a group of savvy pastoralists and businessmen took action. They aimed to control the transport of their goods and profit via an efficient passenger vessel service.

For more than 100 years the company’s fleet dominated Australian passenger and cargo shipping from Darwin to Townsville. The Company employed nearly 800 people at sea and about 90 onshore. Office managers were expected to work as required to keep ships moving and profitable. While there was great loyalty from some workers, there were also major waterside disputes during the 1890s and 1920s. In wartime the company’s vessels were requisitioned for global campaigns and in peace they offered Australians the journey of a lifetime.

For over 50 years from 1910 to the 1960s the Gulf Trip on Adelaide Steamship vessels was a unique way to see South Australia. Popular with honeymooners and notorious party ships for young men, the seven-day trip cost £6 in 1939. Ships like the Minnipa, Manunda, Moonta and Morialta provided an opportunity for romance and gave many Australians the time of their lives. Luxury was also offered to passengers on the interstate trade. In 1933 Manoora showcased the latest in streamline design.

During the twentieth century the Adelaide Steamship Company diversified creating other businesses including Adelaide Airways Ltd, Adelaide Ship Construction Ltd and tugboat operations. Expansion extended to shares in interstate shipping and other companies. In 1964 the company merged with McIlwraith McEacharn Ltd to form Associated Steamships Ltd. 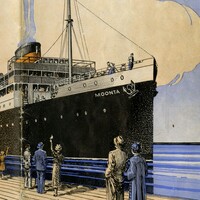 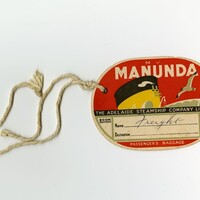 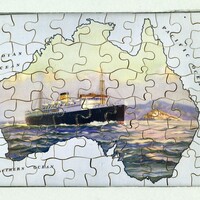 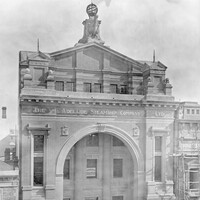 Hi Rob,
As noted in the previous comment the History Trust holds some general ephemera related to the Adelaide Steamship Company but no specific staff records https://collections.history.sa.gov.au/nodes/view/4722

If you're trying to track down birth and death records and having trouble you might try getting in touch with Genealogy SA, who have extensive databases and experienced family history researchers - https://www.genealogysa.org.au/

Best of luck with your research,

Hi Catherine,
I am trying to find information on my great grandfather George Irvine. He worked as a captain with the Adelaide steamship company for quite some time and supposedly commanded/was the captain of many of their ships; Manunda, Morialta, Manoora, Alinga, Innamincka, Grantala, Mundulla, Baldina, Tarcoola and Dilkera. During the first war, he delivered one of the company's ship (Grantala) to its new owner in France. He joined to RNR and later royal Navy in England during ww1 and served with the royal navy's Q ships (Q 22- The Gaelic). He was awarded the DSO for sinking a German submarine. And was a part of the Ancient Mariners League-a type of club.
I was wondering if you know whether there are records concerning him, as I am having trouble finding more specific information related to him.-Particularly information regarding his parents and birth date/place. Most of the info I found was actually through Trove!
Any records relating to him would be much appreciated.
Kind regards,
Rob

Hi Helen,
The records in the History Trust collections tend to be ephemera and souvenirs, or direct donations from families, we don't hold many official staff records as these are held in archives.

The bulk of the Adelaide Steamship Company records have now been sent to the Noel Butlin Archives - https://archives.anu.edu.au/collections/noel-butlin-archives-centre

There are also some records at State Library of South Australia - https://collections.slsa.sa.gov.au/resource/BRG+112

I hope this helps in your search.

My Grandfather, Robert Campbell, he was employed as the gangway watchman on the vessel, Dilga, which was unloading a shipment of Tasmanian potatoes. When he slipped & fell between the side of the vessel & the wharf, & was killed on the 22nd July 1950.
Do you have any more information on him, where he was living at the time of employment? - a photo? - anything at all.
Thank you

Hi Philip,
The bulk of the Adelaide Steamship Company records have now been sent to the Noel Butlin Archives - https://archives.anu.edu.au/collections/noel-butlin-archives-centre

There are also some records at State Library of South Australia - https://collections.slsa.sa.gov.au/resource/BRG+112

I will get in touch with the curators at the South Australian Maritime Museum and see if they can help further.

I am looking for information on William Alfred Waller, he was a ships master on the following company vessels the: Noora - Aldinga and the Dundula during WWII 1940 - 1944.
I would appreciate and information of Williams service with the Adelaide Steamship company during those years and his retirement.

Hi Ashleigh, It's not something we have a lot of information on, but I can suggest some places to try.

All History Trust positions are advertised on the I Work for SA website - https://iworkfor.sa.gov.au/

Hi. I'm enquiring about the tug boat Faidherbe that sank in October 1955. James Vernon Hewson was one of the lost 14 hands on the ship. my father was Vernons brother and I would like to try and trace details of the ship and any historical information. Would it be possible to put me in touch with anyone who could help me? Kind regards
Ashleigh.

Thanks for sharing that information Lydia, I had no idea!

A french association to preserve the last ship of this australian society, failed in a beach in France: The Lydia ex MV Moonta:
lydia-moonta.fr
Facebook page: Lydia Moonta

Hi Michael,
most of the South Australian Maritime Museum collection related to the Adelaide Steamship Company are memorabilia, such as ship fittings, rather than official records. A search for Samuel in the catalogue does not return any records, however a bit more digging might reveal documents of the right era for his time with the company. I can e-mail you a bit more if you are wanting to follow up.

Hi, my great grandfather Samuel Milligan Nelson was the Adelaide Steam Ship Company Chief Stevedore at Port Pirie from about 1898. Is it likely there are any records from that period. Many thanks Mike

Hi Robert,
I've searched our catalogues and can't find anything I'm afraid. It might be worth contacting the South Australian Maritime Museum and asking the curators there if they have any ideas where else to look - https://maritime.history.sa.gov.au/contact/

im trying to find a photo of the sea ripple which was owned by Adelaide Steamship Co , in the 1800 which was later wreaked in onslow as my wife has a family connection to the sea ripple

hope you can help

The State Library has quite a few records, and photos, from the company Scharyn. https://encore.slsa.sa.gov.au/iii/encore/search/C__SAdelaide%20Steamship... Are you looking for anyone in particular?

Are you able to associate early SA People with these businesses?

Hi
I've got my grandfather's certificate of discharge papers. He was on the manunda in 1937- 1939 when he signed up for ww2

Hi Kent, I'm afraid we don't hold those records. I would suggest the best place to start looking is the State Library of South Australia http://www.slsa.sa.gov.au Quite a lot comes up in a catalogue search on the Adelaide Steamship Company and one of those sources, such as the research notes they hold, may point you in the direction of the employment records. I'll check with the South Australian Maritime Museum curators to see if they have any other ideas.

Hi I am enquiring as to whether you would have employment records for my Grandfather John Thomson who was a deckhand on the ship Manunda during ww2. employed by the Adelaide Steamship Co. HE WAS ON BOARD THE SHIP WHEN IT WAS BOMBED IN Darwin. Hope you are able to help me. Regards Kent.