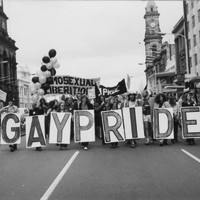 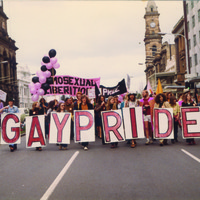 South Australia's first gay pride march, the 'Proud Parade', is held in Adelaide. The next occurs 30 years later in 2003, when the Adelaide Pride March opens the city's annual Feast Festival.

WHO EVER THOUGHT ADELAIDE COULD TAKE IT?

So blazoned the headline in the pictorial ‘centrefold’ of Adelaide University student newspaper On Dit.  To what was it referring? On Saturday 15th September 1973 Adelaide witnessed an event never seen before on its streets in all its 136 year history.  It was the parade of 100 or so young people led by eight of their company each carrying a large pink beglittered letter which collectively spelled GAY PRIDE.

GAY PRIDE, what did it mean?  There followed a large pink banner with the words HOMOSEXUAL LIBERATION in bold black capital letters.  Yes, it was a group of youthful homosexual men and women, their friends and supporters, who had ‘taken to the streets’ to proclaim homosexual/gay pride.  It was the PROUD PARADE, Adelaide’s very first Gay Pride March organised by Gay Activists Alliance Adelaide.

The Proud Parade was Adelaide’s climax of Gay Pride Week, a week of activities, celebratory and political, held across the country in Adelaide, Brisbane, Sydney and Melbourne.  At this time most Australians would have associated the word GAY with ‘having or showing a joyous mood’.  The country received an education that week as it learned that young radical homosexual men and women were using it to describe themselves, with a sense of pride and celebration.

The parade began in Victoria Square, proceeded down King William, Grenfell, Pulteney and Rundle Streets and concluded with a Speak Out in the Parklands adjacent to the Torrens Parade Grounds.  Pink and black flags, banners and balloons made for a colourful spectacle.  Flags depicted a pink triangle, the symbol that homosexual men were forced to wear in Nazi concentration camps, and adopted as a prominent international totem by the early gay liberation movement.

The tone of the march was celebratory with singing and chanting:

ONE IN TWENTY OF YOU IS ONE OF US.

The ‘anthem’ of the day, sung to the tune of The Teddy Bears Picnic, was rendered fulsomely by some marchers:

For every gay that ever there was

Is out on the street today because

Today’s the day that all the gays are marching.

Singing, dancing and having fun because we’re proud to say we’re gay.

Rundle Street, not yet a mall, was abuzz with Saturday morning shoppers and marchers reported a sense of exhilaration as they proceeded down it.  After the Parklands Speak Out small groups went back into Rundle Street singing, dancing and chanting; in and out of stores, up and down escalators and mingling happily with the Saturday morning shoppers.  Some intrepid liberationists even held a same-sex ‘love-in’ in David Jones bed department!

Male homosexuality was still criminalised in South Australia at that time and ignorance, fear, even hostility, were prevailing attitudes.  Only the year before Adelaide University law lecturer Dr George Duncan had been thrown into the River Torrens and drowned because his attackers believed him to be homosexual.  The very idea of expressing pride in being homosexual was new and novel.

How was such a public manifestation received?  The October edition of Boiled Sweets, the Gay Activists Alliance magazine, reported that “apart from the throwing of two eggs, Adelaide shoppers were very well behaved”.  It rated Gay Pride Week “happy, colourful and peaceful” and concluded: “..if it has made straight society more aware that we exist, and refuse to be politely invisible, then indeed GPW (Gay Pride Week) must have been successful”. 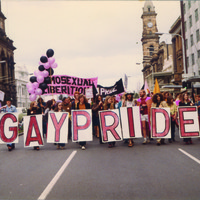