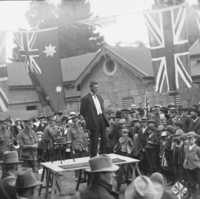 Two failed referendums on the issue of conscription meant that war service in the Australian Imperial Force (AIF) depended on volunteers. Prime Minister WM Hughes favoured conscription, but South Australia joined New South Wales, Victoria and Queensland in voting ‘no’ to the proposal in referenda held in 1916 and 1917. These votes produced the necessary majority for enlistment to remain voluntary. Recruitment drives following the failure of the second referendum produced a temporary increase in recruits, but the referenda themselves proved divisive and counterproductive. In 1918 enlistments were well below target.

War spawned another division. People of German descent were more numerous in South Australia than in any other Australian state. The census of 1911 showed that 26 281 South Australians – almost 7% of the population – were Lutherans. Of foreign-born residents, 4977 had been born in Germany. Following a 1914 British government order, the Australian government required the states to intern people of German or ‘enemy’ origin. In South Australia (the 4th Military District) an internment camp was established on Torrens Island, near the Port River at Port Adelaide.

Despite decades of peaceful interaction between South Australians of German and non-German origin, promoting any aspect of German culture was forbidden during the war. The German-language newspaper Süd Australische Zeitung, published continuously since 1850, was banned. The 52 schools in South Australia using German as the main language of instruction were closed. The Nomenclature Act 1917 changed 69 German placenames and forbade the use of a previous German placename in a residential address or legal document.

From August 1914 South Australia’s volunteers at home swung into action. Sandbag sewing and other voluntary work was carried out by bodies such as the Red Cross, the Young Women’s Christian Association, the Salvation Army, the League of Loyal Women and the Fighting Forces Comfort Fund. Fifty thousand fly-nets were made for horses in the Palestine campaign by South Australian school children, whose Patriotic Fund also raised £85 000.

On the economic front, mining activity increased during the war despite a commonwealth ban on the export of metal to prevent it falling into enemy hands. To meet home demand, the smelting works at Port Pirie in the Mid North expanded, with the Port Pirie Smelters being taken over by the Broken Hill Associated Smelters in 1915. When in 1917 the federal government banned car body imports, Adelaide firms, particularly Holden’s, seized the opportunity and went into production.

On balance, however, South Australia did not prosper between 1914 and 1918. The state was devastated by drought in 1914, with huge losses of stock and a disastrous grain harvest. A better season in 1915 meant welcome exports to Britain, albeit hampered by a shortage of ships to carry the grain. With their government fighting to balance the budget, South Australians were taxed more heavily than residents in any other state.

The federal government’s soldier settlement schemes following the armistice in November 1918 promised hope to South Australia’s returning soldiers in re-adjusting to civilian life. Six million pounds was spent on establishing blocks in the state’s Riverland, with over 1100 men settling in the area. Dryland blocks were also available, but life was often hard and many failed. Another government project aimed at assisting the returned men, in this case to obtain housing amidst a post-war housing shortage, was the ‘Thousand Homes’ scheme in which 400 new homes were built on the site of the Mitcham army camp. Colonel Light Gardens was completed in the 1920s. These schemes would not, of course, be the final chapter in the story of soldier settlement in South Australia.

With the loss of more than 5000 of its young citizens, and with the heavy taxes imposed on its population, the war had been hard for South Australia. In the 1920s, however, the state’s industrial and manufacturing sectors expanded, and until stymied by the Great Depression South Australia made modest progress in the wake of the ‘war to end all wars’.

This is a revised version of an entry first published in The Wakefield companion to South Australian history, edited by Wilfrid Prest, Kerrie Round and Carol Fort (Adelaide: Wakefield Press, 2001). Revised by the author and edited lightly. Uploaded 8 April 2014. 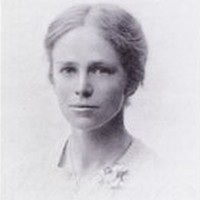 In researching First World War knitting I came across the story of Clara Bartholomaeus, the secretary of the Soldiers Aid Society in Burra during the war. 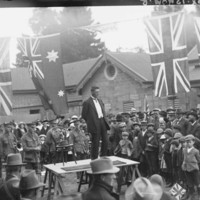 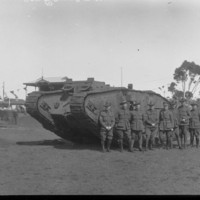 Gibbs, RM, A history of South Australia: from colonial days to the present (Adelaide: Southern Heritage, 1999)

Associated with:
Pictures from the past