In June 1871 the topic of balloon flight was on everyone’s lips in Adelaide after Thomas Gale (1841–84), an American aeronaut, announced his intention of ascending in his ‘machine’ called the ‘Young Australian’ at 4pm on Tuesday the 20th – the anniversary of Queen Victoria’s ascension to the throne. After a failed attempt, Gale achieved his feat four days later.

Gale proposed first to ascend from the grounds of the Exhibition Building, North Terrace. The Southern Argus reported that on 20 June ‘the Park Lands and every available spot in the neighbourhood of the balloon, and from which a view of the ascent could be obtained, was besieged with human beings’. The crowd was estimated to be up to 20 000, about 500 of whom had purchased tickets to watch the feat close up. However, after more than seven hours of filling with gas, the balloon was still only half inflated and refused to float. Tickets were returned to those who had bought them, while ‘the public outside, who had been waiting in great expectancy for some hours, regarded themselves as having been considerably sold [duped]. Of course everybody was disappointed if not disgusted’, said that newspaper.

Gale announced that the reason for the failure was that the gas pipe was too narrow, so it was proposed that he would make a second attempt on the Saturday, using a thicker pipe. The South Australian Gas Company’s offer to supply this thicker main at the cattle yards at the western end of North Terrace opposite the Newmarket Hotel was accepted. By 2pm on the day, ‘several hundred spectators had paid for admission within the enclosure, and several thousand assembled on North Terrace and the adjoining Park Lands to witness the ascent. Schrader's band was in attendance, discoursing at intervals most excellent music’, recorded the South Australian Register.

While they waited for enough wind for the flight, the balloon ‘gave a lift’ to 30 or 40 people, one or two at a time, to the height of the 60m tether rope. Among those who thus ventured 'up above the world so high' was a young lady named Lavinia Balford, of Parkside, who gained the honour of being the first female to ascend in a balloon in South Australia, reported the Register.

After these partial ascents, the full flight took place at 4.15. Gale’s companion on the flight was theatre owner and impresario Samuel Lazar, later a mayor of Adelaide. Lazar attempted to entice his dog into the basket, but the dog refused. The Register report said that when released the balloon flew towards an opening in the clouds that seemed to have been specially made for its reception. As the balloon passed along the ‘stainless calm cerulean of heaven’ it looked to be almost stationary and then gradually got smaller. In about 30 minutes it ceased to be visible from Adelaide.

A pleasant and light sensation

Lazar wrote in the Register that during the flight he ‘experienced not the slightest feeling of sickness or giddiness, but rather a pleasant and light sensation … The balloon does not revolve, but feels entirely stationary; the earth and all objects below seem to be receding’. He threw out several copies of the Register to mark their route. At the end of the flight the basket touched down in a landing as soft ‘as if it had been let down from a crane’. Their final location was near Thorndon Park Reservoir, and locals rushed to help detach the basket and fold up the balloon. Lazar was very impressed by his experience, and wrote that anyone who had ‘a taste for the sublime and beautiful could not do better than take an aerial trip with Mr Gale’.

Over the next few weeks Thomas Gale took many more passengers up in ‘Young Australian’, including dignitaries and members of the press. Gale’s aerial ascent opened the way for many similar events to take place in Adelaide’s Park Lands. Within ten years there were a multitude of balloonists, with athletes making parachute jumps from the baskets, high wire acts and other feats of daring in flight. Gale settled in Adelaide and married his female aeronaut, Lavinia, at Christmas 1871. They lived in Parkside for the rest of his life. 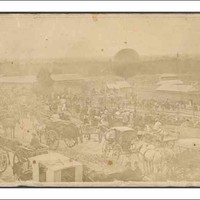 Image courtesy of the State Library of South Australia, SLSA: B13519, Public domain