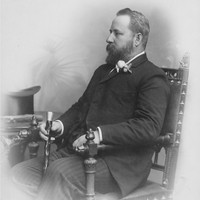 First Proprosals for Federation Made

When the first proposals for federation were made, South Australia strongly opposed it fearing incompatibility between states.
1863

Realising the need for duty-free trade access to the eastern states, South Australia initiated the first significant intercolonial conference in 1863.
1890

South Australian leaders played a prominent role from the time of the Melbourne Constitutional Conference to the accomplishment of Federation.
1891

Charles Cameron Kingston and Thomas Playford advocate the 'Compromise of 1891'

Without the Compromise of 1891, the larger colonies would not have accepted a senate composed of equal numbers of representatives in the states.
1891

This extended to federal elections, and the preservation of voting rights of Aboriginal peoples.
1895

Strongly encouraged by Kingston, Reid calls a conference of premiers to authorise a new convention of directly elected delegates.
1897 - 1898

Thoroughly interested in interstate trade, Gordon was instrumental in advocating for an interstate commission to enforce the Commonwealth's trade power and adjudicate disputes.
1897 - 1898

The South Australian delegation often acted as a broker between the biggest and the smallest two colonies. 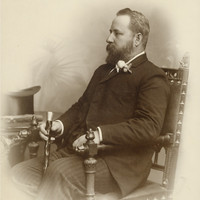 Kingston among delegation to steer bill through British parliament

Kingston's involvement was crucial in keeping British changes to the bill to a minimum.
1901

Eight of the South Australian delegates entered the national parliament.

Throughout the 1890s South Australia was at the forefront of the Federation movement that created the Commonwealth of Australia from six British colonies. Strong support across factional boundaries saw colonial leaders working powerfully together in the cause. They provided articulate and influential delegates to the national constitutional conventions. In the community a vigorous campaign ensured that at two referendums both men and women in South Australia voted overwhelmingly in favour of Federation, 67.4 per cent and 79.5 per cent respectively, the third-highest votes, next to Tasmania and Victoria.

This had not always been the case. When the first proposals for Federation were made in the 1840s and 1850s, South Australia was the strongest opponent. Opposition was based on the supposed incompatibility between freely settled South Australia and the convict taint of the other colonies. There was also fear that South Australia would either be devoured by New South Wales or become a mere outstation of Victoria.

By the 1860s South Australia was more conscious of the need for duty-free trade access to her eastern neighbours, was developing commercial links with Western Australia, and had acquired administrative responsibility for the Northern Territory. South Australia initiated the first significant intercolonial conference in 1863, and was an extremely active participant in each of the subsequent 11 major intercolonial conferences to 1890. The Federal Council of Australasia was established in 1886 as a way of ensuring a national approach on a number of issues without compromising the participants’ sovereignty. Here South Australia, like New South Wales, was more equivocal, joining for only two years on a trial basis (1889–90).

The economic depression of the late 1880s and 1890s exposed the colony’s vulnerability and acted as a spur to Federation. Its agricultural base made intercolonial free trade and imperial preference vital to continued survival. As the end-user of the Murray–Darling river system, South Australia recognised that issues of water quantity and irrigation could only be solved by national management of upstream waters. A federal government alone would have the means to build railway links to the west and north, standardising the gauge as it did so. Only a federal government could relieve South Australia of the financial burden of the Northern Territory’s development. Federation would facilitate the servicing and supply of Broken Hill just over the eastern colonial border and the newly discovered Western Australian goldfields. Its central location could then be truly turned to advantage.

So it is not surprising that South Australian leaders played such a prominent role from the time of the Melbourne Constitutional Conference in 1890 until Federation was accomplished in 1901. Pre-eminent among them was Charles Cameron Kingston, who drafted a Constitution for circulation before the 1891 convention in Sydney and took a leading role there. In concert with Thomas Playford, he advocated the ‘Compromise of 1891’ on the handling of financial bills in the federal parliament, without which the big colonies would not have accepted a senate comprised of equal numbers of representatives of the states. When progress stalled, Kingston, by then premier of South Australia, was instrumental in getting New South Wales’s George Reid to call a conference of premiers to Hobart in 1895 to authorise a new convention of directly elected delegates, whose work would then be submitted to the electors for endorsement by referendum, thus by-passing the intransigent colonial parliaments. Kingston, having contrived to hold the first 1897 session of the convention in Adelaide, became its president. His vigorous support for a democratic constitution and his advocacy of conciliation and arbitration powers helped garner support from the sceptical Labor movement in the subsequent referendums. Kingston was among the delegation sent to London in 1900 to steer the bill through the British parliament. His unyielding refusal to see the ‘peoples’’ bill interfered with was critical in keeping proposed British changes to a minimum.

All the other South Australian delegates made their mark on the constitution and advanced the cause. In 1891 John Cockburn supported universal adult suffrage for all elections to federal parliament, including preservation of the voting rights of Aboriginal peoples. John Downer was a strong advocate of equal power for the senate, and opposed an elected governor-general on the grounds that this would detract from his constitutional and ceremonial role. John Gordon had a great interest in interstate trade, the River Murray and railways. In both 1891 and 1897–98 he successfully advocated an interstate commission to enforce the Commonwealth’s trade and commerce power and adjudicate on disputes over trade, river commerce and railways.

At the 1897–98 convention the South Australian delegation often acted as a broker between the biggest and the smallest two colonies. Alfred Deakin of Victoria observed that ‘measured on all round ability the SA delegation was undoubtedly the strongest’ (The Federal Story, p. 59), and Bernhard Wise of New South Wales asserted that the first feature of the convention was ‘the immense superiority of the SA delegation over that from any other colony’ (The Making of the Commonwealth, p. 236).

All South Australian delegates made significant speeches and committee contributions to key clauses of the Constitution. Richard Baker became the chairman of committees; his Manual of Reference comparing other federal systems was influential, while Downer was a member of the three-man drafting committee with Barton and O’Connor of New South Wales. The familiarity of the South Australians with deadlocks between the houses, with the use of a referendum to gauge public opinion on controversial matters, and with the women’s franchise and its impact on voting patterns, influenced all aspects of the convention proceedings.

Of the new delegates in 1897, all well-known and experienced politicians, Josiah Symon was chairman of the Judiciary Committee, which devised the High Court of Australia and insisted on it being the final court of appeal without recourse to the Privy Council in Britain. Frederick Holder, an innovative and successful colonial treasurer, was author of a number of the financial clauses. James Howe made his mark through his battle to empower the Commonwealth to provide invalid and old age pensions. Patrick McMahon Glynn is best known for his equally long battle to insert a reference to God in the preamble to the Constitution, and his role in the River Murray debates. Vaiben Solomon, the Northern Territory representative in the South Australian parliament, joined debate on many issues, including the defence power, deadlocks between houses and altering the Constitution.

An active popular movement in South Australia including the Australian Natives Association and the Commonwealth League strongly campaigned for the federal cause. Women had the vote and the right to stand for office in South Australia, and Catherine Helen Spence stood unsuccessfully but with great public impact as a delegate for the Convention. During the referendum campaigns women were welcomed at all meetings, unlike one instance in New South Wales when Edmund Barton banned them. Organisations such as the Woman’s Christian Temperance Union played a key role by raising the profile and temperature of the campaign.

Conservatives such as Baker and Downer thought the senate would provide a safety barrier from socialistic excesses, while progressive radicals like Kingston saw the national parliament as a way to transfer the benefits of universal suffrage and popular democracy throughout the nation. But they shared a vision of South Australia as an important part of a new nation contributing to society in ways that would make Australia the envy of the world.

In 1901 eight of the delegates entered the national parliament. Kingston became a member of Barton’s ministry, Holder the first Speaker of the House, Baker, first President of the Senate, and three others were subsequently Commonwealth ministers. The South Australian Clerk of Parliaments and chief administrator of the Convention, Edwin Blackmore, became the first Clerk of the Senate. Thus South Australia’s influence was appropriately transferred to the national level.

While after World War I in a number of areas the promise of advantage under the Commonwealth was not fulfilled, in particular with regard to the railway network and regulation of the River Murray, South Australia benefited from the Commonwealth’s placement of World War II industries and the post-war immigration program, and overall has done well from fiscal equalisation under Federation.

This entry was first published in The Wakefield companion to South Australian history edited by Wilfrid Prest, Kerrie Round and Carol Fort (Adelaide: Wakefield Press, 2001). Edited lightly and references updated. Uploaded 27 May 2015. 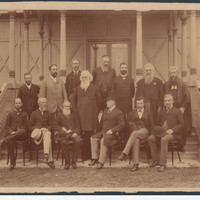 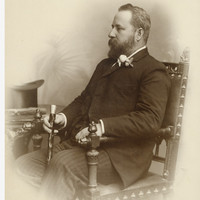 J.A. La Nauze, The Making of the Australian Constitution (Melbourne, 1972)