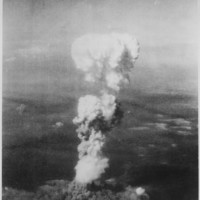 In the dying days of the Second World War, a war-weary United States dropped its atomic bomb, nick-named ‘Little Boy’, on Hiroshima. The date was 6 August 1945. Three days later a second bomb was detonated over Nagasaki. The US hoped to persuade the Japanese government to surrender and avoid a long series of battles in the Pacific. The Japanese government did surrender on 15 August.  The precise number who died as a result of the explosions cannot be known with certainty, but it is estimated that between 130,00 and 240,00 died within the first few months.  It was death and destruction on such a terrible scale that it remains the first and only use of nuclear bombs in warfare.

People around the world read accounts of the devastation with horror.  Debate about the ethical justification for the use of the bombs began immediately and has continued ever since, including here in South Australia.  While everyone greeted the end of the war with profound relief, most were shocked at the price exacted from the Japanese people.

Local  South Australian newspaper commentary at the time ran headings such as 'The Mighty Atom' along with some estimates of the impact on Adelaide of such a weapon. There were also some who were prepared to write expressing their disapproval of the action, even at this time in the midst of war. 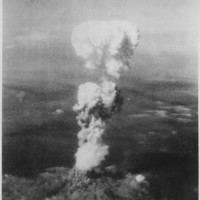 Associated with:
The Second World War