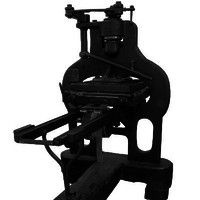 The printing press used to print the Proclamation of South Australia.

The Stanhope press, was brought ashore to Holdfast Bay in 1836 from aboard the Africaine. It was installed in a tent at Glenelg and used to print the first one hundred copies of the Proclamation of South Australia as a British province. It was subsequently moved to Adelaide and used in printing official Government documents. The press was used by Robert Thomas and George Stevenson, Government printers and proprietors of the South Australian Gazette and Colonial Register. It was later donated to the Art Gallery of South Australia by Thomas' descendants Edward Kyffin and Geoffrey Thomas in 1929. The press was then transferred to the History Trust of South Australia.

A large cast-iron printing press formed in one piece and mounted on a heavy t-shaped wooden base. A large screw extends from a nut at the top to a point that connects with a slider to a groove fitted in between two vertical arms of the frame. It is driven by three leather straps beneath the slider. The slider has a heavy platen attached to its lower end and the weight of the platen and slider are counter clanced by a heavy weight at the back of the press. The upper front of the press is stamped with 'Stanhope/Invent'. Below is written 'No 200'. On the right front arm beneath a wooden block believed to have been added later is stamped with 'Walker/fecit'. It is believed these marks identify this as one of the early Stanhope Presses as invented by Lord Stanhope in 1800. 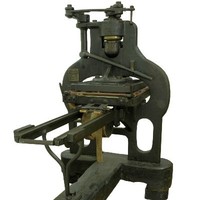