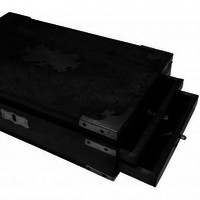 A wooden paint box, believed to have belonged to Captain Charles Sturt.

This paint box is believed to have belonged to soldier, public servant and explorer, Captain Charles Sturt. Sturt first arrived in Australia in 1827 as a Captain in charge of a regiment guarding convicts in New South Wales. He was made Military Secretary to Governor Darling, who approved Sturt's expeditions into the interior of Australia. Sturt followed the westward-flowing rivers of New South Wales to the River Darling and then the River Murray. He traced the Murray through South Australia, following it to its mouth. In 1833 he published his observations, including his watercolours of the landscape, in a book entitled Two Expeditions into the Interior of Southern Australia in the Years 1828, 1829, 1830, and 1831.

The paint box was part of the Historical Relics Collection, before being transferred to the History Trust of South Australia, now History SA.

Sturt's watercolours and sketches offer an insight into early European explorers' impressions of the South Australian landscape. Prior to the use of photography, watercolours and drawings were only way to convey visual information about the hitherto unknown landscapes of the South Australian interior. These kinds of images were of particular importance to prospective colonists interested in the possibilities of this land as a new site for European settlement. Based on what he read in Sturt's book, Edward Gibbon Wakefield chose South Australia as the site for his new colony.

A rectangular wooden box, possibly mahogany. Lid and base are secured by two hinges at the back, which attached by six screws. Brass locking mechanism on the front has no key. The outer lid of the box has scrolled brass corners and a centrepiece with a lift-up handle. All brass is inset and screwed down. Interior is lined with blue velvet. Far left side has three deep compartments and the remaining area holds a shallow tray divided into a number of compartments by wooden dividers, also lined with blue velvet. Beneath the shallow tray with access from the outer right of the box are two full width drawers with a small round hole cut into them to allow the drawers to be pulled out. 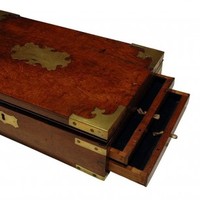 This paint box is believed to be the one used by Sturt as he documented the River Murray in watercolours.
Courtesy of/Photographer:Rachel Harris, Bit Scribbly Design 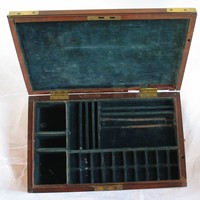