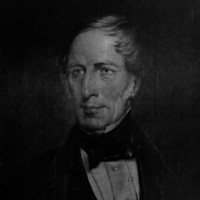 Charles Napier Sturt was born in Bengal, India, on 28th April 1795, the son of judge Thomas Napier Lennox Sturt. He was sent to England at the age of four for schooling and did not see his parents for another ten years. In September 1813 he obtained an ensigncy in the 39th Regiment through his aunt’s influence, was promoted to lieutenant in 1823 and to captain in 1825. Subsequently, the regiment was posted to New South Wales, arriving in May 1827.

His appointment as Private and Military Secretary to Governor Darling was the turning point of his career. In 1828-29 he led an expedition to trace the Macquarie River beyond its marshes and discovered the Darling River, correctly deducing that the westward-flowing rivers were its tributaries.

In November 1829 Sturt set out to further explore the western rivers and to determine where the Darling flowed. He hoped that the rivers drained into a central sea. His subsequent discovery of the Murrumbidgee-Murray-Darling river system, and his journey down the Murray to Lake Alexandrina and back, established him as Australia’s pre-eminent explorer. He described fertile river flats between the lower Murray and the Mount Lofty Ranges in his book Two expeditions into the Interior of Southern Australia (1833), and he believed that this may have had some influence on the decision to colonize South Australia.

On 20th September 1834 Sturt married Charlotte Greene in England and retired from the army due to ill health incurred in his explorations. He surrendered his pension in return for a grant of 5,000 acres of land in New South Wales. In the following years he would be driven to seek financial security for his family. In 1838 Sturt overlanded stock to South Australia but his hopes of making a handsome profit were not realized. However, Governor George Gawler offered him the post of Surveyor-General. Sturt sold his New South Wales properties and established his home at ‘The Grange’ in Adelaide. Meanwhile the Colonization Commissioners in London appointed Edward Frome to the same post and consequently Sturt was made Assistant Commissioner of Lands on a reduced salary. In 1841 George Grey was appointed Governor, much to Sturt’s displeasure as he believed he had been passed over for the younger man.

In June 1844 permission was given for him to lead an expedition to seek the north-south watershed that appeared to exist between South Australia and New South Wales. This was discovered, although it was not recognized as such, in a series of harrowing journeys. Sturt failed to find the inland sea he had sought for so long but did discover Cooper’s Creek. Ultimately repelled by the dunes and gibbers of the deserts, he was forced to return to Adelaide due to scurvy and failing eyesight. He was sympathetic to the Aborigines he encountered in all of his expeditions, realizing that great changes to their way of life would result, an attitude he shared with his great friend and fellow explorer Edward Eyre.

After the publication of the account of his expedition, Sturt resumed the post of Colonial Treasurer, later becoming Colonial Secretary, but his temperament unsuited him for the hurly-burly of politics. In 1847 the Royal Geographical Society of London awarded him their Founder’s Medal and in 1851 he retired and was granted a pension of £600 a year for life. He left South Australia in 1852 and spent the remainder of his life in Cheltenham, England, but continued to seek postings in Australia. Charles Sturt died on 16th June 1869, only shortly before his knighthood was gazetted. His widow Charlotte was allowed to bear the title of Lady Sturt.

Two state emblems, Sturt’s desert pea (South Australia) and Sturt’s desert rose (Northern Territory) honour his name. A fine statue of the explorer stands on the north-west corner of Victoria Square, and his former home, ‘The Grange’, is administered by the Charles Sturt Memorial Museum Trust. 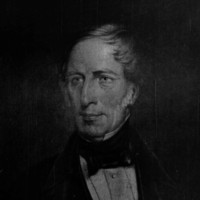 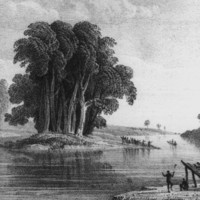 ‘Junction of the supposed Darling with the Murray’
Courtesy of/Photographer:Drawn by W Purser from a sketch by Captain Sturt 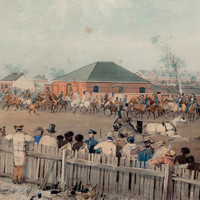 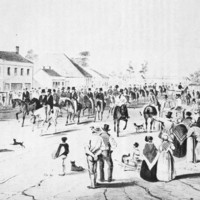