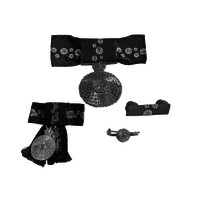 Isla Milne Shilton OAM (nee Grant) was born in Adelaide in 1922 and went to live from a few weeks of age with her parents on their farm at Sandalwood in the Mallee region of South Australia.  From an early age Isla was involved in the work of the farm and in 1942 she married a farmer from the same region, John (Jack) Shilton.  Isla and Jack leased a property near Sandalwood for three years before purchasing it in 1949.  They farmed at Sandalwood until the mid-1970s.

Isla joined the Sandalwood branch of the Women’s Agricultural Bureau (WAB) in the early 1950s and remained an active member of WAB for more than 50 years, holding executive positions, serving as a councillor on the state WAB, attending and speaking at conferences.  In 1971 she was part of a delegation of WAB representatives who met with the Minister and retailers to demand access to cheaper machine-washable wool.  She was also active in the organisation Associated Country Women of the World (ACWW).

Following Jack’s death in 1976 Isla left the farm at Sandalwood but remained living regionally and continued her long and dedicated involvement with the WAB and the ACWW.  She attended and spoke at conferences, including international events in, among other places, New Zealand, Germany and the Netherlands.

Isla had a long history of involvement in the agricultural community and with the WAB and other country women's organisations.  She was awarded her OAM in 1994.  The award citation says

For service to women, particularly through the Women's Agricultural Bureau, Sandalwood Branch and the Country Women's Association, Borrika Branch

Isla often wore the lapel badge from the insignia set.

OAM insignia set in original presentation box.  The pieces included are the full size and miniature insignia on ribbons, the ribbon bar, and the lapel brooch.  The lapel badge is missing from the set. 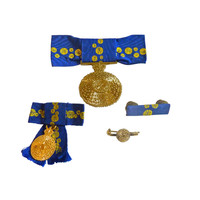 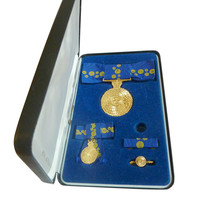