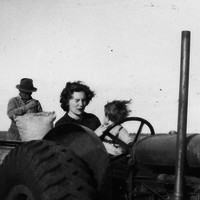 Isla Milne Shilton OAM (nee Grant) was born in Adelaide in 1922 and went to live from a few weeks of age with her parents on their farm at Sandalwood in the mallee region of South Australia.  From an early age Isla was involved in the work and life of the farm and in 1942 she married a farmer from the same region, John (Jack) Shilton.  Isla and Jack leased a property near Sandalwood for three years before purchasing it in 1949. They farmed at Sandalwood until the mid 1970s.

This photograph, taken in 1949, shows Isla at the wheel of the tractor on the farm she ran with husband Jack.  Isla was no stranger to driving having had her licence from the day she turned 16.  The child sitting on her lap is son Robert.

This photograph was taken at about the time when Isla and Jack were transitioning from using horses on the farm to using a tractor.

In Isla’s memoirs published in 2012 she says:

'We had to make the change from horses to tractor.  It was a slow process.  I think Robert was almost two.' 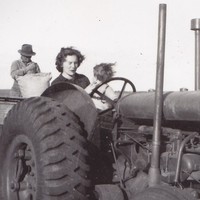