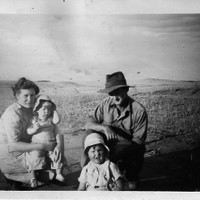 First crop on the Shilton farm

Isla Shilton with husband Jack and their first two children pictured with their first crop on their farm Tanah Tenggal.

Isla Milne Shilton OAM (nee Grant) was born in Adelaide in 1922 and went to live from a few weeks of age with her parents on their farm at Sandalwood in the Mallee region of South Australia.  From an early age Isla was involved in the work and life of the farm and in 1942 she married a farmer from the same region, John (Jack) Shilton.  Isla and Jack leased a property near Sandalwood for three years before purchasing it in 1949. They farmed at Sandalwood until the mid 1970s.

This image shows Isla as very much a part of the success of the farm that she and Jack worked.

Photograph of Isla and Jack Shilton with their sons Robert and Graham. They are squatting down in front of their young first crop of field peas in 1948. 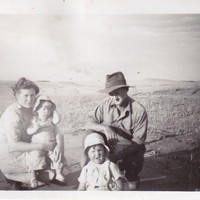 Isla with Robert, Jack and Graham Shilton with their first crop growing on their farm
Courtesy of/Photographer:image courtesy of Annette Turner (nee Shilton)