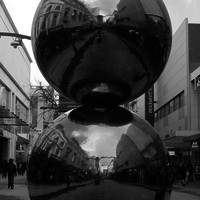 Spheres was designed by Bert Flugelman (1923–2013) especially for the bustling surroundings of Rundle Mall. The sculpture, comprising two highly polished, stainless steel balls standing one on top of the other, ‘takes in everything around it. The more that goes on in the mall the better the work is’ said the sculptor (Klooster & Bellamy, p26).

Flugelman wanted the balls to be touched and physically enjoyed by the public:

That’s why I like it. Kids go for it, they touch it, smear it and become part of it. Everybody can respond to it … After we put it up on the Sunday afternoon I went back on the Monday to watch community responses to it. A very little old lady came walking up to it and looked at it and then she opened up her handbag and took out her handkerchief and blew on the work and wiped it. I thought it was wonderful. I thought that’s alright. It works! (Flugelman in Klooster & Bellamy, p26)

Herbert (Bert) Flugelman was born in Vienna, Austria on 28 January 1923 and migrated to Australia with his family in 1938. After working in the bush and serving in the Australian Army (1943–46), Flugelman studied at the National Art School, Sydney (1948-51). He then travelled and worked overseas. In spite of contracting polio, Flugelman held successful exhibitions at the Piccadilly Gallery in London and Bourne Gallery in New York. He returned to Australia in 1955.

Between 1972 and 1983 Flugelman lectured at the South Australian School of Art, eventually heading the sculpture section. During this time he was one of four artists approached by the Adelaide City Council for the design of an artwork to be located in Rundle Mall.

His successful design measures 4m high, with each sphere 2.15m in diameter. Largely funded by the Hindmarsh Building Society to mark its centenary, Spheres was presented to Adelaide by A Adcock, the company's chairman, and unveiled in Rundle Mall on 5 October 1977.

Bert Flugelman died on 26 February 2013 at Bowral, New South Wales shortly after the City Council announced that Spheres would be relocated off-centre in a redevelopment of the mall. 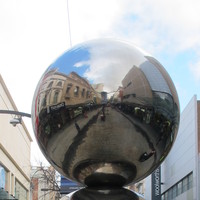