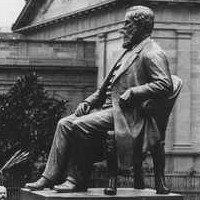 The statue of Sir Walter Watson Hughes commemorates one of the founders of the University of Adelaide and its first donor. In 1872 Hughes donated £20 000 to higher education in South Australia, which enabled the establishment of its first (and Australia’s third) university two years later. Hughes founded the chairs of classics, English language and literature, and mental and moral philosophy.

Walter Watson Hughes was born in Fife, Scotland. He began work as an apprentice cooper before whaling for several years in Arctic waters. Hughes then travelled to Calcutta where he bought the brig Hero trading in opium around the Indian Ocean and China Sea for 14 years. On his arrival in South Australia in 1840 Hughes bought pastoral properties, farming sheep in the Mid North and on Yorke Peninsula.

Hughes was interested mineralogy and was convinced that mineral reserves could be found on Yorke Peninsula. His shepherds were instructed to keep an eye out for evidence of deposits. One, James Boor, reported a sighting of green rocks on the property near Wallaroo in 1859. Hughes established a copper mine there the following year and became the largest shareholder in the Wallaroo Mine Co. In 1861 another shepherd, Patrick Ryan, found copper on Hughes’ Moonta property. This find attracted rival claimants, but their attempts to register their claims in Adelaide were thwarted in a race with Hughes’ horsemen. Legal action against Hughes was finally settled by him making substantial payments to his rivals and the validation of his lease by legislation in 1868–69. By 1877 the Moonta Mine had become the first Australian company to pay £1 000 000 in dividends. Hughes, the largest shareholder in the Wallaroo Mine and Moonta Mine companies, was thus a very wealthy man.

Hughes invested his wealth and used it for public purposes. In addition to making a substantial contribution towards establishing the University of Adelaide, Hughes, together with Sir Thomas Elder, funded the Warburton Expedition of 1872–1874. Peter Egerton Warburton led the first successful European expedition, which crucially included two ‘Afghan’ cameleers and an Aboriginal man, from Alice Springs through the Great Sandy Desert to the Western Australian coast.

Hughes returned to England permanently in 1873. He was knighted in 1880 for his services to South Australia. He died in Chertsey, Surrey on 1 January 1887.

Several years later, two South Australian nephews of Hughes, John James Duncan MLC (1845–1913) and Walter Hughes Duncan MP (1848–1906), agreed to fund a memorial to their uncle. In conjunction with the university, it was determined that the memorial to Hughes would be in the form of a statue located outside the first university building, the Mitchell Building, on North Terrace. The wall of the university on North Terrace had to be moved to provide space for the large statue.

The bronze figure of Hughes was made by Francis Williamson (1833–1920). This Englishman was reputed to be Queen Victoria’s favourite sculptor. He had created works for her in addition to sculpting portrait statues, busts and memorials for other clients. The pedestal for the figure was also designed by Williamson.

The making and carting of the red granite pedestal was newsworthy. It was the largest block of Murray Bridge granite ever brought to Adelaide. The stone measured more than 2.1m by 1.5m by 1.8m and weighed between 9100kg and 11 200kg, making it very difficult to handle. Twenty horses, assisted by block and tackle, were required to drag it from the quarry at Swanport to the Murray Bridge wharf. The journey was about 6km, but took three days. No crane on the wharf could handle such a weight, so the stone was hauled on planks across the platform and into a rail truck for the journey to Adelaide. Special scaffolding had to be erected in the Waymouth Street workshop of monumental mason W Laycock to enable the artisans to work on it.

The statue was unveiled by Mrs Walter Duncan at a special ceremony on 28 November 1906. Her husband had died suddenly on 12 May of that year as he was returning to South Australia from England. John Duncan presented the statue to the university on behalf of his late brother and himself. The ceremony was attended by Governor Sir George Le Hunte, Chancellor and Chief Justice Sir Samuel Way, Premier Tom Price, Mayor T Bruce and other members of the University Council. In his address Way spoke of the importance of philanthropy to establishing the university and in its work. The Police Band played ‘The Song of Australia’ following the unveiling and the national anthem at the close of the ceremony.

On 22 November 2006 the University of Adelaide re-enacted the 1906 unveiling ceremony. An academic procession from the Mitchell Building to the memorial was led by three members of the Police Historical Society in period costume and a quintet of the Police Band. The procession included the lord mayor, the police commissioner, the university's chancellor and vice-chancellor, and members of the university community. Vice-Chancellor and President Professor James McWha emphasised the generosity and vision of Hughes, and noted the major successes of the university since its inception. Governor Marjorie Jackson-Nelson and two descendants of Sir Walter Hughes, Walter Hughes Duncan and Jock Duncan, completed the unveiling.

On 12 August 2014, an episode of the SBS television series Who Do You Think You Are? revealed that 2014 Australian of the Year and AFL player Adam Goodes is a descendant of Sir Walter Watson Hughes. Goodes, whose mother was a member of the ‘Stolen Generations’, travelled to South Australia to learn more about his family’s heritage. During a visit to the South Australian Museum he was shown a genealogy collected by museum ethnologist Norman Tindale, which showed that the parents of Goode’s ancestor John Sansbury were an Aboriginal woman at Moonta and Hughes. John Sansbury is a direct ancestor of Goodes’ grandfather, Hurtle Sansbury.

John Sansbury and his mother later moved to Point Pearce Mission on Yorke Peninsula. It was here that Sansbury’s mother married Narungga leader King Tommy. King Tommy raised Sansbury as his own son and, according to Narungga oral histories, accepted a pension from Hughes to assist with the boy’s education and upkeep. This included enrolling Sansbury in a school established at the mission in 1866. For the rest of his life, John Sansbury led a life which included both his traditional Aboriginal culture and European schooling. Sansbury’s son Edward would later marry Jessie Johnson, an Adnyamathanha woman and Adam Goodes’ great-great grandmother.

During the Who Do You Think You Are? episode, Goodes is filmed standing before and discussing the statue that commemorates Sir Walter Watson Hughes’ role as a founder of the University of Adelaide. 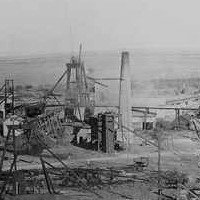 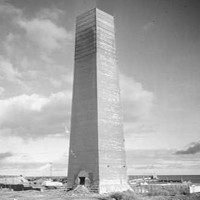 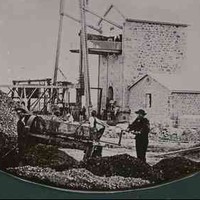 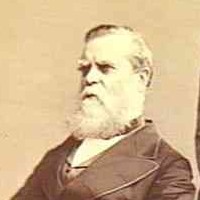 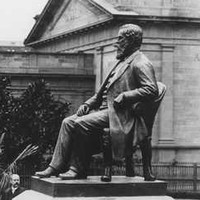 Image courtesy of the State Library of South Australia SLSA: B 55265, Public Domain 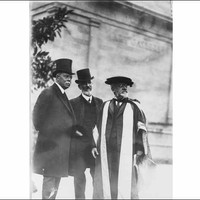 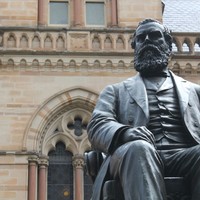