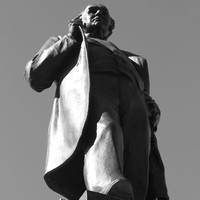 The statue of Sir Thomas Elder (1818–97) in front of Elder Hall commemorates an outstanding benefactor to both the University of Adelaide and the South Australian community.

This wealthy businessman, pastoralist and parliamentarian facilitated the establishment and growth of South Australia’s first university through his generous donations totalling around £100 000, an extraordinary amount in the nineteenth century. From 1874 to his death in 1897, Elder endowed chairs in mathematics, general science and music, made substantial contributions to a school of medicine and funded prizes in physiology. Elder was passionate about music. In 1883 he funded an annual scholarship for South Australian students to the Royal College of Music in London and he bequeathed £20 000 for the building of a school of music (later the Elder Conservatorium of Music).

Soon after Elder’s death, Adelaide merchant George Wilcox began organising within business and government circles for a statue to commemorate his life and work. This led to prominent people gathering in the Mayor’s Reception Room of Adelaide Town Hall on 28 March 1898 to discuss Wilcox’s proposal. The meeting was chaired by Governor Buxton who praised the generosity and community spirit evident in Elder’s donations to education, the sick, the aged, music, churches and art. He noted that Elder was responsible for introducing the camel to South Australia, which had proved invaluable in exploration and settlement.

Chief Justice Sir Samuel Way observed that a statue commemorating Sir Thomas Elder would add to the city’s small number of public sculptures. Sir Edwin Smith MLC concurred, suggesting a location on North Terrace in front of the University of Adelaide would not only recognise the major donations Elder had made to the university, but also constitute one of several possible statues along the thoroughfare. A motion by Way, ‘That it is desirable to recognise the munificence and public services to this province of the late Sir Thomas Elder, G.C.M.G., by the erection of a statue in his honor’, was passed with acclaim.

A committee was formed to raise funds and to commission the statue. This large group included notables such as Postmaster-General Sir Charles Todd, the Bishop of Adelaide, Mayor Charles Tucker, members of parliament and leading businessmen. An executive committee consisting of Wilcox, Way, Smith, John Darling MP, lawyer and businessman AG Downer, and businessmen H Muecke and David Murray agreed to coordinate activities.

The estimated cost of the statue was £1500 or about 1% of the amount that Elder had bequeathed to various organisations in his will. Money was raised through donations and a ‘grand musical fete’ held in the Jubilee Exhibition Building on 3 September 1898. The fete was reported to be ‘one of the most important and complete concerts yet held in the city’ and featured the Conservatorium Grand Orchestra, the Orpheus Society, the Adelaide Choral Society, the Adelaide Liedertafel and solo artists. The governor was received with a fanfare of trumpets.

James White, a prominent Sydney sculptor, approached the committee with a view to creating the statue. White was a fervent advocate of commissions for public statuary being awarded to Australian artists. However, Sir Samuel Way rejected his proposal as ‘impudent’ (Cameron, p31). Way favoured some ‘competent’ English sculptor. The committee agreed and English sculptor Alfred Drury (1856–1954) was chosen through South Australia’s agent-general in London.

Drury took some time to complete the statue because of other commissions marking the coronation of King Edward VII. The 2.86m high bronze statue of Elder finally arrived in Adelaide on the SS Wilcannia on 9 June 1903. The imported 3.76m high pedestal of Aberdeen marble, which cost £266 and was ‘the gift of an anonymous donor’, had been erected on the lawn in front of the Elder Conservatorium of Music in 1902 (Cameron, p35; Advertiser, 30 July 1903).

The statue was unveiled on 29 July 1903 by Governor Le Hunte at a ‘gala occasion’ with numerous prominent citizens attending. A choir of students from the conservatorium sang the ‘National Anthem’ and the ‘Song of Australia’. Sir George Ruthven Le Hunte outlined the life and times of Elder. Premier John Jenkins said it was not necessary to expand on Elder’s virtues as ‘the city of Adelaide would be barren of many of its adornments had it not been for his princely generosity’. To which Sir Edwin Smith, the statue committee’s treasurer, added that Elder ‘had probably done more than any other man to build up a nation under the Southern Cross’.

Facing away from Elder Hall and the university, Sir Thomas Elder looks imperiously across a small lawn to North Terrace. While his pose was said to be in keeping with the man, the statue’s prominence is less so – Elder never married and was said to be a retiring fellow, not one who sought the limelight. As well as bearing a very simple plaque inscribed with the barest details of Elder, the pedestal features three bronze friezes. Various interpretations have been made of them. Perhaps the frieze on the eastern side shows the muses with ‘Painting, Music and Literature in foreground and Sculpture peeping from behind’ (Cameron, p35). The western frieze shows a female figure holding a model of the university’s Mitchell Building, flanked by a mother and child, and the figure of Medicine, which may symbolise ‘the giving of today’s children to the care of the university, producing the esteemed professionals of the future’ (Cameron, p35). The northern frieze depicts inland exploration with a camel train. 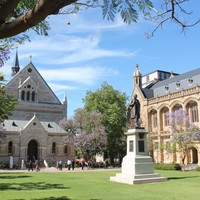 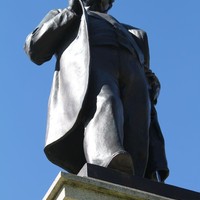 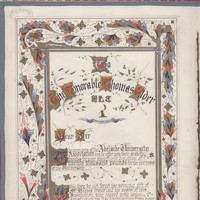 Page two of an illuminated manuscript presented to Sir Thomas Elder in 1874 in recognition of his support to the University.

Courtesy of the University of Adelaide, Rare Books and Special Collections. 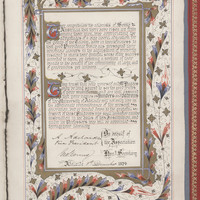 Page three of an illuminated manuscript presented to Sir Thomas Elder in 1874 in recognition of his support to the University.

Courtesy of the University of Adelaide, Rare Books and Special Collections.

Associated with:
Elder Hall
Located at:
The University of Adelaide