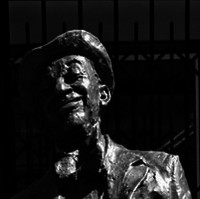 Roy Rene died in Sydney of a heart condition 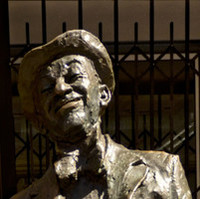 The Lord Mayor of the City of Adelaide unveiled a statue of Rene on the street of his birth, to commemorate his influence on the development of Australian art and entertainment

The life size sculpture of Roy 'Mo' Rene on Hindley Street invites intimacy with his casual pose and expression of comic amusement. Set on the street where Roy Rene was born, the sculpture is a monument to his career as a vaudeville performer.

Born Harry van der Sluice, Roy Rene became best known for his character 'Mo McCackie'. His career started at age ten when young Harry won a singing competiton. His first 'professional' performance was in 1905, at thirteen years old, as a singing and dancing extra in the blackface pantomime Sinbad the Sailor at the Theatre Royal on Hindley Street. He performed in several Adelaide theatres before his family moved, later that same year, to Melbourne where Rene studied performance art.

Following limited success in Melbourne he moved to Sydney where he reinvented himself and in 1910 changed his name to Roy Rene. His career took off with sold-out shows across Australia during the 1910s and 1920s, a starring role in the film Strike me lucky in 1934 and a role hosting Australia’s popular radio show 'McCackie Mansions' in the 1940s. Some of his popular catchphrases, such as ‘Don’t come the raw prawn with me’ and ‘You little beauty!’, have been immortalised in Australian slang. Often hailed as one of Australia’s best comic performers, Rene is sometimes referred to as 'the first national Australian celebrity'.

The sculptor Robert Hannaford was commissioned to create the work by the City of Adelaide as part of its Public Art Program. He told the Council:

I had fond memories of Roy Rene when I was growing up. Crafting a sculpture that represents this iconic comedian is a great honour.

Hannaford built the sculpture in a month, first creating a scale model, then building a mold in clay before the final casting in bronze.

The sculpture was unveiled on 4 March 2010 by Lord Mayor Michael Harbison.  He described this depiciton of 'Mo' as ‘... a bit like the Rundle Mall pigs, but for grown ups’. 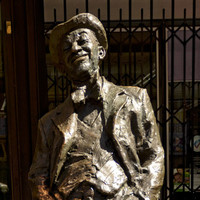 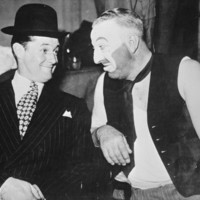